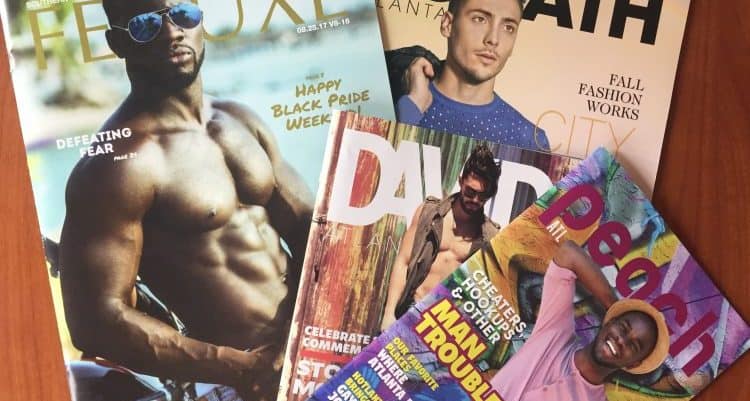 Inside the cover, some familiar names graced the pages. Mike Fleming, co-owner of Project Q, editorial director of David Atlanta and Goliath is named editorial director. William Duffee-Braun, co-founder of Fenuxe, sales and development director for David and publisher for Goliath, is the publisher and registered agent for Peach ATL Media, LLC.

Or, well, they were.

Barely a month after the first issue — a complete rebrand of the now-defunct David Atlanta, Peach ATL is under new ownership. So is Goliath Media LLC. And the name of the new registered agent for both may sound familiar to the Atlanta LGBT community: Brian Sawyer.

“Peach will taste familiar and all good. Atlanta will not skip a beat on its weekly guide to gay culture, clubs and cocktails, boys and beers, DJs and drag,” Fleming promised in the debut issue. “[Duffee-Braun] and I are confident that our mix of skills and experience is the right one to keep the good traditions alive while forging new ones — not only in the weekly print publication, daily website and social media presence, but in our personal commitment to the community, its organizers and its events.”

Duffee-Braun announced on Facebook that he’s leaving gay media, and around that time, new documentation was filed with the Secretary of State that showed him resigning as registered agent for Peach ATL Media. By Aug. 30, both Duffee-Braun and his partner, art director Tanner Gill, who also worked for David Atlanta and Goliath, were off the masthead.

Fleming followed soon after. His last day with Peach ATL and Goliath was Sept. 8, though he remains a co-founder of Project Q Atlanta.

According to the Secretary of State’s office, Sawyer’s role as registered agent is the “mailbox” for Peach ATL and Goliath, meaning he is the person to receive “any service of process, documents or other official communication” on behalf of the business.

Neither of the companies has officers — chief executive officer, treasurer and secretary — listed on as part of their business registrations, only the registered agent.

Neither Duffee-Braun nor Fleming would speak to Georgia Voice about the business shakeup, nor their decisions to leave Peach ATL and Goliath. Attempts to reach Sawyer and his attorney, Todd Poole, were unsuccessful as of press time, so it is unclear the exact events that led to the change in leadership.

An illness and a lawsuit

When Peach ATL launched, notably absent from the masthead was the name David Thompson. Thompson, who also did not return calls as of press time, is the CEO, chief financial officer and secretary of DRT Media Group, Inc., the company that published David Atlanta prior to its being rebranded as Peach ATL. DRT Media Group also published Goliath.

In his first Peach ATL letter, Fleming said Thompson is the only person of the former David staff to not be at Peach.

“It was his decision to move on from the publication that prompted [Duffee-Braun] and I to start the new company,” Fleming wrote. “Ultimately, illness influenced his decision to shut down operations and takes him away from his daily duties. … [Thompson] remains in Atlanta as a business consultant while he takes care of himself as much as he has of others. The transition provides him more time to fight some of the burdens that contributed to his illness.”

It is likely that one of those burdens is a lawsuit filed against Thompson, DRT Media Group, David Atlanta and the former SOVO, Inc. A plaintiff in that lawsuit?

Sawyer — the very same individual who is now in charge of Peach ATL and Goliath.

In May 2014, Sawyer, along with Charles “Chip” O’Kelley, Martin Marshall (the legal name of Matt Neumann) and ASHC, LLC, filed a verified complaint in DeKalb County.

According to the complaint, Thompson seized the assets of David Magazine, “a company in which he relinquished his minority ownership” and transferred those assets to DRT Media, of which he is the sole owner.

“Along the way, Thompson and DRT Media, individually and through their exercise of control of the other defendants, breached several agreements and transferred assets to avoid obligations and fiduciary duties to Plaintiffs,” the complaint reads.

The lawsuit, which is still an open case, involves a lot of back-and-forth between Thompson and the plaintiffs, all of which Thompson claimed in a 2015 deposition “has an effect” on the high blood pressure plaguing him for the last three years.

“It creates stress, which creates high blood pressure,” he told attorneys, according to court documents.

A whole lot of history

Thompson isn’t the only one who may have high blood pressure from working with the plaintiffs in his lawsuit. Sawyer and Marshall, at least, have had their hands in a number of Atlanta’s LGBT publications — Sawyer is also the organizer of BMSmedia, LLC, which designs Fenuxe Magazine. Marshall, under his pseudonym Matt Neumann, ran the former Gaydar Magazine and Atlanta Free Press, and for a short period of time, the second iteration of Southern Voice after it was purchased following bankruptcy of its parent company.

Sawyer and O’Kelley were also owners of Atlanta Pearl Day Committee, which hosted a nonprofit benefit at Six Flags Over Georgia, but allegedly never handed over the donations, according to Project Q. Pearl Day was created in 2007 and administratively resolved in 2011.

It is unclear at this point how much the lawsuit against Peach ATL’s predecessor had to do with the plaintiff in that case taking over the publication and its brother magazine.