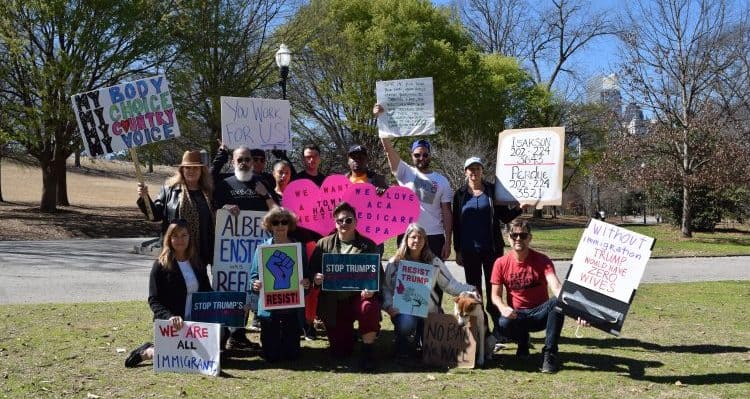 A large number of Georgians, with voting histories across the political spectrum, aren’t pleased with how President Donald Trump’s handling his new job. These post-election sentiments aren’t anything new — not everyone has liked every president — but what is novel is the way people show their disdain.

They’re gathering in front of Congressional offices. They’re sending mail in droves. They’re getting “woke” to the idea that maybe, just maybe, if they get out from behind the bubble of social media rants and hold conversations with elected officials and neighbors, they can make a difference. And they’re doing so in droves.

“We’re really dismayed by many things that are happening right now. Rather than sitting home expressing our concerns on Facebook, we’re getting out,” said citizen activist Caroline Stover.

Even Atlanta’s bakers organized a grassroots “Cookie Grab,” with all proceeds from 500 boxes of treats going toward Planned Parenthood, said Sarah O’Brien, owner of Little Tart Bakeshop. For individuals who want to become politically active, but don’t know where to start, there are groups such as Galvanize Georgia that help point folks in the right direction.

“Figuring out where your time is best spent is the hardest part,” said Rich Levy, one of several cofounders of the group Galvanize Georgia. “Find trusted sources, whether it is groups like ours or following political beat reporters at the [Atlanta Journal-Constitution], whether it’s joining an Indivisible group or doing the diametric opposite of that. There are people who don’t want to be confrontational, but that doesn’t mean there isn’t a role.”

“The one thing that Donald Trump has done for this country is to get people involved in a democracy again,” said Linda Meredith, one of the five organizers behind the Isakson Accountability Coalition and former founder of ACT UP.

“Our whole idea is that what Johnny Isakson … is legislating in Washington, DC, is in no way in the best interests of Georgians,” Meredith said. “We spent a lot of time researching some of his votes since the December Congress began and we paired that with information and data on how Georgians will be impacted by that.”

Meredith chose to focus on Isakson because he’s the senior senator from Georgia with “real impact” in what the Republicans do in Congress. Some of the issues the group plans to address are Isakson’s “avid adulation for Tom Price,” his “cheerleading for Jeff Sessions” and his position on healthcare. Even though Meredith is a lesbian, she said her group isn’t bringing up LGBT rights or “religious freedom” legislation in their messaging just yet because he hasn’t spoken out about them.

Stover, on the other hand, is the organizer of the weekly rallies in front of Sen. David Perdue’s Atlanta office.

Nearly 150 people showed up to the first rally at Perdue’s office, touted as part of the “Resist Trump Tuesdays” movement. Originally Georgians gathered to raise concern about the president’s cabinet picks, but as the weekly event evolved, it’s become more of a call to action for Perdue to take time and meet with his constituents.

“He says that our rallies are manufactured or that we’re being paid to be there. We really feel that is an incredibly insulting position for our elected official to take, when really we’re a large group of constituents asking for some time with him,” Stover said.

Because Perdue is supportive of the Trump administration, she said it’s important he know not all of his constituents agree with measures they are taking, including the oft-mentioned Religious Freedom Restoration Act and the recently rescinded transgender bathroom guidance documents for schools.

“We know that we don’t have a lot of ability right now to affect a lot of what’s happening in Washington DC because we’re in the minority. That is not going to stop us from holding our elected officials accountable for everything and anything,” Stover said.

And in north Georgia, Athens 4 Everyone is hard at work putting pressure on Rep. Jody Hice, the Congressman who represents the Classic City, to hold a town hall as well.

“We have scheduled our own town hall for Jody Hice. Rep. Hice has been invited, his staff has been notified and we already have 500 people,” Organizational Coordinator Tim Denson said.

There are also political actions that don’t require in-person rallies, or even the ability to walk: groups nationwide started organizing postcard parties.

“It is something that allows people who may be homebound, who can’t march, to send a message,” said Louis Gary, a gay activist who heads up the Postcard Pink Slips project. “We get feedback from housewives who are not physically fit or mobile at this time and have other responsibilities that don’t allow them to participate. They say this is such a wonderful idea.”

Even if they don’t make it to the Oval Office, Gary said the National Archives collects a sample of activists’ mail to elected officials for posterity’s sake.

Pink slip postcards are being sent to the White House and Steve Bannon, the president’s chief strategist. They will be mailed on the Ides of March, also a symbolic gesture. Historically, March 15 is revered as the day Julius Caesar was murdered.

“We all know that a pink slip is a termination slip and it’s a type of messaging, so that we can send them a pink slip and put them on notice that we think they are not suitable for the job description,” Gary said. “The messaging has to do with a lot of things we saw during the campaign: sexism, inappropriate and illegal touching of women, warmongering, separatists, xenophobia, homophobia, the whole debate about what is going on with illegal immigration and how we are dealing with it as a nation.”

Another Atlanta group, Postcards from the Edge, sends mail to the White House, to Congress, to Speaker Paul Ryan, to Mitch McConnell and to Georgia’s Congressmen. On Super Bowl Sunday, about 40 people came to Noni’s restaurant on Edgewood Avenue and wrote about 500 postcards. The event was so successful that organizer Alli Royce Soble decided to make it a monthly event. Soble, who identifies as gender queer and nonbinary, said after the election she felt her rights were being “tampered with.”

“For the first time in a while I felt like I had to put my activist hat on,” Soble said. “When I feel like there’s an anti-Semite running the country who has a cabinet who is anti-this, anti-that, and I kind of fall under several of the antis as a woman, as a gay person, as a nonbinary person, as a Jew. I’m kind of like, what can I do to help?”

She said to be effective, activists must “flood them at their front doors.”

“It’s clear that people are clearly unhappy with what’s going on,” she said. “Even if they don’t read one of them, and take it and toss it in the trash, it’s worth the effort to drop a huge stack of paper on someone’s desk and say, this is all from Atlanta. These people are pissed.”

“Social issues are really civil and human rights issues and those should be federally mandated. I don’t think a ‘social issue’ that has to do with transgender students should be determined on the state level,” Stover said. “We have to remember we’re a human community.”

That sentiment is a driving force behind Athens 4 Everyone, a community organization that began several years ago but became more involved with politics after the 2016 election.

“We still try to focus on issues that impact the lives of Athenians somehow. Since November, we have expanded that out a little more just because there are so many things coming down from the federal level,” Denson said. “The organizing efforts have had to really kick up for us and people are just coming out of the woodwork. Our membership has tripled in the last three months … all of a sudden, people saw us as a way to jump in.”

A far cry from its major project to get Athens-Clarke County bus service on Sundays, Athens 4 Everyone organized an Inauguration Day protest that ended up being the largest march in the city’s history.

And despite questions raised during the initial large-scale, grassroots responses to Trump, such as the Women’s March on Washington and similar marches held worldwide, about how inclusive such protests are, the human community aspect is moving in a positive direction. Gabrielle Claiborne and Linda Herzer, who co-own Transformation Journeys Worldwide, travel the country speaking about the transgender experience and reminding people that it is just another human experience. Claiborne, who is transgender, will speak later this month to the National Pride March group about making sure its mission and outcome are trans-inclusive, and there are already groups in Georgia making strides in similar ways.

“There are groups that are taking steps,” Herzer said. “It’s important to point out and to recognize when people are being left out, but we’d like to be a voice commending those who are making efforts to include trans voices.”

New LGBT-led groups continue to spring up as the need is seen to counter what’s going on here in Georgia and around the nation. ATL Activate is one such effort, formed after the inauguration and operating through a closed Facebook group to share daily action steps, post relevant news stories and facilitate community engagement and action. The group also hosts semi-weekly walk-and-talks through Piedmont Park, and Prima Printing owners (and husbands) Chad Sims and Angel Marcelino allowed the group to utilize a 4,000 square foot warehouse behind Prima’s Midtown office as organizational headquarters and a monthly meeting space. The group’s first coordinated action is supporting 6th Congressional District candidate Jon Ossoff in the Democrat’s bid to flip new Health and Human Services Secretary Tom Price’s former district. Members held a fundraiser featuring Ossoff at a private Midtown residence on March 2.

And yet another new LGBT-led grassroots group is Civic Minded Citizens, a group led by gay Atlanta man Lukis Newborn. They host a legislative update with LGBT state Rep. Park Cannon (D-Atlanta) and Sam Park (D-Lawrenceville) along with Georgia Equality Executive Director Jeff Graham on March 4 at Joe’s on Juniper, and are helping organize the March for Science Atlanta taking place April 22.

This initial onslaught of grassroots activism is larger than perhaps any other in modern post-election history. What remains to be seen is whether those involved can keep up this level of momentum as President Trump’s first – and as these activists hope, only – term continues.