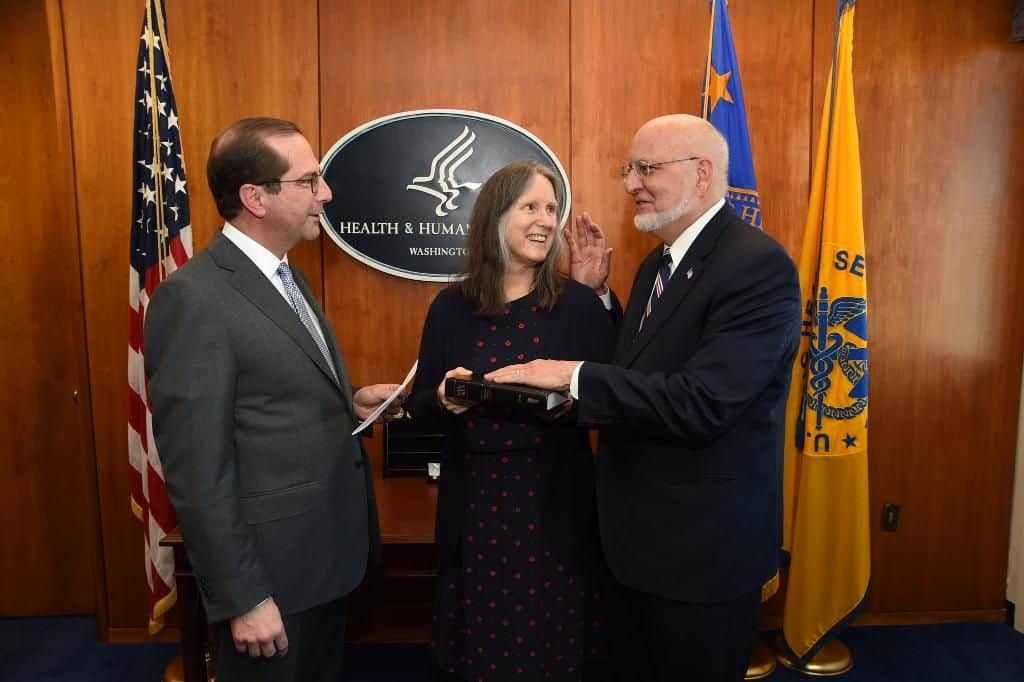 President Donald Trump appointee Robert Redfield Jr., a longtime AIDS researcher, was sworn in as the 18th Director of the Centers for Disease Control and Prevention (CDC) on March 26. Reaction to news of Redfield’s appointment was mixed. Opponents have criticized Redfield on three grounds: his participation in the Trump administration, his inexperience running a large public health organization and controversies in his early career. However, local HIV groups were supportive.

As the nation’s premier health protection agency, the Atlanta-based CDC is a pillar of the global health system. Redfield’s appointment was announced on March 21 by Health and Human Services Secretary Alex Azar II. Redfield, 66, has garnered wide respect for his many years of clinical work, including a 20-year stint at the Walter Reed Army Institute of Research.

Prior to his appointment, Redfield, an infectious disease specialist, was a professor at the University of Maryland. While there, he helped to manage a Baltimore treatment network which cared for patients with hepatitis C and AIDS. During the second Bush administration, he served in an advisory capacity at the National Institutes of Health and worked for four years on Bush’s Advisory Council on HIV/AIDS.

In his career, Redfield has been at the cutting edge of AIDS research. He pioneered therapeutic treatments for AIDS and HIV infection and worked to create the staging system now commonly employed for HIV treatment. He co-founded the University of Maryland’s Institute of Human Virology.

Past controversies concern some

In the 1980s, as the official in charge of Army AIDS research, Redfield argued that military testing for the disease ought to be mandatory. According to a March 12, 1989 article in the Los Angeles Times/Newsday, there were special barracks at Fort Hood known as the “HIV hotel” and “the leper colony,” to which “scores” of soldiers were transferred. “Along with the pain of discrimination comes the fear of being discharged and left without medical coverage,” wrote Laurie Garrett.

Last month, Garrett attacked Redfield in a Foreign Policy feature, calling him “homophobic” and a “quack.” In the 30 years since Fort Hood, Garrett wrote, “About five million soldiers and recruits were tested by 1989, with 6,000 of them proving HIV-positive. Anecdotally, many of these young men committed suicide, and most were drummed out of the military without medical coverage, dying impoverished from their AIDS disease.”

In the early 1990s, Redfield was criticized for allegedly misrepresenting data. Opponents charged that he had done so to bolster his preferred AIDS vaccine, VaxSyn. Redfield was later cleared of scientific misconduct. His continued connection with the conservative, evangelical Children’s AIDS Fund has also raised eyebrows.

However, many medical professionals, public health colleagues and other luminaries in the field praised the clinician as an excellent choice. According to Science magazine, James Curran, previous chief of the CDC’s HIV/AIDS program and current dean of Emory’s Rollins School, praised Redfield: “It’s nice to have someone competent and committed to HIV/AIDS … Most of the bad things he was associated with were quite a while ago and, unlike some of the people involved with AIDS in the beginning, he’s been really, really committed for a long period of time.”

Robert Gallo, who played a role in discovering HIV and co-founded the Institute of Human Virology with Redfield, also praised the director to Science. Gallo called Redfield “a dedicated and compassionate physician who truly cares about his patients.”

Atlanta locals were generally positive about Redfield. Michael Weinstein, president of AIDS Healthcare Foundation, told Georgia Voice, “We are encouraged that someone with a deep background in HIV is running the CDC. We look forward to working with him to counter the faltering effort to stop the rising tide of HIV and other STDs in the United States, and we trust that he will be guided solely by scientific evidence rather than any external considerations.”

Larry Lehman, the CEO and president of Positive Impact Health Centers, told Georgia Voice that he was excited to see “someone with an HIV background in the CDC.”

“There’s a major epidemic in this city,” Lehman said. “In his introductory speech, Dr. Redfield said that he could end it in seven years, and I would love to see that plan.” Pre-exposure prophylaxis, or PrEP, is a daily medicine regimen taken by people who are at a high risk of developing HIV. If done properly, it can lower the chances of infection.

Lehman stressed that PrEP “is not a service that is paid for by the CDC or the Ryan White program, and we need the government to step up and do that. The CDC has a huge push to test everyone, but they’re not paying for PrEP services. If you’re trying to end an epidemic it’s critical for PrEP to become available to everyone.” Regarding Redfield’s controversies, Lehman noted that “There was controversy 30 years ago, but that’s in the past — I think we need some really strong people in leadership roles to make the changes that we need.”