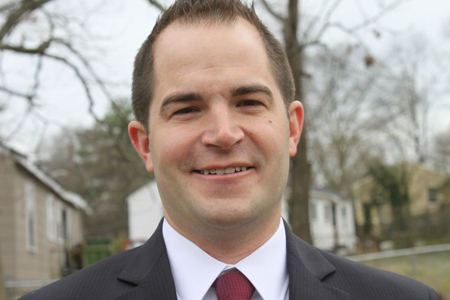 Matt Rinker believes the Atlanta City Council can do better when it comes to stopping crime in neighborhoods and he believes District 5 incumbent Natalyn Archibong is not doing her job.

That’s why he wants it.

Rinker, 35, who described his job as a real estate professional, announced formally Feb. 5 his bid for the seat in the upcoming November election. Rinker is gay and this is his first run for political office. District 5 includes East Lake, Cabbagetown, Kirkwood, Reynoldstown, Edgewood and East Atlanta where gay bars Mary’s and My Sister’s Room are located.

At a press conference at the home of a friend living on Flat Shoals Road in East Atlanta, Rinker, who said he also lives on Flat Shoals Road, spelled out why he believes Archibong should not be returned to the job on the council that she’s held since 2001.

“I’m running for Atlanta City Council because for nearly a decade I’ve watched our great city excel in some areas, and flounder in others. We can and must do more to help Atlanta live up to its full potential,” he said in a statement read at the press conference attended only by a few of his supporters and the GA Voice.

“My opponent, Councilwoman Natalyn Archibong, has been an incumbent politician representing our community since 2001. And she’s done very well for herself — running a private law practice while being a member of the City Council for over 10 years.

“But her accomplishments for our families and our businesses are less clear. On her own City Council website the two accomplishments she focuses on are creating committees to study second hand smoke, and recycling. I put it to you today that our families and our businesses have more immediate problems, and that our community would have benefited tremendously from an active, engaged advocate for all of us on City Council,” Rinker said.

Rinker went on to say that he believes Archibong has not done much to make her district safer from crime.

“Our neighborhoods are no safer for Ms. Archibong’s three terms on council — in fact by most statistics crime is up. Aggravated assault is up. Auto thefts are up. Burglary is up. Robbery and larceny are both up in our neighborhoods.

“Too many of our streets are not a safe place for our kids to play. Too many of our seniors don’t feel safe in their homes. Too many homeowners have to pay large insurance premiums because of the zip code we chose to call home,” he said.

“…[B]y all measures from the outside looking in we’re getting the job done.
Until you talk to the families and business owners in East Atlanta and South Atlanta,” he said.

“And while no one thinks our voice on City Council should be personally patrolling the streets, I strongly believe it is the city council member’s job to work directly with community leaders and law enforcement agencies to make sure our families and our businesses are protected and that our officers have the tools they need to get the job done,” Rinker said.

“But apparently my opponent doesn’t feel the same way.”

Archibong voted in favor of a resolution introduced by Councilmember Alex Wan late last year to support same-sex marriage. That resolution was then supported by Mayor Kasim Reed, who also came out in support of marriage equality. Wan is currently the only openly gay council member and told the GA Voice on Wednesday that he will be running for reelection.

Archibong supported Wan’s initiative last year to ban smoking from outdoor venues, such as Piedmont Park. In 2004, she proposed an ordinance to ban smoking in the city, including in bars, but backed off the ban in bars after complaints from bar owners.

Rinker moved to Atlanta in 2004 from the Virginia suburbs of Washington, D.C., where he was born and raised.

He said he’s been thinking of running for Atlanta City Council for about six months. Although this is his first attempt at public elected office, Rinker said he’s gained experience while volunteering and raising money for organizations including CHRIS Kids, Georgia Safe Schools Coalition, Hosea Feed The Hungry and Project Open Hand.

He is also active in the ATLAS Bowling, GoKickball and the Hotlanta Softball League; he’s been secretary for HSL for three years and helped raise thousands of dollars for local charities.

Rinker said he also has been involved in politics by volunteering on local campaigns. He also volunteered for President Barack Obama and Hillary Clinton’s campaigns.

His father worked in the car industry and was a member of the Steamfitters Union. His mother stayed home to raise him and his three older siblings before she pursued her own college education and became a public school teacher, a job she held for 25 years, he said.

“Hard work, education and giving back to the community were all pretty important in our household and are values I carry with me to this day,” he said.

Right now, Rinker said he plans to conduct a “listening tour” to meet the people of the district and hear about their concerns.

“One of the main things I’m focused on right now is listening to families in the 5th District. You have a very interesting, diverse district. There are longtime homeowners and new homeowners,” he said.

While he hopes gay voters will support him, Rinker said he intends to earn their vote like anyone else’s.

“I have their backs and will always support them. But I intend to earn their vote,” he said.