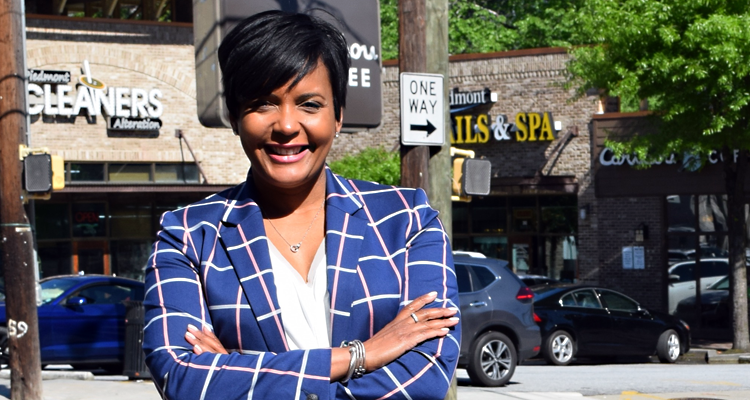 Mayor Bottoms Not Up for Reelection

The past couple of weeks have no doubt been bittersweet for Atlanta Mayor Keisha Lance Bottoms after she announced that she would not run for reelection. Bottoms announced the news via a letter posted to social media on May 6, then elaborated on her decision at a press conference on May 7.

“I wish I could tell you that there was a moment or there was a ‘thing,’ but when you have faith, and you pray for God’s wisdom and guidance in the same way that it is very clear to me almost five years ago that I should run for Mayor of Atlanta, it is abundantly clear to me today that it is time to pass the baton on to someone else,” Bottoms said during the press conference.

She spoke of the speculation making its way through the city as to her possible reasons for getting out of the race, but she assured the audience she was in good health and that her family was okay. However, she alluded to recent events playing a part in her decision.

“[T]he last three years have not been at all what I would have scripted for our city,” Bottoms said. “Three months into our term there was the biggest cyberattack of a municipality in America. A federal investigation that seemed to literally suck the air out of city hall and its past administration. Then, there was last summer, there was a pandemic, there was the social justice movement. There was a madman in the White House.”

Despite all the obstacles and criticism she faced, Bottoms was proud of how the city responded. “What I know is in the absence of speaking my truth — people will insert a narrative, and that is why I am here today,” she said.

Bottoms came under scrutiny after the rise in crimes, especially homicides, in the city. According to the Atlanta Journal Constitution, “authorities investigated 157 homicides last year, the most since 1996, and the violence remains unrelenting. Homicides are up roughly 60 percent from this time last year.” The most recent involved a shooting that left two dead, one of whom was a 15-year-old. Bottoms also came under fire for the handling of the police shooting of Rayshard Brooks in June 2020 in the parking lot of a Wendy’s.

Despite the city’s rising crime rate , Bottoms began her career on a high note and full of optimism. For the LGBTQ community, Bottoms was a supporter early on. In 2018, she appointed the city’s first LGBTQ Affairs Coordinator and formed an LGBTQ Advisory Board, both put in place to advise the mayor on LGBTQ issues. Bottoms’ leadership also caught the attention of now President Joe Biden when she supported him early on in the presidential election.

According to the AJC, “no Georgia Democrat played a more prominent role promoting Biden’s campaign than Bottoms, a first-year mayor who endorsed him in July, campaigned for him in Iowa and worked on his behalf in spin rooms after Democrat debates.” It was even reported that she was vetted as a possible vice-presidential candidate and that she declined a position to serve in Biden’s cabinet.

In an interview with MSNBC host Joy Reid almost a week after her unexpected press conference, Bottoms discussed her future plans after she finishes her term later this year. “I don’t know what next steps are — I’ll be having conversations over the next couple of months,” she said. “As you know, I have a very good relationship with President Biden and the Biden administration. So, I will explore all options.”

“Leaders across this country — we’ve had a very tough few years under our past president,” she continued. “Things are significantly better, but you have to know when it’s time to pass the baton and the time is now for me.”

Now that Bottoms is out, the possible mayoral candidates picking up the baton so far include Atlanta City Council President Felicia Moore and attorney Sharon Gay. Rumors that former Mayor Kasim Reed may also enter the race have also circulated.