Packed up and moved out, YouthPride still has no new home

Movers were to arrive by noon on Friday and have the place cleared out by early evening, according to church officials. However, All My Sons arrived at at the building at about 6 p.m. One of the movers, who did not give his name, was visibly angry because he was told the job would only take a few hours. But after being given a walk-through by a youth who was on-site he said he approximated moving all the furniture and boxes out of the building would take much more time than that. 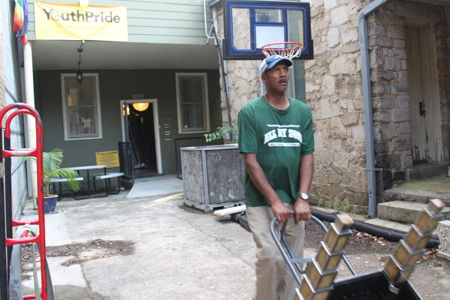 McPhaul was not at the building when the movers arrived. Instead, McPhaul was looking for a storage facility to place YouthPride’s belongings, including furniture, desks and computers. The youth at the building, identified as the administrative assistant and is listed on the YouthPride website as Brandon D., said McPhaul hasn’t told him where YouthPride will reopen on Monday. He declined to give an interview.

The YouthPride employee, at McPhaul’s direction, also called the Atlanta Police Department to  order this reporter from standing outside the building while taking photos and seeking interviews.

“My boss actually called told me and give you the explanation when you got here,” Brandon told the APD officer. “She’s not allowed to be here. He’s asked her many times to not come here and she continues to come here. We’re a youth center and we don’t allow anyone over 24 here unless they are a parent.”

“[Your boss] owns owns this property?” the officer asked.

The officer then learned that Inman Park UMC actually owned the property and YouthPride was located on the church’s property.

“The church owns the property but this is our center,” Brandon told the officer.

“Basically, the church would have to tell her to leave,” the officer explained. “Since the church owns it … and out here, this is the church’s property.”

Shortly after the officer left, a mother and her teen son walked around the large moving truck as items were being loaded into the truck  and asked if this was where YouthPride was located. She said she was bringing her son to attend a discussion group for LGBT youth. YouthPride’s website states Friday evenings there was a “Words of Empowerment” group for LGBTQQ people of color from 6:30-8 p.m.

Brandon came out of the building and told the woman that the organization was closed and messages had been sent out via email, Facebook and Twitter as well as posted on the group’s website. The mother told Brandon that this would have been her son’s first meeting so they were not aware of the closing and not on an email list.

Brandon then told her the facility would reopen Monday. When asked where, he told her it would be announced on Facebook, Twitter, via email and on the website on Monday.

“So we should just look up YouthPride on Facebook?” the mother asked.

Movers said all they knew was they were told they would be taking the YouthPride belonging to a storage facility on Martin Luther King Jr. Boulevard. 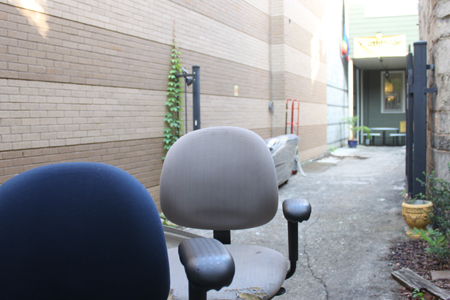 The counterclaim filed by YouthPride against the church claiming the church had not made repairs to the building it has been renting for the amount of $500 per month for 60 months — or $30,000 — was dismissed for being “without merit.”