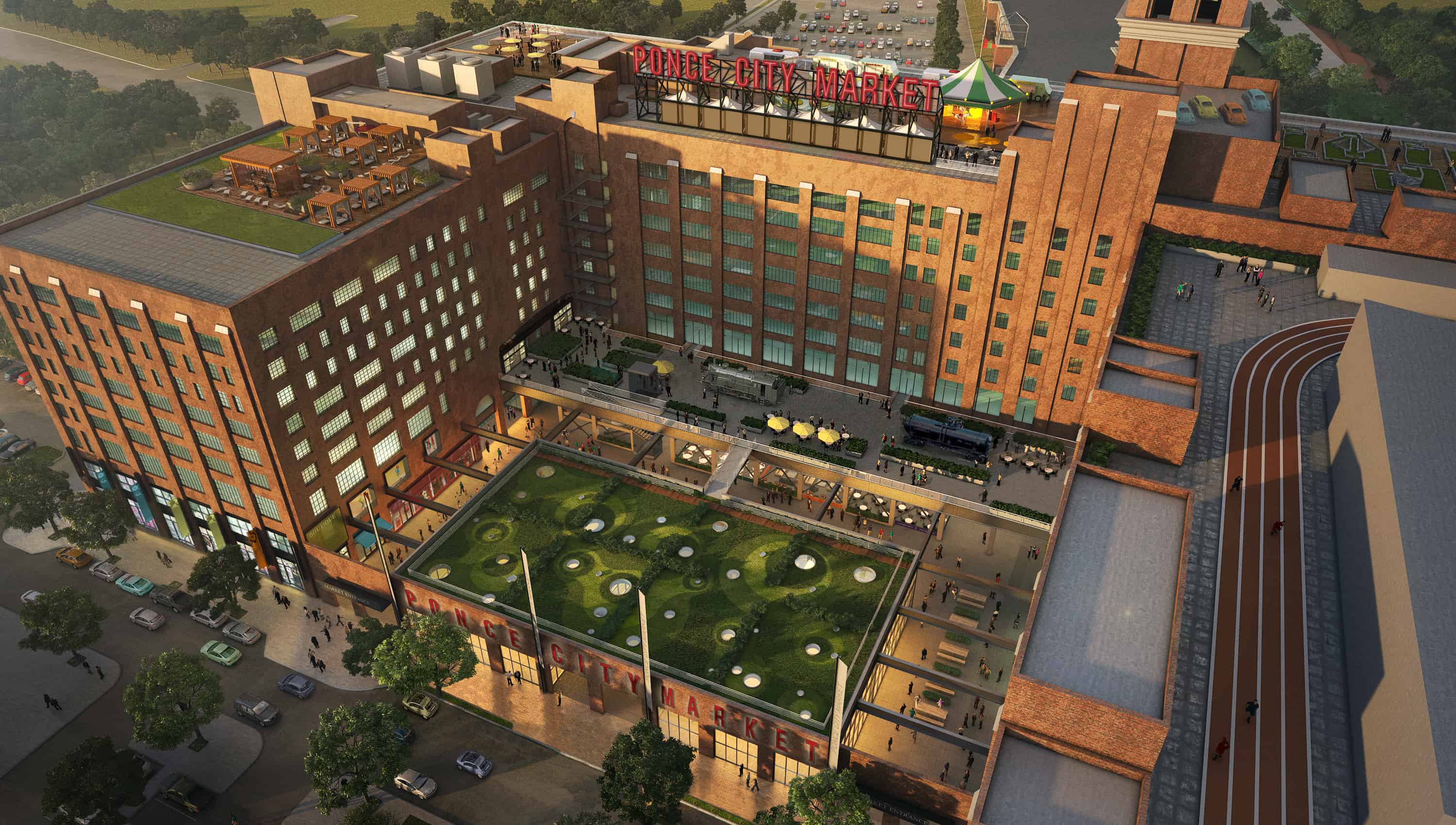 There is a lot of excitement about the construction and renovation happening at Ponce City Market, the former City Hall East building, which was also the former, historic Sears, Roebuck & Company building.

Slated to begin opening this fall with more stores and restaurants opening throughout 2015, the project has been some five years in the actual build-out. Total cost? A quarter billion dollars.

The site, which holds memories for many Atlantans of all ages, is ready to start a new phase of its contribution to the city’s neighborhoods it touches—the Old Fourth Ward, Virginia-Highland, Poncey-Highland and Midtown—as a breath of fresh air into a rapidly evolving section of the city. 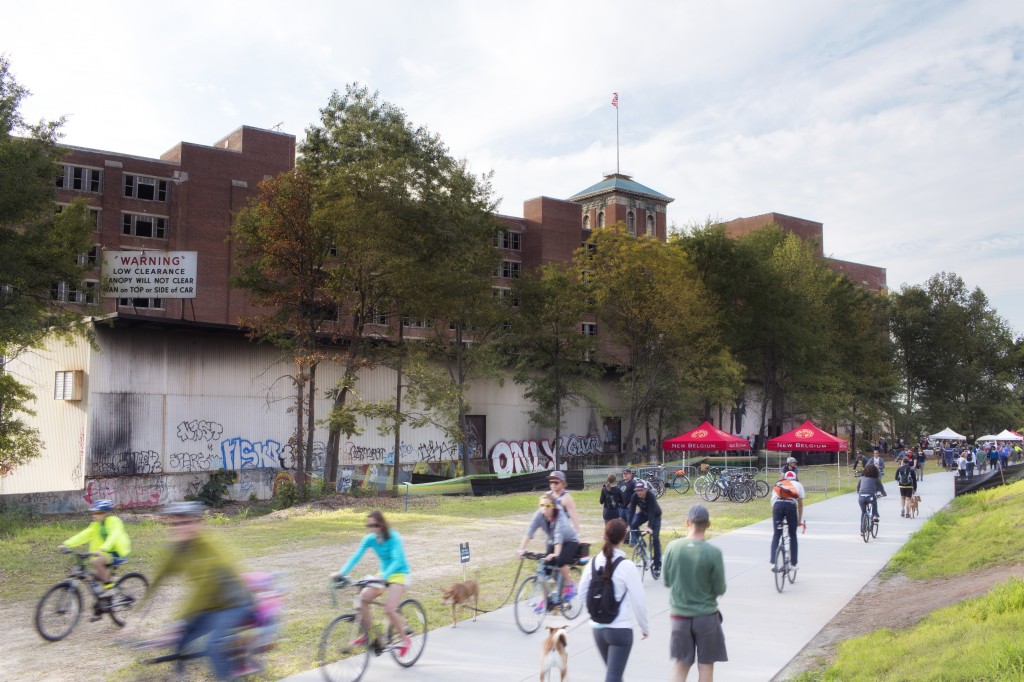 A partnership with the Atlanta Beltline was announced this month with plans to create a North Avenue Plaza for people to step off the Beltline to gather. Apartments, or flats as they are being called, are now being rented, art shows are taking place in the Ponce City Market art gallery and Dancing Goats, a coffee shop open in the space, is
packed nearly every day of the week. Jamestown, a real estate and private- equity group, bought the historic property from the city of Atlanta in 2011 for $27 million. 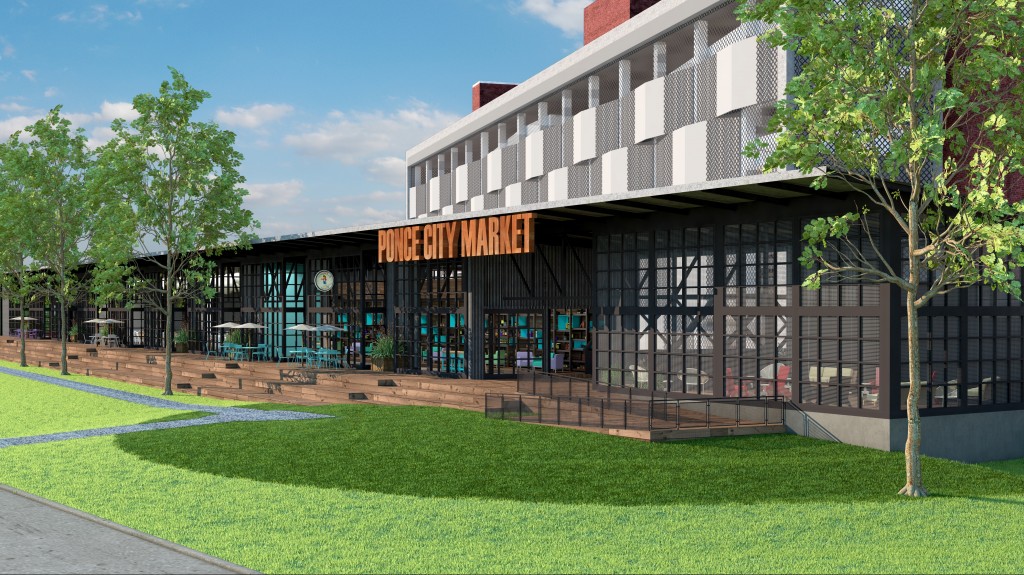 Jamestown is behind such well-known developments as the Chelsea Market in New York, Ghiradelli Square in San Francisco and the historic Warehouse Row in Chattanooga, Tennessee.  Ponce City Market will not only be a place for people to live but also for the public to gather at numerous planned restaurants and retail shops as well as around the Atlanta Beltline.

How much living space is there? What are the various sizes and costs?
259 residential flats now available for rent; there are studios, one, two and three bedrooms available starting at $1,295 (a month).

The Beltline Shed is being restored for retail and restaurant use as well. 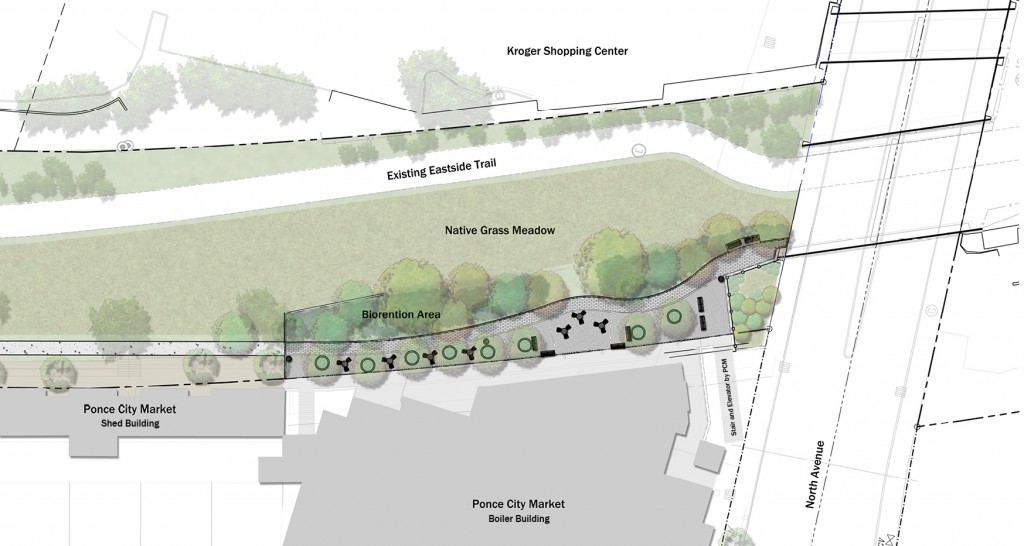 • From the June 12 Ponce City Market blog:
“We have a total of four buildings on the site and two of them front the Atlanta Beltline. The Shed and the Boiler Building. They will have re- tail and food … and with the new Boiler building we’re constructing and maintaining a stair and elevator access by the North Avenue Bridge.

“Also amazing is the public-private partnership between Atlanta BeltLine, Inc. and us (Jamestown) that resulted in a transportation, community and system preservation grant to build a public plaza with native trees and grasses, an ADA accessible path- way, benches, bike racks and trash cans. All for public use. In front of and designed in a coordinated effort to serve the needs of the Atlanta Beltline transit and trail corridor as well as the new Ponce City Market Shed and Boiler buildings retail fronting the trail.”

• From the June 12 Atlanta BeltLine blog: “Work is starting on the North Avenue
Plaza, a project resulting from a partnership between Jamestown (the developers of Ponce City Market) and the Atlanta Beltline.

“The Plaza, partially funded by a Federal Transportation, Community, and System Preservation grant, will function as a public space immediately adjacent to the Ponce City Market development, giving users of the Eastside Trail a place to step off the trail and gather. Ultimately, the plaza will be accessible from the bridge over North Avenue and from the existing access path to Ponce City Market’s rail shed deck. Ponce City Market will also construct stairs and an elevator from North Avenue as part of the construction of the Boiler Building, which they will make accessible to the public.

“In the coming days, Ponce City Market will begin the grading and site preparation work for the plaza and the Boiler Building.

“In finalizing the plans for this project, Ponce City Market and Atlanta BeltLine Inc. have coordinated closely with Trees Atlanta to address the trees that will be removed as part of this project replacement plan is in place. Once site preparation is complete, construction of the plaza should start this coming fall. The sustainable planting on the Plaza will also include a bioretention area and native grass meadow.”

How much has the project cost and when will it be completed?
We are slated to open in fall 2014 with a rolling opening into early 2015.
Office and residential move-ins will be- gin fall 2014 as well as the openings of Bind- ers and the Suzuki School.
Projected investment is a quarter of a billion dollars.

Is there going to be a Ferris wheel on the roof or some kind of small park? What will it consist of if so? Who will be able to use it?
There will be amusement and entertainment activities available and open to the public on the roof. More details to come. 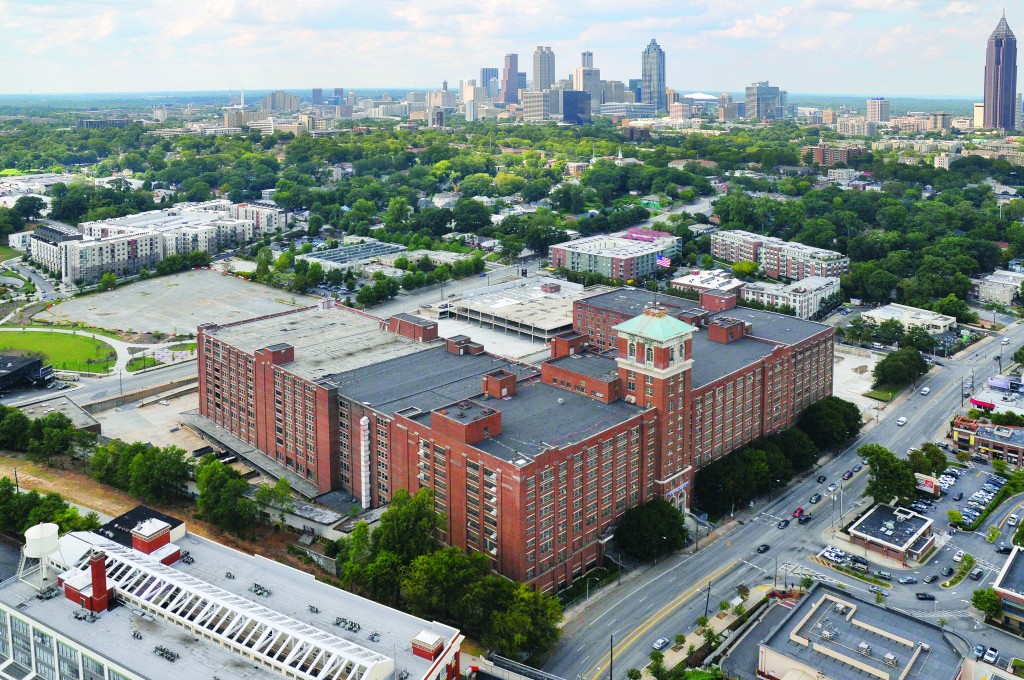 • Over 56,000 panes of glass were replaced in the restoration of the historic steel windows.

• There will be 400 bike parking spaces on property when it opens.

• 420 blue whales—that is how many it would take to equal the weight of materials the Ponce City Market crew has recycled since beginning construction in 2011. As of March 2014, 84,080,840 pounds of material has been diverted from landfill so far. 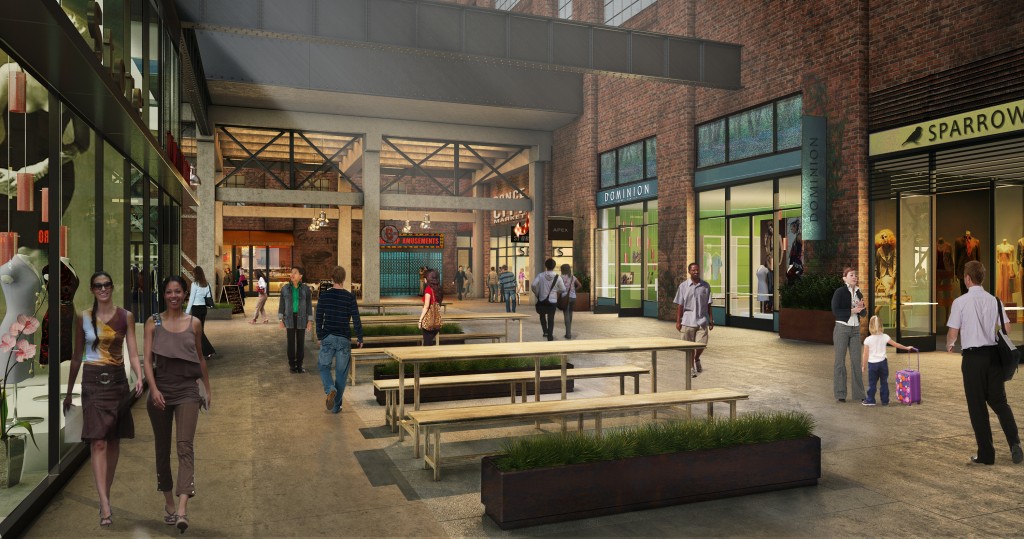 (Rendering of the courtyard inside Ponce City Market)

The more than 84 million pounds of recycled waste is also equal to:
• 4.2 Eiffel Towers 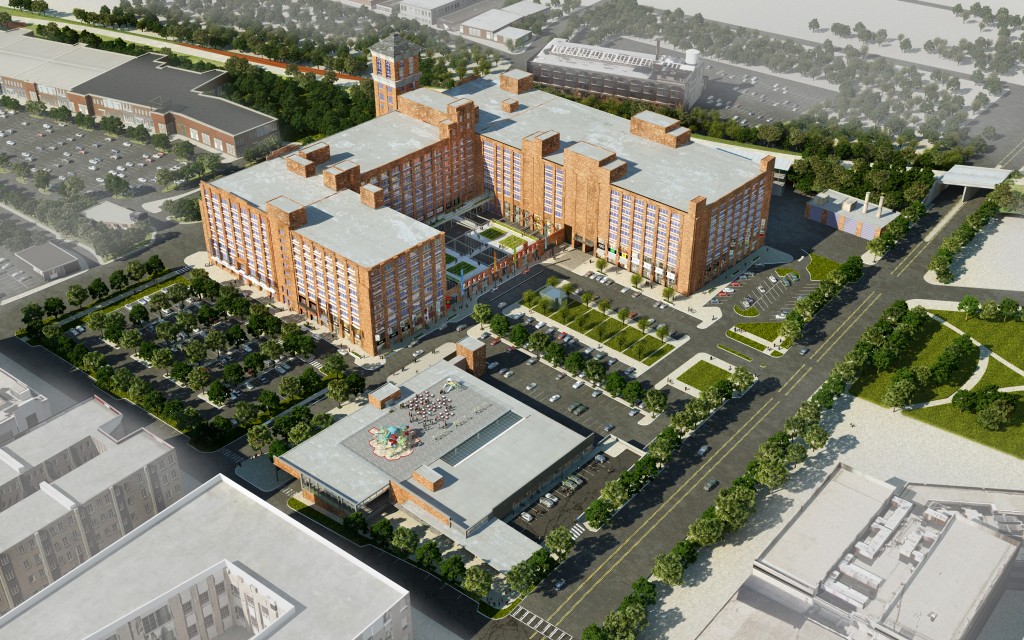