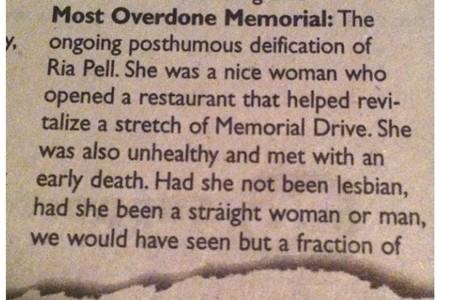 Ria Pell friends, loved ones call for boycott of Stomp and Stammer

A boycott against Stomp and Stammer newspaper over an editorial written by its editor criticizing the city’s reaction to Ria Pell’s death is gaining steam.

Jeff Clark, editor and publisher of the free monthly music newspaper that’s been around since 1996 and known for politically conservative ideals while writing about new bands on the scene, decided to take on Ria Pell’s mourners in the newspaper. The clip he wrote has been posted to numerous Facebook accounts as well as to Reddit.

His editorial has made many people angry and his remarks are also homophobic, some are saying.

Most Overdone Memorial: The ongoing posthumous deification of Ria Pell. She was a nice woman who opened a restaurant that helped revitalize a stretch of Memorial Drive. She was also unhealthy and met with an early death. Had she not been a lesbian, had she been a straight woman or man, we would not have seen but a fraction of the reaction. Instead, she was unrealistically elevated into something she wasn’t: a symbolic figure.

Late Wednesday, Pell friends angered by Clark’s comments started a Facebook page titled “Boycott Stomp and Stammer and all who advertise there” and stated on the open group page that, “The tasteless,nasty,disgusting,and hate filled article that Jeff Clark saw fit to write and publish will not be tolerated by the Atlanta Community!”

More than 700 people had joined the group as of late Wednesday and some advertisers, such as Park Pet Supply, are pulling their ads.

Clark is known as a controversial figure in Atlanta and in an interview with Creative Loafing in 2013, he said, “A lot of people are afraid of not being liked. For most of my adult life I’ve never had that fear.”