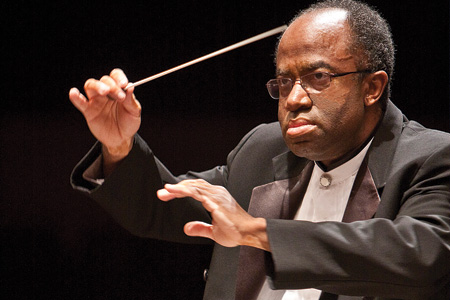 Michael Morgan does little to settle the eternal debate of whether prodigies are made or born. He largely attributes his success as an orchestra conductor to the nurturing he got from public school teachers, his parents and iconic conductor Leonard Bernstein.

Yet, from his earliest years, there were parts of Morgan’s nature that make it seem as if he were innately suited to be a maestro.

“[Conducting] is a part of the personality of whomever is doing it,” says Morgan, who is guest conducting the Atlanta Symphony Orchestra’s “Russian Stalwarts” concert March 28-30.

“It takes having some gift for physical expression,” Morgan adds. “We’ve all known conductors who were extremely musically knowledgeable, who knew everything you needed to know to conduct and orchestra, but who didn’t have the gift of physical communication. You have to have that ability to turn your ideas about a sound into a gesture.”

Morgan has had that gift since his debut concert, conducting the student orchestra at MacFarland Middle School in Washington D.C.

“I’ve been doing this since I was 12, and the physical part was pretty natural,” he says. “Sometimes that actually is a hindrance, because when you’re very, very young and things come too easily to you, you don’t work as hard as you might.”

Morgan’s natural gifts and hard work, along with the “nebulous” opportunities that build the career of any successful conductor, took him from the junior high school stage to leading symphonies in Chicago, Oakland and New York, where he conducted as part of an opening set for his musical mentor Bernstein, who was gay.

Morgan is also gay, and his sexual orientation might be considered another characteristic that makes his career seem predestined.

“Being a classical musician, being a conductor, being black, being gay — all of these things put you on the outside, and each one puts you a little further out than the last one,” he says. “So you get accustomed to constructing your own world because there are not a lot of clear paths to follow and not a lot of people that are just like you.

“Part of the reason there are so many more gay people in the performing arts than a lot of other places is because the need to be imaginative and to create your own universe, the arts are very conducive to that and other fields might not be as much so.”

The classical music industry itself often feels like a world apart from the real one, as Morgan remembers from his time studying under Bernstein.

“The straight conductors, they were more likely to keep their straightness a little quiet, so it was rather opposite the real world,” he jokes. “As a classical musician, you almost grow up in a bubble because there are always gay people around, at every level, everywhere: amongst your colleagues, and also in your audience, and amongst your patrons and donors. We’re always in the mix, which is why you don’t see any classical musicians having any big coming out because we’ve never been ‘in.’”

The larger society may be catching up with the symphony’s attitudes toward sexual orientation, but prejudices endure. Whenever Morgan has been solicited as a candidate to lead a city’s orchestra, he researches the politics of the area to see if hostile attitudes might prohibit him from fulfilling his calling.

“An orchestra being a non-profit has to raise money, and there’s just some places where it does not need – as the face that represents it – to be black or gay,” Morgan says. “Even though large parts of the arts community would be very accepting, large parts of the general community might not be as accepting, and you just can’t do anything that suppresses the organization’s ability to raise money.”

Morgan admires folks who are willing to take on such fights, but doesn’t consider himself much of a trailblazer, despite his unique success.

“I know enough about the history of both black and gay conductors that I don’t really think about myself as a pioneer,” Morgan says, citing as inspirations black maestros Dean Dixon and the recently deceased James DePriest and gay conductors Bernstein and Thomas Schippers.

Morgan’s achievements undoubtedly have a similar impact on budding musicians, and he is a vocal advocate of music education in public schools. He teaches in numerous capacities, and regularly speaks to students in cities where he is guest conductor, including Atlanta.

And although Morgan can have an evangelical passion about bringing new audiences to the orchestra, there is no panic within him to save his industry.

“You always want to look around and see who’s not in the room, and ask how do you get them there,” Morgan adds. “There are some cities where the arts are almost relegated to just a certain class of people, and then there are other cities where they are used deliberately to bring different people together.”

Top photo: ‘Being a classical musician, being a conductor, being black, being gay – all of these things put you on the outside, and each one puts you a little further out than the last one. So you get accustomed to constructing your own world because there are not a lot of clear paths to follow and not a lot of people that are just like you.’ — Michael Morgan (by Eric Politzer)