“To me, building coalitions is more than just being in a space. It means us being sincere in the work that we do. It means not just showing up … but truly engaging with one another,” she said. “If you show up and open up yourself to the possibility to being changed, you are on the breaking point of coalition building.”

There is also a major difference in how people are seen by others when it comes to building coalitions, Wholley said.

“We have to understand the difference between tokenized representation and intentional inclusion,” she said. “We have to determine what we want this revolution to look like for us. We can’t allow the narrative be determined for us … based on our collective truths and experiences.

“We are a community made up of groups with many variances, faces … we are descendants of royalty and we hold the blueprint of this nation’s history on our backs. We want to own our collective power,” she added.

Also speaking at the SBGA Summit was Keith Boykin, fresh from his work providing commentary on the Republican National Convention. 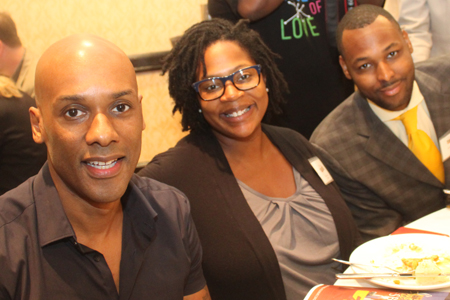 Boykin, who acknowledged he worked for many years on many losing Democratic campaigns before volunteering with Bill Clinton’s campaign that landed him a job in the White House, said it is important black people, including black LGBT people, get out to vote. Republicans, he said, are working in several states to inhibit marginalized communities from being able to even cast a ballot.

“People are saying, ‘I’m not sure this is an election I should be worried about’ because they believe President Obama will have no problem winning another four years.

“But this is not guaranteed,” Boykin said. “The polls are close [between Obama and GOP candidate Mitt Romney]. There is no  guarantee he’ll be the president again — but he will if we turn out to vote. Even Georgia is a state Obama could even win if African Americans turned out.”

He closed his remarks with a paraphrase of a famous Dr. Martin Luther King Jr. quote: “If you can’t fly, run. If you can’t run, walk. If you  can’t walk, crawl. But by all means, keep moving. Keep moving.

Second photo: SBGA speaker Keith Boykin (left) enjoyed the luncheon that is part of the summit each year with other participants. (Photos by Dyana Bagby)