Rainbow flags were raised, the gayest t-shirts we have were worn, bull horns were used to lead in chants of “DOMA is dead!” and the constant buzz of joyful noise and excitement was breathtaking. Speeches were given to commemorate the historic day and promises were made to continue to work for marriage equality in Georgia. And it was beautiful.

Here’s what several people attending the rally had to say: 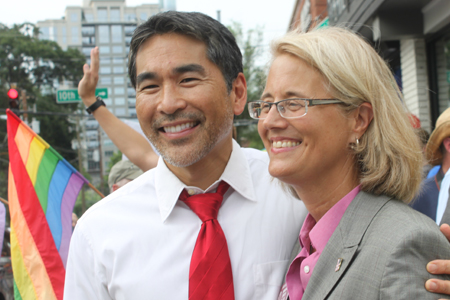 State Rep. Karla Drenner, (D-Avondale Estates), the state’s first openly gay state legislator, said she cried when she heard the news at her home
I stayed up most of the night thinking about which way this could go. In the morning I turned my computer on. I called Jeff [Graham]. We were both very nervous. Then, when the decision was announced, I went downstairs. I was still in my pajamas. I started watching the news. I thought, ‘It happened.’ I’m speechless to believe this happened in my lifetime.

Ideally I would like us to is repeal the marriage amendment [approved by some 80 percent of voters in 2004]. I think beginning the discussion is important. I think every time we get to tell our stories, every time we get to be who we are, we move further along in our quest for equality. I’ll never understand why people think that they cant have their God and we cant have our equality and live in the same world

Alex Wan, only openly gay Atlanta City Council member, rushed out of a Zoning Committee meeting after it finished to get in front of his computer.

I was sitting in my office at City Hall watching the [SCOTUS] blog and I found myself strangely very emotional. When I saw that first post I was nauseous and excited and just anxious and hopeful. I was just excited for the community but still recognize we have a lot of work to do in Georgia.

I got involved with the political process in 2004. This is something very personal to me. Joe [Bechley] and I have been together 8 years now. I don’t know if I ever thought this might be an option. [The ruling] made me realize that another part of me — that this could result in some personal fulfillment is an option again. Just sharing in that joy is overwhelming.

I know that being out and proud and incremental gains we’ve made [have been important], then to have this big sudden flood is great. We think about milestones in history and June 26, 2013, will go down as an important day. 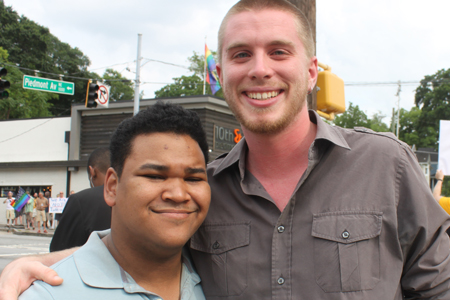 Noah Maier, 22, recent graduate of Mercer University and now working as a Democratic fundraising consultant in Atlanta, was at the rally with his boyfriend, Kayden Williams, 22, a sociology and finance major at Georgia State University.

Noah: [Wednesday morning] was the most exciting moment for me and it felt weird to be sitting in room staring at a computer screen. When the announcement finally came across I just started crying. It’s unbelievable, it’s historical. Just to come from hardships we’ve been through …

Kayden: I think that I’m still in shock. I come from a very religious background. My parents are Jehovah’s Witnesses. To come from being kicked out and moving out at 16 to this moment being in Atlanta, I don’t  … [his voice cracks with emotion and he begins to cry and Noah also begins to cry] … even know how to describe it. Family has always been so important to me and marriage has always been so important to me and I know there are probably other issues we should be fighting harder for, but at end of day for someone to recognize my love for someone else and say that’s perfectly valid, that’s more important than anything else at this moment. 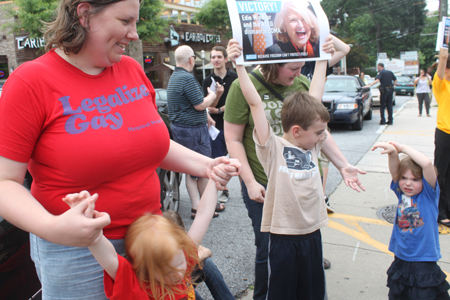 Kash Ashley, 32, of Acworth, was there with her three children

I remember being in high school when DOMA passed and my best friend and I talking about it. I never thought we would have to wait 17 years to see it die. [I] wanted to make sure the kids came down too. I have one who identifies as gay. He’s eight. I’ve had to tell him about Chick-fil-A and Boy Scouts and so finally it’s nice to have something positive. It’s hard to explain to your 7- or 8-year-old that people don’t like you because of who  you are. 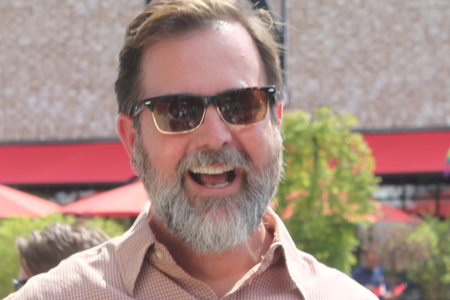 It is really the Supreme Court moving the entire issue of marriage equality forward in a very dramatic way. We of course still have a lot of work to do in Georgia but it will just get easier from this point forward. Clearly we know that history and justice are on our side.

I think it’s really important to take a few day to soak in the celebration because our victories are so few and far between and take stock in how far we’ve come in such a short amount of time. It was just nine years ago … that it looked like that the entire world was against us. We now have 3/4 of this country who believe this [marriage equality] is inevitable.

We know what we have to do immediately is educate our straight allies that we are not defining marriage. We just want to be recognized like everyone else. This is very, very personal and it’s about protecting the people we love.

The downside of [Wednesday] is it’s not going to be an automatic [acceptance] of our rights in Georgia even if people are legally married in another state. I was not expecting any Republican leaders to embrace this. But I know from our polling around workplace discrimination that we have the support of 90 percent of voters under age 39. All political leaders are going to have to pay attention to LGBT issues regardless of what their party is, regardless of where they reside within the state, because the generation coming into power in the next few years is very, very different than the generation that had power 10 years ago when they took our rights away. 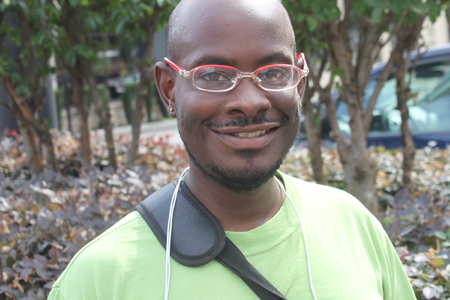 I think Georgia should be next. We need to recognize we are here too and we are part of America and we have just as much rights as anybody on earth — and that’s how I see it. 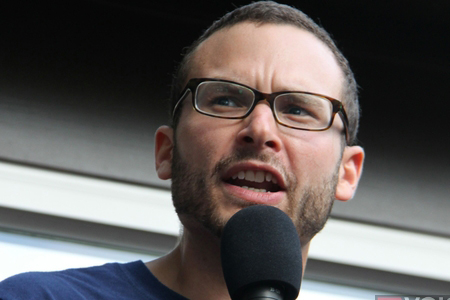 Anthony Kreis, political co-chair for HRC’s Atlanta Steering Committee is this year’s recipient of the Allen Thornell Political Achievement Award from Georgia Equality. (Read more about Saturday’s Evening Equality and about the honorees by clicking here.)

For Georgia, the DOMA downfall could actually mean tangible benefits for Georgians who are legally married elsewhere. As far as Georgia’s constitutional ban, the [ruling] didn’t end that, but really marks the death knell of it. The tide of equality will not leave Georgia behind for much longer. Many are quick to assume Georgia can’t come around. But I’ve befriended a lot of conservative Republicans. They are evolving. The shift is coming, times are changing.

Check out more photos from the Day of Decision rally here and here.

Due to technical difficulties when uploading the videos to YouTube, there is a significant delay and the speaking does not match up with the actions. But the words are so powerful, so take a listen.

Especially fun is Nevins “praising” Justice Antonin Scalia’s ability to predict the future so well. Ten years ago when sodomy laws across the nation were struck down in Lawrence v Texas, Scalia wrote in his angry dissent that the next logical step would be same-sex marriage. In his very angry dissent in the DOMA ruling, Scalia states the next logical step is for all states to finally have marriage equality.