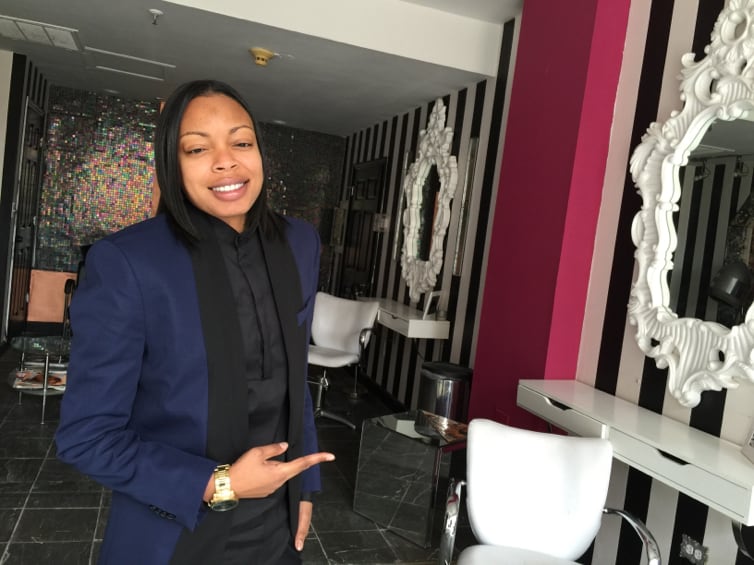 It’s hard to imagine that Mychel “Snoop” Dillard is capable of getting the recommended eight hours of nightly sleep with her schedule. The busy Atlanta lesbian entrepreneur is the brain behind two successful businesses: The Hookah Hideaway, a popular downtown hookah bar, and Party Bus Kings. And as if those weren’t enough to keep her busy, Dillard is weeks away from opening Posh Ultra Lounge, a new upscale lounge in Macon, and Girl Talk, a dating app designed specifically for women who love women.

Georgia Voice managed to catch up with the Vanderbilt University alumna in between making final preparations for the grand opening of Posh Ultra Lounge and ongoing talks for Escobar, a joint nightclub venture with Atlanta rapper 2 Chainz that is sure to make waves in 2016.

Georgia Voice: How did the collaboration with 2 Chainz come about?

Mychel “Snoop” Dillard: I was looking to expand and I always wanted to be on Peters Street. The current venue I have is called the Hookah Hideaway (at 43 Jesse Hill Jr. Drive NE). It’s a very intimate spot. I wanted to expand because we’ve really outgrown it due to its popularity. My realtor initially introduced us and then 2 Chainz and I got together to see if we would be a good fit and we found that we were and formed a relationship. The rest is history.

Have you faced any resistance as a lesbian woman in a heavily male-dominated industry?

Surprisingly, I haven’t faced any resistance at all. I get a lot of respect in our community and the straight community as well. I think people just look at me as a businesswoman who happens to be gay. I think being in a city like Atlanta definitely helps.

Where did the idea for the party bus come from?

When I was trying different hustles to figure out what I was going to do next, one of the ideas was to promote parties for party buses. I was going to rent the party bus from someone else who had one and the woman I was seeing at the time suggested I take it a step further and get my own bus. Party Bus Kings has been in business since 2012.

What type of customer usually rents a party bus?

Any and everybody. We do tailgates, we do kids birthdays, sweet 16s, retirement parties. We’ve had babies on the bus who were just picked up from the hospital. It’s a wide variety. People use them a lot for holidays. Even if you have friends coming into town and you don’t want to drive.

Tell us about your new app Girl Talk.

I have a lot of friends that are gay males who use Grindr and I thought it was so messed up that I didn’t have an app to get on to find me somebody (laughing). Even though I’m in the nightlife industry, I don’t really enjoy going to clubs and parties. I always thought it would be cool to come up with an app for women to connect with women all over the world. It will embody Instagram, Snapchat and Facebook all in one. There will be a section to chat, send messages, and create profiles. You’ll be able to upload videos and create forums. It’ll also have a GPS feature. I think it’s going to be phenomenal! It’ll start out as a free app when it launches in late November and will most likely be $1.99 to download by the end of January.

There’s a quote on your website that says, “Overcoming obstacles is the best tool for success.” There are a lot of people who’d like to start a business but they’re gripped by fear. How did you overcome your fears?

I never really had a lot of fear. I was always a risk-taker. One of the things I tell people is that if you don’t take that risk you’ll never have the opportunity to see if you can do it. And a part of success is failure. We learn a lot from our failures. When you do overcome those failures it makes you a much better leader and businessperson because you realize that you can get through difficult things.