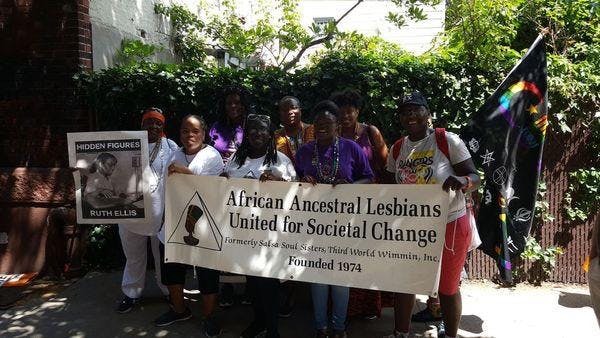 Atlanta is home to many things, including a large community of black LGBTQ women. But when it comes to consistent outlets for those women to network and build bridges outside of a nightclub atmosphere, many say the options are limited. It’s something New Jersey transplant Lakisha Goss said she noticed immediately.

“There was a lot of parties to go to, but there wasn’t anything where there was community building or networking,” said Goss, who channeled her frustration into forming a local chapter of African Ancestral Lesbians United for Societal Change, a New York-based group with branches across the country.

The social group, a mouthful that members call “Aloosh” for short, is known around the country for hosting monthly talks on topics like black lesbian identity, mental health and parenting while gay, drawing a small but committed following in the process. The Atlanta chapter began the first of its talks in February.

Organizers hope bringing it to Atlanta — arguably the hub of black LGBTQ life in America — will create a safe space for women while helping revive a group that’s provided a surrogate family for black LGBTQ women across the country for decades. The chapter is still finding its footing in Atlanta, building buzz on social media and on a recent weeknight, hosting a combination wine tasting and vision board party.

About a dozen women weathered the driving rain and low temperatures for the Brookhaven event last month. Decked in casual sweaters and work dresses, the largely 30-something group giggled their way through woodsy red blends, before brainstorming on the life goals they wanted to reflect on their vision boards. Goss believes attendance will grow as more women look for ways to connect.

“Many people also don’t know that there’s more to this life than the club,” Goss said. AALUSC’s history stretches back to 1974, an era when homophobic sentiment ran strong and being an out lesbian — let alone a lesbian of color — was risky. It often meant being abandoned by one’s own relatives, the impetus for the group’s founding. “People were being cut off from their families,” Goss said. “Many times they needed shelter, they needed meals, they needed just a sense of family.”

Salsa Soul Sisters formed in New York City to create a surrogate family for women. The group eventually split into two factions – the Latina-centric Buenas Amigas, and AALUSC, according to Wikipedia. Over the years, the collective hosted workshops and seminars, created a babysitting cooperative and even published quarterly magazines and a newsletter, according to the site. But by 2015, the landscape had changed. For one, the original founding members were aging and dying, Goss explained. At the same time, the virulent homophobia that led to the group’s creation was largely a vestige of the past. “They were going to disband,” Goss said. “But then some of the younger members said no, we still need this. It may not be in the same capacity as before, but it’s still needed.”

At the time, Goss was living in New Jersey and was active with the storied group. When she relocated to Atlanta last May however, she was surprised that nothing united local lesbians of color in a similar way. “I felt like I didn’t know what was going on where to even find the community,” said Goss, who began asking women on Facebook what they felt was missing from the scene. “The common thing that everyone said was unity.”

The Atlanta chapter’s 2019 events are still shaping up, but so far, Goss and her six-person board plan have planned discussion brunches, volunteer events, and even a Meetup group. While themes will vary, the general idea is to broaden black LGBTQ offerings. “Groups focus more on the club scene activities and we want to focus more on your right to vote, LGBT rights in Georgia, having monthly discussions about Christianity – just open up the doors,” said board co-chair Lisa Harris.

The group will also partner with other organizations, including LGBTQ sororities. Creating solidarity among black women, she explained, is a critical focus for 2019. “Everybody else has their voice,” she said. “We need our own for black women because we’re all we’ve got.”