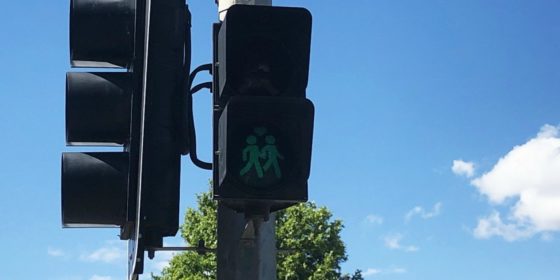 Australia’s capital city, Canberra, put up same-sex crosswalk signals as a celebration of the one-year anniversary of the Australian legalization of same-sex marriage.

Eight new lights were installed in the Braddon suburb, featuring both male and female same-sex couples. Braddon has the largest LGBTQ population in Australia.

“The first location was selected because Braddon has distinctively been the place of celebration for Canberra’s LGBTIQ community,” said Malcolm Snow, the CEO of the City Renewal Authority. “A year ago, we saw this area filled with people, color, and joy after the country voted overwhelmingly in favor of marriage equality.”

Canberra is a largely pro-LGBTQ city. Almost 75 percent of Canberrans voted yes to legalizing same-sex marriage – the largest support in the country. Canberra was also recognized as Australia’s gay capital in the 2016 census because of its proportion of same-sex couples.

Although Canberra is the first city to institute these same-sex crossing signals, other cities have installed rainbow crosswalks to celebrate LGBTQ pride. Atlanta’s rainbow crosswalk, located at the intersection of Piedmont Avenue and 10th Street, is joined by crosswalks in Denver, Phoenix, and Orlando, among others.

Orlando’s crosswalk was installed as part of a memorial to the victims of the Pulse nightclub shooting and is located across from the gay club’s former site.

Calgary, Canada also recently installed a transgender pride crosswalk along with a rainbow one.