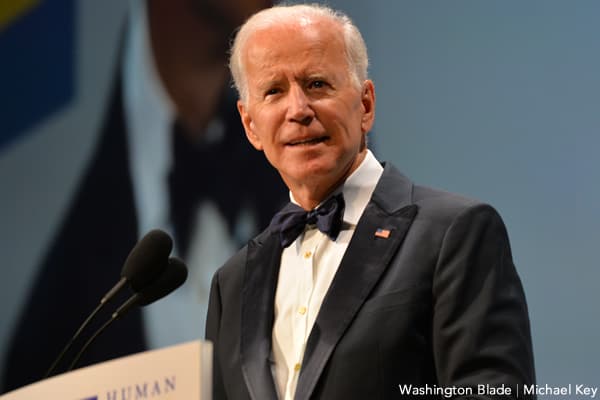 Former Vice President Joe Biden’s announcement that he is running for president has sparked a mixed reaction among activists and LGBT Democrats.

“From his support for inclusive hate crimes protections in the U.S. Senate to his leadership on marriage equality as vice president, Joe Biden has been a vocal champion of equality,” Sarah McBride, a transgender woman from Delaware who is a spokesperson for the Human Rights Campaign, told the Washington Blade on Tuesday.

McBride, who in 2016 became the first openly trans person to speak at a major U.S. party convention when she spoke at the Democratic National Convention in Philadelphia, noted Biden “placed LGBTQ equality at the center” of the Biden Foundation that he and his wife, Dr. Jill Biden, created after he left office. McBride also said Biden was “consistently using his unique platform to speak out on international LGBTQ rights, family acceptance and transgender equality.”

“Biden joins a field of trailblazers and pro-equality champions seeking the Democratic nomination who are exciting LGBTQ voters around the country,” McBride told the Blade.

Biden on June 16, 2016, traveled to Orlando, Fla., with Obama after the Pulse nightclub massacre and met with victims’ families. Biden less than four months later described LGBT rights as “the civil rights issue of our time” during a speech at the U.N. in New York.

“Discrimination against anyone for their sexual orientation and gender is anathema to most basic values,” said Biden.

Biden in 2017 condemned the anti-LGBT crackdown in Chechnya.

The Biden Foundation, which suspended its operations after Biden officially entered the race on April 25, in August 2018 launched a campaign that sought to promote acceptance of LGBT youth among their families and communities. The Bidens a few weeks later spoke at HRC’s annual national dinner in D.C.

“I’ll always be thankful that Vice President Biden forced Obama’s hand on supporting marriage equality before the 2012 election,” said Ryan Davis, a marketing executive who lives in Brooklyn, N.Y. “Without Biden and Obama’s support, it’s unlikely we’d have won all four of the states that had marriage equality on the ballot in 2012.”

Former U.S. Ambassador to the Dominican Republic James “Wally” Brewster and his husband, Bob Satawake, have also said they will support Biden.

“The vice president had my back personally and I have sat beside him with other leaders around the world,” wrote Brewster on his Facebook page after Biden declared his candidacy. “I have watched him defend those who don’t have a voice. I have also seen him be tough when needed.”

Biden has declined numerous interview requests the Blade has made in the past. He also did not specifically refer to LGBT rights in his campaign announcement.

Biden evoked the 2017 white nationalist rally in Charlottesville, Va., that left Heather Heyer dead and prompted President Trump to “condemn in the strongest possible terms this egregious display of hatred, bigotry and violence on many sides.” Biden at the HRC dinner said he “could not remain silent” over the issue.

“We are in a fight for America’s soul and we have leaders … who at the time when that occurred, when these guys were accompanied by white supremacists and Ku Klux Klan and those who objected, making a comparison, saying, ‘There are good people in both groups,’” he said. “What has become of us? Our children are listening and our silence is complicity.”

Biden entered the race amid questions over his previous interactions with women.

The former vice president in 1991 was chair of the Senate Judiciary Committee when it held a hearing on Anita Hill’s allegations that now U.S. Supreme Court Justice Clarence Thomas subjected her to sexual harassment.

Biden on Monday told ABC’s Robin Roberts that Hill was “not treated well.” The New York Times reported Hill felt “deeply unsatisfied” after she spoke with Biden before he declared his candidacy.

“I still haven’t forgotten or forgiven Joe Biden’s treatment of Anita Hill,” Monica Roberts, a trans activist of color and blogger in Houston, told the Blade on Wednesday. “It will affect his campaign for the 2020 Democratic nomination.”

Roberts, who said she likes U.S. Sen. Kamala Harris (D-Calif.), added she wants “a younger Democrat in that chair.”

“We have plenty to choose from in this presidential election cycle,” Roberts told the Blade.

Rev. Merrick Moise, a trans man of color and activist in Baltimore, said Biden “reminds me of the working-class men in my life as a kid in Queens.”

“Yes, they could be bawdy or crude, but they really have hearts of gold,” Moise told the Blade.

“He needs to tell sexual and gender minorities what he will not only do for us, but how he will partner with us to move progressive policy forward and encourage the country to recognize our rights to live as free and equal citizens,” he added.

“Truthfully, he might be the strongest candidate to beat the current occupant of the White House,” Moise told the Blade. “Time will tell.”

Earl Fowlkes, chair of the DNC’s LGBT Caucus and a former president of the Gertrude Stein Democratic Club, agreed.

“Joe Biden is a formidable candidate for the Democratic nomination for president,” he told the Blade on Wednesday. “His commitment to LGBTQ rights is without question and he has a long record of supporting issues that are important to women and communities of color.”

“His entry into the nomination process will make the Democratic primary even more interesting than it already is,” added Fowlkes.

The Blade has reached out to Biden’s campaign for comment for this story.