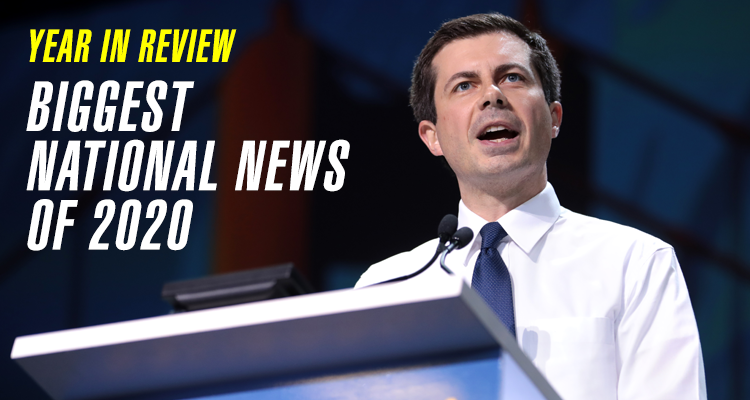 2020 was historic for the entire country, particularly LGBTQ Americans. Along with the coronavirus pandemic and Black Lives Matter movement, 2020 was the deadliest year on record for transgender people, LGBTQ employment discrimination was blocked by the Supreme Court, and Donald Trump’s presidency came to an end. Think back on the most significant year of late with us as we recount some of the biggest national news stories of 2020.

Leaders from the United Methodist Church announced that the denomination would split because of “fundamental differences” over same-sex marriage.

The separation came after a controversial vote to uphold the church’s “Traditional Plan” to oppose homosexuality in February 2019, for which 53 percent of church leaders voted.

After the split, “all administrative or judicial processes addressing restrictions in the Book of Discipline related to self-avowed practicing homosexual or same-sex weddings” were temporarily suspended.

After an historic campaign, Pete Buttigieg suspended his bid for the Democratic presidential nomination. Buttigieg made the announcement in South Bend, Indiana, the city he served as mayor before running for president.

To his crowd of supporters in South Bend, Buttigieg reflected on his campaign, saying he was proof America was changing.

“It proved that Americans really are hungry for a new kind of politics rooted in the values that we share in cities and suburbs and rural communities, in crowds that spilled out of venues from Salt Lake City to Raleigh to Arlington,” he said. “We saw Americans ready to meet a new era of challenge with a new generation of leadership.”

“We sent a message to every kid out there wondering if whatever marks them out as different means they are somehow destined to be ‘less than,’” Buttigieg continued, “…that someone who once felt that exact same way can become a leading presidential candidate with his husband by his side.”

Buttigieg’s decision came after he took home a fourth-place finish in the South Carolina primary February 29, following behind winner Joe Biden (48.4 percent), Bernie Sanders (19.9 percent) and Tom Steyer
(11.3 percent), who also suspended his campaign, with 8.2 percent of the votes.

The landmark ruling extended discrimination protections to millions of works nationwide by contending that Title VII of the Civil Rights Act, which bars discrimination based on sex, includes gender identity and sexual orientation.

“An employer who fires an individual for being homosexual or transgender fires that person for traits or actions it would not have questioned in members of a different sex,” Justice Neil Gorsuch wrote in the 6-3 decision. “Sex plays a necessary and undistinguishable role in the decision, exactly what Title VII forbids … [A]n employer who discriminates on these grounds inescapably intends to rely on sex in its decision-making.”

The decision encompassed three cases the Court heard together — Bostock v. Clayton County, Georgia, Altitude Express Inc. v. Zarda, and R.G. & G.R. Harris Funeral Homes Inc. v. Equal Employment Opportunity Commission. In the former two lawsuits, gay men sued after being fired for their sexual orientation. In the third case, Aimee Stephens, who passed away this May, was fired after informing her employer that she is a transgender woman.

“The court’s decision today makes clear what we have said all along — people should not be fired from their jobs simply because they are gay or transgender,” said Jeff Graham, the executive director of Georgia Equality. “But today’s win is one step in the right direction of outlawing all forms of discrimination against marginalized communities. This decision should only fuel our urgency to see Georgia pass discrimination protections for all Georgians.”

After only eight months, the number of trans people killed this year surpassed the number for all of 2019.

In the U.S. last year, 26 trans, nonbinary, and gender non-conforming people were known to be murdered. By August, at least 28 transgender people had been murdered so far. Now, that number has reached at least 41, solidifying 2020 as the deadliest year for transgender people on record.

“Transgender people — and particularly Black and Latina transgender women — are marginalized, stigmatized, and criminalized in our country,” said Rodrigo Heng-Lehtinen, the deputy executive director for NCTE. “They face violence every day, and they fear turning to the police for help.”

To combat this epidemic of violence, the National Center for Transgender Equality, suggests access to safe and affordable housing be increased and policies that protect transgender people from discrimination and increase economic opportunity be introduced.

U.S. Supreme Court Justice Ruth Bader Ginsburg, the justice with the most pro-LGBTQ voting record in the history of the court, died following a long struggle with cancer.

According to numerous news reports, Justice Ginsburg dictated a statement to her granddaughter, Clara Spera, just a few days before her death. The statement said: “My most fervent wish is that I will not be replaced until a new president is installed.”

But U.S. Senate Majority Leader Mitch McConnell, who denied President Obama a hearing on his nominee to replace Justice Antonin Scalia when Scalia died nine months before the 2016 presidential election, issued a statement Friday evening saying, “President Trump’s nominee will receive a vote on the floor of the United States Senate.”

The U.S. Senate confirmed Amy Coney Barrett to a seat on the U.S. Supreme Court by a vote of 52-48, solidifying a 6-3 conservative majority on the bench and President Trump’s lasting impact on the judiciary.

No Democrat voted in favor of confirming Barrett, whom President Trump selected to replace the late Ruth Bader Ginsburg on the Supreme Court.

Sarah Kate Ellis, president of the LGBTQ media watchdog GLAAD, said in a statement Monday prior to Barrett’s confirmation the appointment “is alarming for LGBTQ people and for all Americans whose fundamental rights should never be up for debate.”

”Barrett’s time at a school that discriminated against LGBTQ families and hurt LGBTQ youth is disturbing and should disqualify her from the Court. Her stated views against marriage equality, rulings against access to abortion, and her public criticism of the Affordable Care Act are out of step with fair-minded Americans and threaten the progress our country has made to become a stronger and more equitable home for all,” Ellis said. “Her record against LGBTQ families and rights has no place in American life, let alone the highest court in the land.”

After days of thorough ballot counting, former Vice President Joe Biden emerged as the victor of the 2020 presidential election on Saturday, ousting President Trump from the White House as a one-term president.

The Associated Press called Pennsylvania, which has 20 electoral votes, in favor of Biden, giving him 284 votes in the Electoral College, surpassing the 270 threshold needed for him to win the presidency.

Alphonso David, president of the Human Rights Campaign, said in a statement the victory by Biden and Harris “proves once again that equality is a winning issue.”

“The Biden/Harris ticket is the most pro-equality ticket in history. President-elect Biden and Vice President-elect Harris are not just willing to be our allies, but they are true advocates for equality,” David said. “And they’ve done it for decades.”

“From Biden’s work championing hate crimes protections in the 1980s to Harris performing some of the first marriages for LGBTQ couples after Prop 8 was overturned, these leaders have a clear vision that centers unity over division,” David said, “A vision where LGBTQ people are protected from discrimination and are afforded the freedoms and rights we should all have. A vision where transgender and gender non-conforming people don’t fear for their lives walking down the street. A vision where LGBTQ children are loved, embraced and protected from bullying.”

Following news of Biden’s win, Trump in a statement refused to concede and said he’d fight the election results in court.

“We all know why Joe Biden is rushing to falsely pose as the winner, and why his media allies are trying so hard to help him: They don’t want the truth to be exposed,” Trump said. “The simple fact is this election is far from over. Joe Biden has not been certified as the winner of any states, let alone any of the highly contested states headed for mandatory recounts, or states where our campaign has valid and legitimate legal challenges that could determine the ultimate victor.”