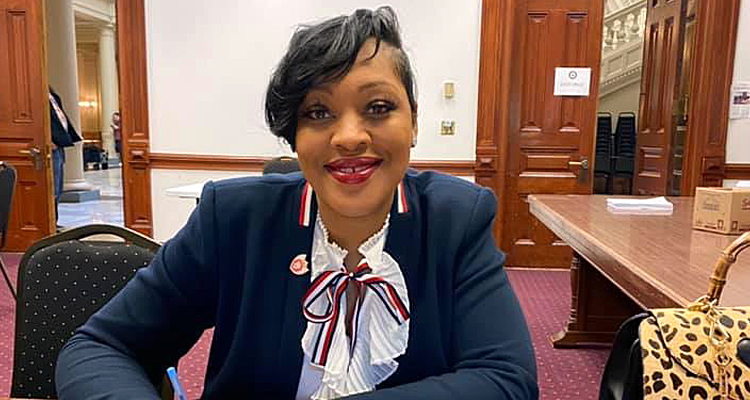 Angela Stanton-King announced earlier this month that she is running as a Republican to unseat incumbent Rep. John Lewis, who represents Georgia’s fifth Congressional district in the U.S. House of Representatives. Stanton-King in recent posts has taken to Twitter to voice her opinions.

NBC News reported that one tweet said, “Gay means Men having sex with men. If you wouldn’t want your 12 yr old daughter advertising that she enjoys sex with men/boys why your 12 yr old son?,” Stanton-King wrote in one tweet, alongside a picture of Zaya, former NBA star Dwyane Wade’s transgender daughter. “This is confusion, pedophilia, and sexual exploitation wrapped up in acceptance.”

Tweets from the weekend of March 7 were deleted, and she issued an apology in a series of three tweets. She apologized for the way some posts may have offended the LGBTQ community. She said her concern is protecting children.

“I will reconsider my delivery in how I address this issue,” she wrote on March 13. “And I will be mindful to consider the feelings of others moving forward, and I hope you will forgive me.”

Other posts include a tweet from Feb. 28 in which she shared a video of a child watching a drag queen perform.

“When you see Pedophilia being normalized under the guise of #LGBTQ call it out!! If this was a female stripper she would be arrested. But because it’s a man dressed as a woman it’s all good #POLITICS,” Stanton-King wrote.

Her views of the LGBTQ community also go back to 2012.

Stanton-King said the tweets come from concerns of protecting children and their innocence.

“Our children’s innocence is being stolen, and we have to do something about it. There is a war going on for the hearts and minds of Georgia’s children, and we have to stand up against the sexualization of our culture and of our schools,” she said in an email.

“The early introduction of sex, the perversion of sexuality, and the rampant evil of sexual abuse have had devastating effects on the identity and development of our young people,” she added.

Eric Paulk, deputy director of Georgia Equality, said that her comments aren’t reflective of the Congressional district and are ill-informed.

“While Georgia Equality does not endorse in federal races, the fact remains that Ms. King-Stanton’s views are not reflective of the diversity of District 5 and are not in line with how Georgians perceive LGBTQ communities,” he said.

“Three-fourths of Georgians believe that LGBTQ communities should be protected against discrimination, suggesting that folks like Ms King-Stanton are fringe extremists whose views neither represent District 5 nor the majority of Georgians,” Paulk added.