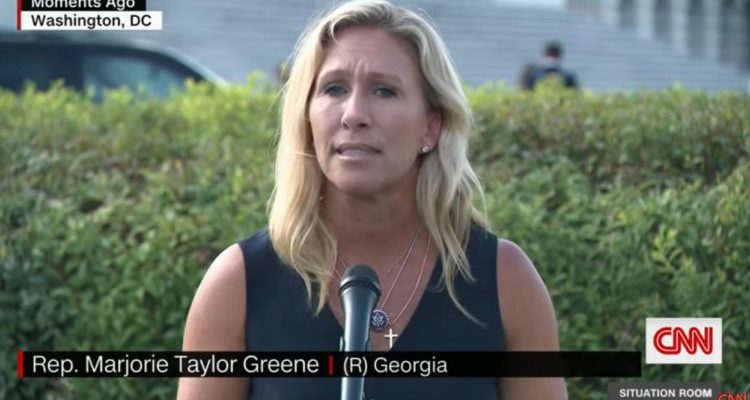 In a retweet Tuesday afternoon of  Liz Joy, a fellow Republican who is challenging Democratic U.S. Representative Paul Tonko in New York State’s 20th Congressional District in the 2022 election, Greene launched into a hateful transphobic rant claiming, “This is CHILD ABUSE!!!!! This baby is in danger! Remove this child immediately. Caring for and raising children should have nothing, absolutely NOTHING, to do with fulfilling this man’s unnatural fantasies. Men can NOT give birth or breast feed. They are mentally unstable.”

What set Greene off was a June episode from Season 3 of 9 Months With Courteney Cox, which featured trans couple Ahanu and Petrona. Ahanu is transmasculine and carried the child, and Petrona is a trans woman. In the episode Petrona was attempting to breastfeed the baby and being frustrated when she could not; the child is being fed with formula.

The Advocate’s Trudy Ring pointed out that trans women are sometimes capable of breastfeeding through use of hormones or other medications to induce lactation. A recent study noted successful induced lactation in a trans woman.

Greene has an established record of anti-LGBTQ rhetoric and transphobia. Earlier this year in February, she hung a transphobic sign outside her office in response to Rep. Marie Newman (D-IL) raising a transgender pride flag across the hallway in front of Newman’s congressional office suite to honor her daughter, Evie Newman, who is trans. “There are TWO genders: Male & Female. Trust The Science!” Greene’s sign read.

During the same time period, Greene launched a series of Twitter attacks and a floor speech in opposition to the Equality Act which was being debated for passage in the U.S. House.

After the debate, Newman tweeted a video of herself putting out the flag. She wrote: “Our neighbour, @RepMTG, tried to block the Equality Act because she believes prohibiting discrimination against trans Americans is ‘disgusting, immoral, and evil.’ Thought we’d put up our Transgender flag so she can look at it every time she opens her door.”

Greene tweeted in response: “Our neighbour, @RepMarieNewman, wants to pass the so-called ‘Equality’ Act to destroy women’s rights and religious freedoms. Thought we’d put up ours so she can look at it every time she opens her door.”

Greene has previously said, “Teaching racism and promoting sex, homosexuality, & normalizing transgender to children is mental/emotional child abuse.” She also attacked Republican Caitlyn Jenner, who is in a long-shot campaign to replace Democrat Gavin Newsom as governor of California in the recall election. “Stop promoting this man in a dress,” she tweeted.