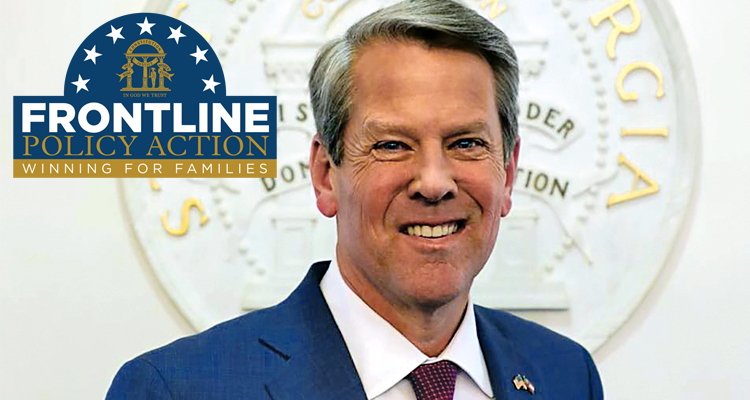 A conservative organization that has publicly endorsed Gov. Brian Kemp sent an email to supporters at the start of Pride month urging them to “intentionally reject” Pride.

Frontline Policy Action is a “state-focused, biblical organization that … address[es] issues of life, religious freedom, educational opportunity, God’s design, human dignity, free speech, and principled government,” according to its website. The organization released its endorsement of Gov. Kemp on May 5 ahead of the primary election, in which he won the Republican gubernatorial nomination.

“Time and again, our Governor has led the charge for our values — willing to stand up to the elites, the media, the pressures, Hollywood, and woke institutions,” Cole Muzio, the President of Frontline Policy Action, wrote in the endorsement. “And, through it all, I have had the privilege to see how he has endeavored to walk with the Lord, cherish his family, and serve the people of this state. He is a man of integrity, a devoted husband and father, and a leader we can trust.”

Less than a month later, on June 1, Frontline Policy Action sent an email to supporters with seven tips on how to “reject Pride.” Georgia Voice obtained a copy of the email.

“In 2022 America, the month of June is co-opted by those who want to embrace evil, ‘groom’ our children, and seek to pass their warped distortion of human sexuality as ‘normal,’” the email read. “It isn’t normal. You don’t have to accept it. And, as a Bible-believing Christian, you are called to reject a radical ideology that encourages people to be ‘proud of sin.’”

“The LGBTQ+ lifestyle is exactly that — sin,” the email continued. “And the LGBTQ+ Agenda is a desire to normalize sin, to impose ‘acceptance’ of sin on others, and to ‘groom’ a rising generation to view anyone willing to stand for truth as hateful, bigoted, and narrow-minded.”

The email went on to list seven ways to “intentionally” reject Pride month: deny money from those who promote Pride month, speak out on social media, urge your pastor to discuss “God’s Design for human sexuality,” ground your family in “God’s Word,” make your marriage inwardly and outwardly joyful, vote for a candidate that “supports God’s Design,” and donate to Frontline Policy Council, the organization’s nonprofit arm.

Gov. Kemp’s office did not issue a proclamation endorsing Pride month this year, and while advertisements for Gov. Kemp’s 2018 campaign were found on Grindr, he did not explicitly attempt to appeal to LGBTQ voters, even failing to respond to an LGBTQ acceptance survey from GLAAD. During his term, he has consistently advocated against the LGBTQ community. While he signed SB 164, which modernized Georgia’s HIV laws, he also signed HB 1084, which creates an athletics committee with the authority to ban trans youth from playing on gender-affirming sports teams. He not only signed the bill into law, he also personally visited both the House and Senate chambers during the final hours of session to push legislators to pass it.

Gov. Kemp’s anti-LGBTQ leadership has had an impact on the state. According to a report from Out Leadership published this month, the 2022 Out Leadership State LGBTQ Business Climate Index, Georgia ranks 33rd in the country for LGBTQ equality with a state index score of 52.73 out of 100. In the category ranking the governor’s political and religious attitudes, Georgia received a one, the lowest possible score on the five-point scale.

“The data reflects a troubling trend: too many states are mortgaging their future in order to be discriminatory against LGBTQ people,” the report reads. “Despite the best efforts of a few governors standing in opposition to their legislative counterparts, states are betting that short-term wins in the culture war will outweigh long term losses in talent recruitment, innovation, and consumer trust.”

Gov. Kemp will be up for reelection in November against Democrat Stacey Abrams. Georgia Voice reached out to Gov. Kemp’s office for comment and received no response.