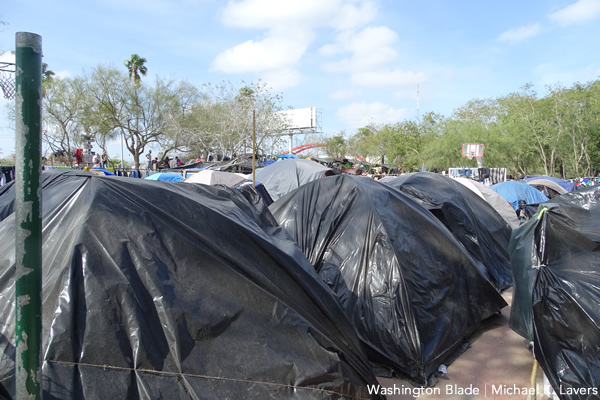 Advocates along the Mexico-U.S. border say they are increasingly concerned about the coronavirus’ impact on migrants.

Marin told the Washington Blade on Thursday during a telephone interview from Tijuana the shelter has implemented new personal hygiene procedures. Marin said the shelter currently has enough cleaning supplies, “but we don’t have anything that would be for long-term like four months or six months if we have to self-isolate ourselves.”

Marin also said 90 percent of the shelter’s residents have an underlying medical condition that makes them more vulnerable to coronavirus.

“If they were to get this disease, they would basically be more at-risk,” he told the Blade. “That’s why I want to see if we can take any actions to create a preparedness plan so we can have a response in time.”

Upwards of 2,000 migrants live in a camp in the Mexican city of Matamoros, which is across the Rio Grande from Brownsville, Texas. Many of the camp’s residents have been forced to return to Mexico under the Trump administration’s controversial “remain in Mexico” policy and await the outcome of their U.S. asylum cases.

Zavala spoke with the Blade from Matamoros shortly after the Trump administration announced the U.S.-Mexico border will remain closed for 30 days after its closure at midnight on Saturday.

Zavala noted Resource Center Matamoros and Global Response Management are the only two organizations that are currently working on the Mexican side of the river because all other non-governmental organizations have pulled their staff out of the city. Zavala told the Blade that groups in Texas’ Rio Grande Valley continue to donate money and make donations to them.

Zavala said Resource Center Matamoros is working to quarantine camp residents who are suspected to have the disease in local hotels. Zavala told the Blade she first drives to the hotel personal vehicle and then hires a private taxi to drive the person there “so we can avoid contact.”

Zavala said Resource Center Matamoros reached out to a woman with HIV who lives in the camp and asked her if she wanted to self-quarantine in a hotel. Zavala said the woman, who did not have any coronavirus symptoms, decided to isolate herself in the camp.

Zavala also said lawyers who represent migrants are no longer working from Resource Center Matamoros’ offices, but the organization continues to serve those with “immediate court dates” through a video doorbell system. Zavala said migrants are then able to send necessary documents to them via WhatsApp.

Zavala said on Friday there were two in-person “psychological interviews” that were scheduled months earlier. She told the Blade they washed their hands before entering the office and it was disinfected afterwards.

“Resource Center in general is closed,” said Zavala, noting Resource Center Matamoros staffers who distribute tents and supplies remain in the camp. “We’re trying to quarantine as much as we can, so there’s only a few staff that go in and out.”

The Organization for Refugee, Asylum and Migration has also launched a campaign to specifically help LGBTQ asylum seekers and refugees along the Mexico-U.S. border and in Kenya during the pandemic.

Mexican President Andrés Manuel López Obrador on Friday posted a video onto his Twitter page that shows him practicing social distancing, but both Zavala and Marin said the Mexican government’s response to coronavirus has not been as robust as that of the U.S.

“San Diego is doing an excellent job in protecting their citizens and taking the appropriate measures to keep them safe,” Marin told the Blade, noting San Diego is roughly 20 miles north of Tijuana. “It’s not as though they’re not doing anything (in Tijuana), but what they’re doing is very minimal.”

Marin said many bars in Tijuana were open on Thursday. He also said there is a lack of information from officials about coronavirus in the local media.

The Blade on Feb. 28 saw an electronic billboard on the Mexican side of the San Ysidro Port of Entry with coronavirus information. There was no such advisory on the U.S. side of the border.

“We’re never going to know and all of a sudden we’re going to have a lot of people sick,” said Marin.

Zavala told the Blade the Matamoros camp “is still running as is,” but many of the migrants who live there are “staying in.” Zavala said Resource Center Matamoros has added 30 more handwashing stations in the camp and distributed soap and masks.

“The education part, we’ve done a really good job,” added Zavala. “We’re just trying to keep everything sort of the same so that we don’t cause ripple effects that will be more disastrous later.”

The Trump administration on Friday also announced the U.S. as of midnight Saturday will not allow undocumented immigrants to enter the country from either Mexico or Canada.

Acting Department of Homeland Security Secretary Chad Wolf told reporters during the White House’s daily coronavirus briefing his department apprehends people from more than 120 countries around the world. Wolf noted “the vast majority” of these nations have coronavirus cases.

“Many of these individuals arrive with little or no identity, travel or medical documentation, making public health risk determinations all but impossible,” said Wolf. “It’s also important to note that the southern border would likely increase the strain on health systems in our border communities, taking away important and life-saving resources away from American citizens.”

“It’s hard to imagine travel more essential than the journey an asylum-seeker makes to flee persecution,” said Charanya Krishnaswami, advocacy director for the Americas at Amnesty International USA, in a statement. “Yet today’s restrictions, which empower the U.S. to push back people who lack proper documentation, may inexcusably prevent asylum-seekers and unaccompanied children — two of the populations at greatest risk of danger — from accessing safety.”

Advocates have also urged U.S. Immigration and Customs Enforcement to release from its custody people with HIV/AIDS and other detainees who are at heightened risk for coronavirus.

ICE on Wednesday announced it will “focus enforcement on public safety risks and individuals subject to mandatory detention based on criminal grounds” during the coronavirus. The statement that detailed the new policy directive made no mention of detention centers or detainees.

ICE has suspended visitation at all detention centers. Its website also notes “the health, welfare and safety of U.S. Immigration and Customs Enforcement (ICE) detainees is one of the agency’s highest priorities.”

“Since the onset of reports of Coronavirus Disease 2019 (COVID-19), ICE epidemiologists have been tracking the outbreak, regularly updating infection prevention and control protocols, and issuing guidance to ICE Health Service Corps (IHSC) staff for the screening and management of potential exposure among detainees,” it reads.

“ICE continues to incorporate CDC’s COVID-19 guidance, which is built upon the already established infectious disease monitoring and management protocols currently in use by the agency,” adds the website. “In addition, ICE is actively working with state and local health partners to determine if any detainee requires additional testing or monitoring to combat the spread of the virus.”

The American Civil Liberties Union, the ACLU of Washington and the Northwest Immigrants Rights Project earlier this week filed a federal lawsuit that calls for ICE to release detainees who are at high-risk for coronavirus. U.S. District Court Judge James Robart on Thursday ruled against them.

“The COVID-19 crisis lays bare our failure to treat migrants with human decency and dignity,” said Laura Rivera, director of the Southern Poverty Law Center’s Southeast Immigrant Freedom Initiative, in a statement. “The Trump administration and its enforcement agencies have been indifferent to the death and suffering of immigrants both at the border and in its cages set up across the country. The pandemic exacerbates this cruel indifference, and unless we swiftly change course, more will die than could be prevented.”

“These deaths will be on government hands,” added Rivera.