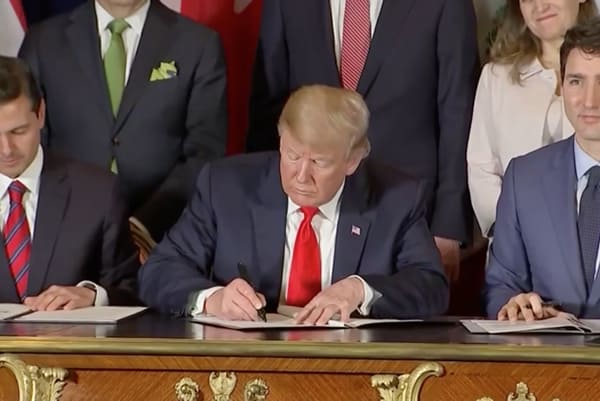 President Trump agreed on Friday to an updated trade agreement with Canada and Mexico that includes aspirational language encouraging member states to adopt policies against LGBT discrimination in the workforce — although it has been watered down from the initial proposal.

Colin Shonk, a spokesperson for the Canadian embassy in the United States, told the Washington Blade on Friday the language is in the United States-Mexico-Canada Agreement moments after Trump signed it at an event in Buenos Aires with Canadian Prime Minister Justin Trudeau and Mexican President Enrique Peña Nieto.

But as reported by Canadian Press, the language — which was aspirational to begin with — is even more watered down from the original version and makes clear the United States does not need to make changes to bar anti-LGBT discrimination to adhere to the trade agreement.

Although the initial draft called on member states to support policies against anti-LGBT and sex discrimination in employment, the new wording calls on each country to implement those policies as it “considers appropriate.” A footnote on the agreement also says Title VII of the Civil Rights Act of 1964 is “sufficient to fulfill the obligations” on labor rights, and “thus requires no additional action” by the United States.

That’s consistent with Trudeau’s hedging on whether he’d insist on including the language in the USMCA when asked by reporters prior to signing the agreement.

“In any trade deal, there are going to be people who would like this or like that or not want this or not want that,” Trudeau said. “We got to a good agreement that I think represents Canadian values, a Canadian approach, but also values that are broadly shared amongst citizens of our three countries.”

A Canadian official said the footnote on Title VII was added by the United States, but the new inclusions don’t do anything to change the enforceability of the LGBT provisions in the USMCA.

The Office of U.S. Trade Representative hasn’t responded to repeated requests to comment on the LGBT language in the bill or changes to it.

Geoffrey Gertz, a fellow at the Washington, D.C.-based Brookings Institution, questioned on Twitter why any member states would bother including the LGBT language in the agreement only to undercut it.

“Whatever you think of the LGBTQ provisions in the new NAFTA, this outcome – to include them but nullify them with a footnote – is ridiculous,” Getz wrote. “And it’s the kind of thing that will make progressives even more suspicious of engaging with trade liberalization.”

Trump, Trudeau and Nieto failed to mention the LGBT provisions during their signing event. Instead, Trump focused on the size of the agreement and new opportunities for American businesses.

“All of our countries will benefit greatly,” Trump said. “It is probably the largest trade deal ever made, also. In the United States, the new trade pact will support high-paying manufacturing jobs and promote greater access for American exports across the range of sectors, including our farming, manufacturing, and service industries.”

Trudeau talked about the economic benefits of the agreement for Canada, emphasizing the importance of free trade on the North American continent.

“Canadians got here because Team Canada was driven by the interests of the middle class,” Trudeau said. “Free and fair trade leads to more and better-paying middle-class jobs for more people. And the benefits of trade must be broadly and fairly shared. That is what modernizing NAFTA achieves, and that is why it was always so important to get this new agreement done right.”

Even though the LGBT provisions are watered-down, they’re still in the agreement despite objections from a group of 38 House Republicans led by Rep. Doug Lamborn (R-Colo.) who urged Trump to seek removal of that language, insisting the USMCA “is no place for the adoption of social policy.”

The USMCA must be ratified by Congress with implementing language for the agreement to take effect. It remains to be seen whether House Republicans will now vote against the agreement with the LGBT language, or if the USMCA has enough support for approval in the next Congress when Democrats will have a majority in the U.S. House.

Sen. Tammy Baldwin (D-Wis.), the only out lesbian in the U.S. Senate, said in a statement she opposed NAFTA on the basis that it cost her state manufacturing jobs and would only back the new agreement if it helps Wisconsin workers.

“As Congress works on legislation for this new deal I will be working to ensure that this new deal increases market access for our Wisconsin dairy farmers and cheese makers,” Baldwin said. “With the signing of the USMCA there is still more work to be done in Congress to ensure any final agreement stops the outsourcing of jobs to other countries, strengthens Buy America, puts in place real enforcement of labor provisions, and allows the United States to take action on currency manipulation. I will only support this new deal if we can make it a better deal for Wisconsin farmers, manufacturers, businesses and workers.”

CORRECTION: An initial version of this article relying on a spokesperson from the Canadian embassy in the United States reported the LGBT provisions in the original agreement were left intact. The Blade regrets the error.