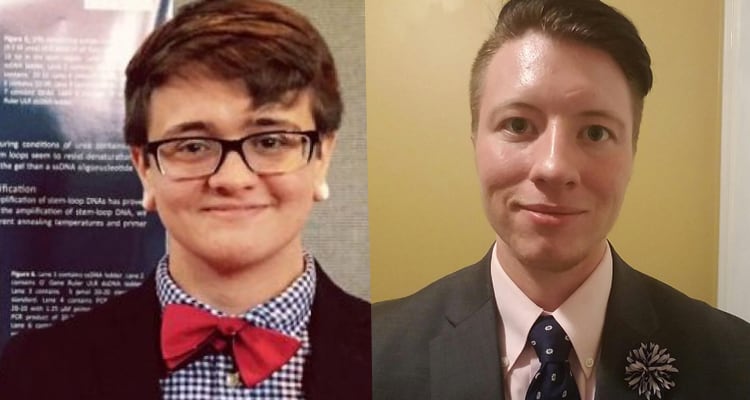 The Court of Appeals of Georgia surprised a few Lambda Legal clients and attorneys this morning with an early Valentine’s Day present — two Columbia County transgender men are now able to change their names.

The decision came as a complete shock for attorney Beth Littrell and plaintiffs Rowan Feldhaus and Andrew Baumert, who were supposed to present oral arguments to an appellate panel on Feb. 9.

“The court decided it didn’t even need to hear from us,” Littrell said. “The arguments we already presented on paper persuaded it to direct the lower court to grant the name changes.”

Judge David J. Roper denied the men’s requests for name changes in separate 2015 and 2016 decisions, citing the name changes would “confuse and mislead” the public, and demanded the names be gender-neutral enough before granting approval, according to the appellate decision. The Court of Appeals reversed Roper’s decision and directed the lower court to “remand to enter an order” changing their names as requested.

“I was completely off-guard and surprised and I was like, is this a joke? This is too surreal,” Feldhaus, a resident of Grovetown, Georgia, said. “I’m more than happy with what I heard today. I just felt a since of ease come over me and it’s just done. There’s a precedence for this.”

Both Feldhaus and Baumert sought to change their first and middle names as part of their female-to-male transitions.

“This request is not unusual and is in line with standard-of-care for treating gender dysphoria, and in line with First Amendment rights,” Littrell said. “The only remarkable think about these cases was the judge denied the request. The judge did so in both cases based on the court’s own ‘policy’ of refusing to approve [of transgender name changes] unless he approved of the name requested.”

The names requested were “too male” for Roper, who decided both of the cases months apart.

“The decisions were almost verbatim the same,” Littrell said.“Name changes are one of the ways in which transgender people live their truth and live authentically. To have the government step in and deny transgender persons the right to live their truth is outrageous, unconstitutional and we wanted to ensure it didn’t happen to another transgender Georgian.”

Though the court does have the right to deny a requested name change, that is for instances in which the person is trying to change his name to avoid criminal charges or for other fraudulent reasons, Littrell said.

“What we argued, and what the law generally stands for, is that the discretion of the courts have to be tied to general legal principles; it can’t just be the judge’s own prejudices,” she said. “The Court of Appeals argued that there is no fraud in allowing a trans person to change their name in accordance with their gender identity.”

Feldhaus said the controversy surrounding his name change request wasn’t at all expected. He proved that he was not seeking a name change for fraudulent or criminal reasons. After convincing Roper that “Rowan” was gender neutral, the judge refused to grant the name changed based on his chosen middle name, Elijah.

Baumert had a similar experience, saying that despite testimony from his parents, Roper asked intrusive questions not germane to the name-change issue and messed up pronouns “on purpose.”

“I hope that he’s embarrassed among his peers,” Baumert said.

The next step for Baumert and Feldhaus is to take their name-change memorandums and start changing their names on legal documents, licenses and social security cards.

“It was their prejudice that got in the way. You can have a personal view about something, but you have to think about what the public wants,” he said.

Attempts to reach Judge Roper were unsuccessful as of press time.