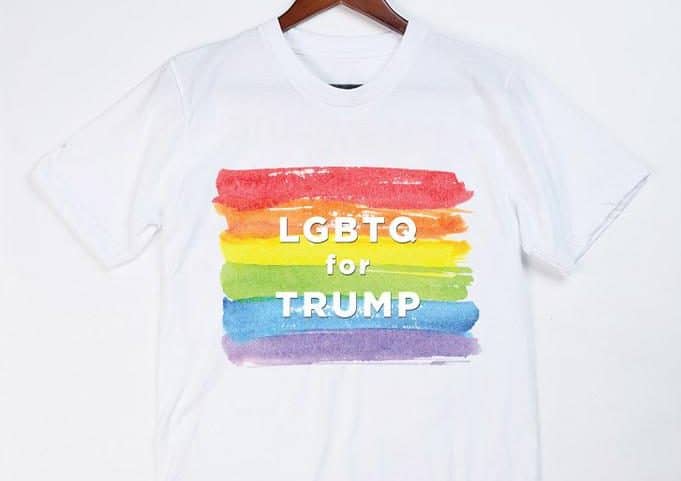 The shirt features a watercolor rainbow design and the phrase “LGBTQ for Trump.” The back bears the Trump-Pence campaign logo and phrase, “Make America Great Again.” It normally retails for $30 but is currently on sale for $24.

“Show your pride and your support for Trump with this exclusive equality tee,” the description of the shirt reads.

While President Trump campaigned in 2016 on the promise of supporting the LGBTQ community, he has passed a number of anti-LGBTQ laws since taking office.

According to GLAAD’s Trump Accountability Project, the Trump administration has issued 108 attacks on the LGBTQ community and counting while in office. These attacks include banning transgender troops from the military and cutting funding for worldwide HIV/AIDS treatment.

GLAAD issued a statement criticizing the administration’s hypocrisy for releasing the merchandise while not fighting to protect LGBTQ Americans.

“The Trump Administration is trying to pull yet another con job on LGBTQ Americans. but like their other desperate ploys, this idea will fall flat,” said GLAAD Chief Programs Officer Zeke Stokes. “Trump should hold the sales pitch and try issuing a statement honoring June as National Pride Month and the countless of LGBTQ Americans who fought tooth and nail for the level of acceptance our nation sees today.”

“From Day One of this administration, Donald Trump and Mike Pence have ruthlessly attacked the rights and livelihoods of LGBTQ people,” said Charlotte Clymer, press secretary for HRC. “They have ignored anti-LGBTQ atrocities in Chechnya and anti-trans violence here at home.”