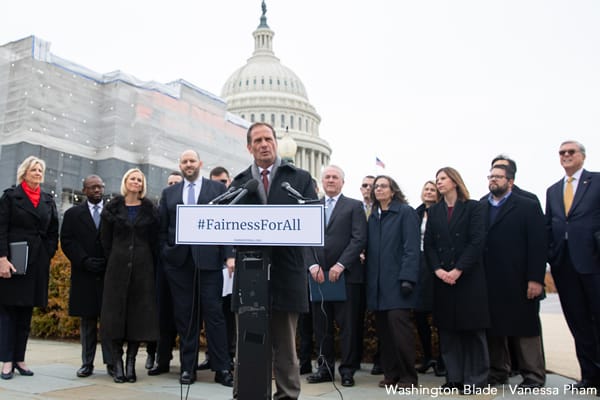 Fairness for All Act Seeks Middle Ground on LGBTQ Rights

Newly introduced legislation in the U.S. House backed by the Mormon Church seeks to strike a middle ground on LGBT rights and religious freedom in federal civil rights law, although major proponents of each refuse to support the legislation.

Introduced by Rep. Chris Stewart (R-Utah) on Friday, the Fairness for All Act would strike balance between LGBT rights and religious freedom in way proponents say would protect First Amendment rights. That way, however, permits anti-LGBT discrimination from religious institutions and small-business wedding vendors.

“Throughout history, there are time when principles come into conflicts, and often they are conflicting good principles, both of them with equal value,” Stewart said at Capitol Hill news conference Friday.

“The job we have before us in our society today is a good example of that, where we have the principle of non-discrimination, that every American should be treated fairly and with respect and with dignity, and at the same time, the sincerely held belief that religious faith and principles also matter, and how do we reconcile those two conflicting principles,” Stewart added. “This is what we are trying to do with this legislation.”

The Fairness for All Act is seen as an alternative to the Equality Act, legislation approved by the House in May under the Democratic majority — with five Republican votes. The Equality Act would make anti-LGBT discrimination a form of sex discrimination under the Civil Rights Act of 1964 and clarify the Religious Freedom Restoration Act can’t be a justification for discrimination.

Much like the Equality Act, the Fairness for All Act would make anti-LGBT discrimination against federal law, but it would also institute a accommodation for institutions like religious organization and small-business wedding vendors.

But in contrast to the Equality Act, the Fairness for All Act would preserve Religious Freedom Restoration Act and protect the tax-exempt status of religious colleges and universities that oppose same-sex marriage, such as Brigham Young University, Bethel University and Catholic University.

The Fairness for All Act would also extend protections to small business whose owners refuse to provide services to same-sex weddings based on religious objections. Among them is Jack Phillips, the owner of Masterpiece Cakeshop, who gained notoriety when his reached the Supreme Court and justices ruled narrowly in his favor based on the facts of the case.

The measure would prohibit anti-LGBT discrimination at “any store, shopping center or online retailer or provider of online services that has 15 or more employees for each working day in each of 20 or more calendar weeks in the current or preceding calendar year,” but states the threshold doesn’t apply to claims of discrimination based on race, color or national origin or the small business wedding vendors excluded under the measure.

Lastly, the Fairness for All Act purports to protect religiously affiliated adoption agencies “so they can continue to serve vulnerable children and willing couples, while at the same time ensuring the ability of LGBT persons to adopt and foster children too.”

Unlike the Equality Act, the Fairness for All Act also makes clear access to abortion services aren’t protected, but stipulates the measure shouldn’t be construed to impose a penalty on women who have had an abortion or seek abortion-related services.

Among the proponents of the Fairness for All Act is the Church of Latter-day Saint and Seventh-Day Adventist Church, which expressed support for the legislation in a statement Friday.

Shirley Hoogstra, president of Council for Christian Colleges & Universities, spoke out in favor of the legislation at the Capitol Hill news conference.

“This coalition represents civic pluralism at its best,” Hoogstra said. “We want a society where people with deep differences can live alongside each other with respect and understanding.”

But the nation’s leading advocacy group for LGBTQ rights says the Fairness for All Act doesn’t go far enough, and an anti-LGBT legal firm that purports to protect religious freedom also doesn’t support the legislation.

Alphonso David, president of the Human Rights Campaign, said he “strongly oppose[s]” the Fairness for All Act because it sells LGBTQ people short and erodes existing protections under federal civil rights law.

“The so-called Fairness for All Act is an unacceptable, partisan vehicle that erodes existing civil rights protections based on race, sex and religion, while sanctioning discrimination against lesbian, gay, bisexual, transgender and queer people,” David said. “For LGBTQ people living at the intersection of multiple marginalized identities, this bill is a double whammy of dangerous rollbacks and discriminatory carve-outs. This bill is both wrong and harmful, and we strongly oppose it.

David said the right path for advancing LGBTQ rights is the Equality Act, which he said is necessary because “LGBTQ people deserve full federal equality, period.”

“The Equality Act, on the other hand, has already passed through the House of Representatives with a bipartisan majority, the support of more than 260 leading companies and more than 500 civil rights, religious, medical and social welfare organizations, and is our movement — and, most importantly, our community’s — top legislative priority,” David said.

A spokesperson for Alliance Defending Freedom, the anti-LGBT legal firm that has represented Masterpiece Cakeshop and schools seeking to deny transgender kids access to bathroom consistent with their gender identity, referred to the Washington Blade to a 2018 statement from the organization against the Fairness for All Act Act.

“Every person should be treated with dignity and respect,” said ADF Senior Vice President of U.S. Legal Division Kristen Waggoner. “Unfortunately, sexual orientation and gender identity laws like the so-called ‘Fairness for All’ proposal undermine both fairness and freedom. This proposal is a SOGI law under different branding, with special — and likely temporary— exemptions that protect only a favored few.

A chief proponent of the Fairness for All Act, however, is the American Unity Fund, a pro-LGBTQ Republican organization backed by philanthropist and GOP donor Paul Singer.

Tyler Deaton, senior adviser to the American Unity Fund, said his organization supports the Equality Act, but prefers the Fairness for All Act to prohibit anti-LGBT discrimination.

“We have to have black letter laws on the books that can make it explicit when we’re protected and when we’re not,” Deaton said. “This is hard thing from me to say as a gay guy. There are going to be times that there are religious organizations that are going to have the freedom to refuse to serve me or employ me.”

Deaton said the Human Rights Campaign’s opposition to the Fairness for All Act was “disheartening,” especially the assertion it would undermine existing protections based on race, sex and national origin.

“I think that the statement exaggerates impacts that the bill would have on existing civil rights,” Deaton said. “And I want to be clear on this point, which is that Fairness for All does not touch, or erode, or diminish any civil rights that are on the books today, and in fact, it is biggest expansion of civil rights since the passage in 1964 of the Civil Rights Act, and that’s similar to the Equality Act.”

Another supporter of the legislation is Republican LGBT ally Margaret Hoover, who voiced support for the measure in an interview last month with the Los Angeles Blade and at the Capitol Hill news conference.

“We know that we expect that this bill will be met with criticism from both sides of the aisle,” Hoover said. “Compromise is never easy, but it is our view that LGBTQ Americans cannot afford to wait a single day longer.”

Just about every LGBTQ advocate pushing for the Equality Act came out against the Fairness for All Act, including Justin Nelson, president of the National LGBTQ Chamber of Commerce.

But there was some openness among LGBTQ advocates. Striking a welcoming chord on the Fairness for All Act was Shannon Minter, legal director for the National Center for Lesbian Rights.

“The introduction of this historic bill marks the first time that conservative religious organizations and leaders have supported comprehensive federal protections for LGBTQ people,” Minter said. “While the details of the bill require more careful consideration, it marks an important milestone in the growing national support for the equality and dignity of LGBTQ people.”

The Fairness for All Act is introduced as the U.S. Supreme Court is considering litigation that would clarify whether Title VII of the Civil Rights Act of 1964, which bans discrimination on the basis of sex in employment, also applies to cases of anti-LGBT discrimination.

If the court rules in favor of LGBT workers, it could have far reaching implications and make federal legislation against anti-LGBT discrimination moot in employment, housing and education (although a legislative change would still be necessary to ban anti-LGBT bias in public accommodations and federal programs). If the court rules against LGBT workers, they would have no protections under federal law, and a legislative fix would be all the more needed.

Arguably the very introduction of the Fairness for All Act bolsters the case Congress didn’t intent to include LGBTQ people when it passed the Civil Rights of 1964, but Deaton denied that was case, adding that line has already been crossed with the Equality Act.

The Fairness for All Act will be a tough sell in the House, which addressed the issue of expanding LGBT non-discrimination protections by passing the Equality Act. In the Senate, companion hasn’t even yet been introduced.

“Speaker Pelosi strongly opposes this legislation,” Hammill said. “It represents a step backward in many respects and is a partisan effort to that would lead to much more discrimination in our country not less.”

The solution for enacting LGBT non-discrimination protections under federal law, Hammill said, would be for Senate Majority Leader Mitch McConnell (R-Ky.) to bring up the Equality Act.

Then there’s President Trump. Asked whether he spoken with the White House about the Fairness for All Act, Deaton declined to discuss conversations.

The Trump administration, through White House Deputy Press Secretary Judd Deere, signaled an openness to the Fairness for All Act when asked by the Washington Blade about the legislation.

“President Trump has protected human dignity, fought for inclusion, promoted LGBTQ Americans and strongly protected religious freedom for everyone while in office,” Deere said. “The White House looks forward to reviewing the legislation.”