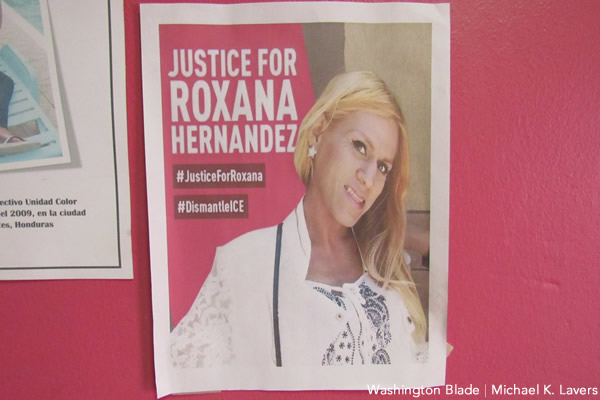 The family of a transgender woman with HIV who died in U.S. Immigration and Customs Enforcement custody in 2018 has filed a federal lawsuit against five private companies that were responsible for her care.

Hernández, who was from Honduras, entered U.S. Customs and Border Protection custody on May 9, 2018, when she asked for asylum at the San Ysidro Port of Entry in San Diego. She was later sent to the Cibola County Correctional Center, a facility in Milan N.M., that CoreCivic, which was previously known as the Corrections Corporation of America, operates.

Hernández was admitted to Cibola General Hospital in Grants, N.M., shortly after she arrived at the detention center. Hernández died at Lovelace Medical Center in Albuquerque, N.M., on May 25, 2018.

The lawsuit alleges Hernández on May 14, 2018, “exhibited visible signs of deterioration requiring immediate medical intervention” when Management and Training Corporation transported her and 12 other trans detainees from San Ysidro to the San Luis Regional Detention Center, a facility in San Luis, Ariz., that LaSalle Corrections operates.

“MTC denied Roxsana and her fellow detainees food, water, and restroom access throughout their transfer,” reads the lawsuit.

The lawsuit notes one detainee said Hernández appeared “very weak and pale, almost yellow in pallor, with dark circles under her eyes” when she was at the San Luis Regional Detention Center.

Hernández was at the facility for only a “few hours,” but she “used the bathroom several times to vomit or spit up phlegm.” The lawsuit claims Hernández “was so weak from fever that she spent most of her time at SLRDC (San Luis Regional Detention Center) laying on the floor, coughing.”

“Officers of Defendant LaSalle Corrections witnessed Roxsana’s obvious state of medical need and failed to offer her emergency medical assistance,” reads the lawsuit. “Eventually during her time at SLRDC Roxsana was so ill she could not eat and had to use the restroom approximately every 15 minutes because she had such bad diarrhea.”

The lawsuit states Hernández and more than two dozen other trans detainees at around midnight on May 15 boarded a bus that took them to the Phoenix-Mesa Gateway Airport in the Phoenix suburb of Mesa.

“Roxsana was very ill during the four-hour bus ride and pleaded for help to a person who sat with her, saying words to the effect of, ‘Help me! I don’t know if I’m going to survive,’” reads the lawsuit.

The lawsuit alleges a LaSalle Corrections officer “threatened” Hernández and the other detainees with whom she was traveling. The lawsuit says one detainee asked officers in both English and Spanish to provide medical care to Hernández, but they “ignored her.”

“When they arrived at the airport, one of the people being transported by LaSalle alongside Roxsana told an officer with beige pants and long red hair that Roxsana was very sick and needed immediate medical attention,” reads the lawsuit. “The officer refused to respond to her. During her five hour stay in the Mesa airport Roxsana remained in LaSalle’s custody and was provided no medical care or assistance for her sickness.”

The lawsuit states Hernández and the other detainees flew to El Paso, Texas, and arrived at the El Paso Processing Center at around 3:15 p.m. The lawsuit notes Hernández remained at the facility until the morning of May 16, 2018.

“She and her fellow asylum seekers woke up to ICE officers presenting them food that they were instructed to eat for breakfast at around 5:00 a.m.,” reads the lawsuit. “Roxsana attempted to eat the meal provided, but ended up vomiting and then going back to sleep.”

“By this time, Roxsana appeared to all around her to be gravely ill,” reads the lawsuit. “Despite LaSalle’s knowledge of Roxsana’s urgent need for medical care, during the entire time Roxsana was in LaSalle’s custody LaSalle did not provide her with medical care or assistance to alleviate her suffering.”

The lawsuit says Hernández and 29 other detainees who were going to the Cibola County Correctional Center boarded a bus at around 9 a.m.

“Each person was provided an 8-ounce bottle of water and sandwich to last the entire five and-half hour journey to the Cibola detention center in New Mexico,” says the lawsuit, which notes the temperature in El Paso that day reached 97 degrees before noon.

The lawsuit notes Hernández asked an officer for water during the trip, but he told her that he did not speak Spanish.

Hernández reportedly “had a fever and produced a significant amount of phlegm during the trip” and had bloody sputum when she blew her nose. The lawsuit also notes Hernández “felt dizzy and extremely exhausted, and her stomach hurt badly.”

The lawsuit says the bus arrived at the ICE Criminal Alien Program facility in Albuquerque at around 2:30 p.m.

“Despite GPS’s knowledge of Roxsana’s urgent need for medical care, during the entire time Roxsana was in GPS’s custody GPS did not provide her with medical care or assistance to alleviate her suffering,” it reads.

The lawsuit says officers from TransCor drove Hernández and 28 other trans detainees to the Cibola County Correctional Center, which is roughly 80 miles west of Albuquerque. The detainees arrived at the facility shortly after 8 p.m.

“Throughout this trip, Roxsana continued to appear gravely ill,” reads the lawsuit, noting she was unable to eat. 94. “Roxsana required immediate medical assistance that TransCor employees neglected to provide.”

The Cibola County Correctional Center at the time had a unit specifically for trans women who were in ICE custody.

The lawsuit states Hernández was booked into the facility at around 1:15 a.m. on May 17. It notes she spent the night in the facility’s “medical waiting room.”

“Roxsana lay on the floor, only getting up to use the restroom or drink a beverage officers brought around 4 a.m.,” reads the lawsuit. “Roxsana was so weak and ill that she became delirious.”

The lawsuit states Hernández was brought to an “onsite medical provider who conducted an intake screening.” Hernández received “electrolytes and Ensure” before she returned to a holding cell.

The lawsuit states officers at the detention center called an ambulance that brought Hernández to Cibola General Hospital at 11:44 a.m. Hernández later that day was airlifted to Lovelace Medical Center where she died.

“Each time medical staff needed CoreCivic officers to remove her restraints, the officer on duty made a call to ‘central’ to receive approval to remove them, delaying Roxsana’s receipt of medical care,” notes the lawsuit. “CoreCivic officers kept Roxsana shackled even after her treating medical providers medically paralyzed her and when she first went into cardiac arrest.”

‘Every private entity tasked with Roxsana’s care failed her’

An autopsy the New Mexico Office of the Medical Investigator performed concluded Hernández died from Castleman disease associated with AIDS.

A second autopsy` that former Georgia Chief Medical Examiner Kris Sperry performed at the Transgender Law Center’s request concluded the cause of death was “most probably severe complications of dehydration superimposed upon HIV infection, with the probable presence of one or more opportunistic infections.” The second autopsy also found “evidence of physical abuse” that included bruising on Hernández’s rib cage and contusions on her body.

“Every private entity tasked with Roxsana’s care failed her,” said Dale Melchert, a Transgender Law Center staff attorney, in a press release that announced the lawsuit. “What we know about the short time that Roxsana was in immigration custody is that the officers tasked with transporting her saw her health deteriorate, heard her cries for help, and did nothing. She needlessly suffered as a result of their inaction.”

ICE has denied allegations that Hernández was abused while in its custody.

Amanda Gilchrist, a spokesperson for CoreCivic, on Thursday told the Washington Blade in a statement the company offers “our deepest condolences to the family and friends of Roxsana Hernández.” Gilchrist also noted Hernández was “gravely ill” when she arrived at the Cibola County Correctional Center.

“When she arrived, she went through the intake process, which includes a medical evaluation,” said Gilchrist. “The medical team made the determination that she needed to be immediately transported to an outside hospital.”

“Ms. Hernandez was only at Cibola for 12 hours, where she stayed in the intake area before being transported to the hospital where she passed away nine days later,” she added.

Issa Arnita, a spokesperson for the Management and Training Corporation, on Thursday told the Blade in an email the company “disputes the allegations in the lawsuit, but is unable to comment any further because of the litigation.” Arnita in a second email noted Hernández was in Management and Training Corporation’s custody for “less than four hours, more than a week before her death.”