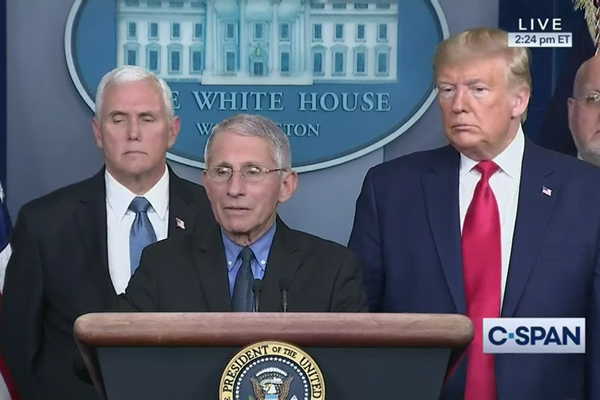 Dr. Anthony Fauci said Tuesday the visibility LGBTQ people brought to themselves during the height of the HIV/AIDS epidemic helped change the tide for public perception.

Fauci made the remarks during the daily White House Coronavirus Task Force briefing when responding to COVID-19’s disproportionate impact on black Americans, saying the disease has “shed a light” on health disparities in the United States much like HIV/AIDS did with LGBTQ people.

As head of the National Institute of Allergy & Infectious Diseases, Fauci was responsible for developing medications to treat HIV/AIDS at the height of epidemic. His efforts resulted in drugs still used today, although that came after activism of groups like ACT UP pushing the U.S. government to release the medication.

The impact of HIV/AIDS on LGBTQ people, Fauci said, is similar to the impact COVID-19 is having on African-Americans.

“When you’re in the middle of a crisis, like we are now with the coronavirus, it really does have ultimately shine a very bright light on some of the real weaknesses and foibles in our society,” Fauci said.

State data on COVID-19 is beginning to reflect African-Americans suffer from the disease at a greater rate than others.

Fauci said COVID-19’s has a disproportionate impact on black people not because they’re getting infected more often, but because the population suffers from health disparities.

“When they do get infected, their underlying medical conditions — the diabetes, the hypertension, the obesity, the asthma — those are the kind of things that wind them up in the ICU and ultimately give them a higher death rate,” Fauci said.

Fauci concluded the COVID-19 epidemic “will end,” but when that happens “there will still be health disparities which we really do need to address in the African-American community.”

President Trump expressed indignation over the disproportionate impact COVID-19 is having on the black population.

“What’s happening is we’re trying to find out why is it that it’s three and four times,” Trump said, “Now, maybe that’s not going to be the final number, but why is it three or four times more so for the black community as opposed to other people. It doesn’t make sense, and I don’t like it.”

Trump said his administration would have statistics on COVID-19’s impact on black people in “probably two to three days.”

Asked by a reporter if that pattern of black people being disproportionately affected by COVID-19 will continue nationwide, Fauci hinted that was the case.

“I can’t be confident to predict patterns, but the underlying reason why that is happening doesn’t change from state to state,” Fauci said. “I expect that when African-Americans get infected, given the disproportionate disparity of the underlying conditions that lead to complications like the ones I mentioned, I expect that we will still see the pattern that when you loo at the proportion of people who get into serious trouble and die, again, it’s going to be disproportionate towards the African-Americans. I do expect.”

Fauci affirmed the federal government is now leading the charge in collecting information said it will be public in days or the coming week.

Although states are collecting information on the racial and ethnic identities of COVID-19 patients, they aren’t ascertaining whether patients are LGBTQ. The lack of information has angered LGBTQ advocates, who are calling for greater data collection because LGBTQ are vulnerable to COVID-19.