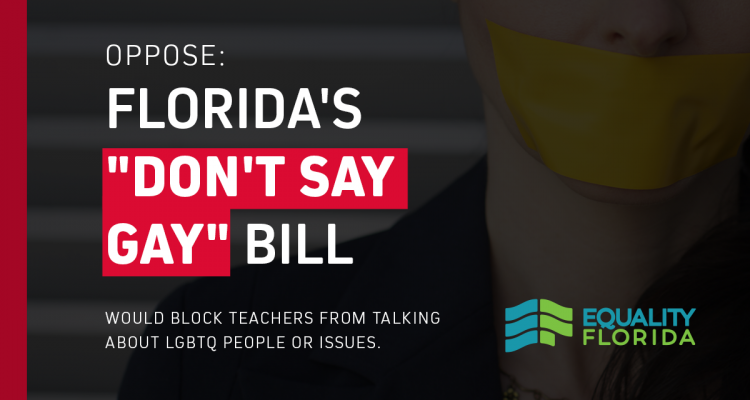 A Florida Senate committee passed legislation Monday that would ban classroom discussions about LGBTQ people, referred to by opponents as the “Don’t Say Gay” bill, after the state House of Representatives passed it last week.

The Florida Senate Appropriations Committee passed House Bill 1557 by a vote of 12-8, with one Republican state senator, Jeff Brandes (R-24), joining Democrats in voting against the bill. The legislation, titled “Parental Rights in Education,” will now head to the Senate floor, where it is expected to pass. If the Senate approves the bill, it will head to the desk of Florida Republican Gov. Ron DeSantis, who has signaled support for the legislation.

“I am not going to support the bill today in hopes that we can find a way to love our neighbors,” said Brandes.

The measure, which has garnered national media attention and condemnation from the White House, would ban classroom discussions about sexual orientation and gender identity that are not “age-appropriate” in schools — though it is not clear what is considered “age-appropriate.”

Brandes, who voted with Democrats Monday, filed an amendment to the bill last Friday that would have replaced the words “sexual orientation or gender identity” with “human sexuality or sexual activity,” saying it “accomplishes the goal without targeting anyone.” But the amendment failed.

The committee’s passage of the bill came as Democrats, advocates and LGBTQ children in the state continued to warn lawmakers about the dangers of the measure.

“The world is watching. Do not erase our community. Do not erase our history,” Joe Saunders, senior political director for statewide LGBTQ organization Equality Florida, told the committee. “It is always age appropriate to talk about the fact that we exist.”

Supporters of the legislation say it is about “empowering parents” and improving the lives of children in the state.

“Creating boundaries at an early age of what is appropriate in our schools, when we are funding our schools, is not hate,” said state Sen. Joe Harding (R-22), the bill’s author and chief sponsor, last week. “It’s actually providing boundaries, and it’s fair to our teachers and our school districts to know what we expect.”

The Trevor Project, the world’s largest suicide prevention and mental health organization for LGBTQ youth, said the measure erases “LGBTQ identity, history and culture — as well as LGBTQ students themselves.”

“LGBTQ students and families deserve to see themselves reflected in the classroom. What they don’t deserve is stigma and censorship from the government,” said Amit Paley, CEO and executive director of The Trevor Project. “Removing LGBTQ people and topics from public schools will only work to further shame a group of young people who already face disproportionate rates of discrimination, bullying, and suicide attempts. The Trevor Project urges lawmakers to protect young LGBTQ Floridians and foster acceptance and support in education.”

According to the Trevor Project, LGBTQ youth who learned about LGBTQ issues or people in classes at school had 23 percent lower odds of reporting a suicide attempt in the past year. Polling from the Public Opinion Research Lab (PORL) at the University of North Florida found 49 percent of Floridians oppose the legislation while 40 percent approve.