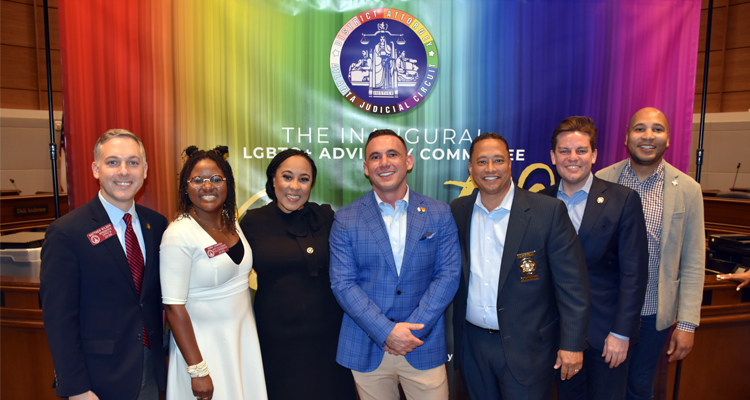 In a historic move, the Fulton County District Attorney’s office has launched its LGBTQ Advisory Committee, the first of its kind in the Southeast.

Deputy District Attorney Will Wooten, who heads the office’s white collar crimes unit and is part of the LGBTQ community, announced the formation of the committee in June at the FCDA LGBTQ+ Crimes Victim Vigil. The committee has now been officially established, with 28 members sworn in at a ceremony held on March 22. Wooten is the committee chair, along with Caitlin Bradley. Bradley is the Hate Crimes and LGBTQ+ Victim Advocate for Fulton County, a position funded by a three-year grant awarded by the Department of Justice.

“Her exclusive purpose is to be the victim advocate for any case that has an LGBTQ victim — that includes both hate crimes and non-hate crimes, things like domestic violence between same-sex partners where the issues are just a bit different,” Wooten said.

The committee will work with members of the LGBTQ community to ensure cases that involve LGBTQ people are handled correctly. Wooten told Georgia Voice that the committee’s priority will be to ensure that LGBTQ people living in Fulton County feel like they are being represented and heard and healing the historical discomfort LGBTQ individuals have felt toward law enforcement, especially amid an influx of anti-LGBTQ (and specifically anti-trans) violence.

“There’s been a lot of press about violence against LGBTQ people, specifically trans people and even more specifically trans women of color,” Wooten said. “I just felt like we needed to make sure we’re taking care of LGBTQ people and make sure LGBTQ people feel safe and protected and feel like they can come to us for help. That was the goal of the board in its inception. We want to let queer people in Atlanta know we’re here and that we’re a resource that’s dedicated to helping.”

To bridge the gap, the committee plans to host town hall events to give Fulton County’s LGBTQ community the opportunity to voice its concerns and point out the real issues impacting them.

The committee will also spearhead LGBTQ sensitivity training and advise DA Fani Willis’s office on LGBTQ-inclusive policy, with a specific focus on the transgender community.

“We’ve got some easy, short-term goals, like providing LGBTQ sensitivity training to our office and making that available to our law enforcement partners, the Atlanta Police Department, and Fulton County Sheriff’s Office,” Wooten said. “We even want to bring something like that to the judges, to let the judges in Fulton County know when a trans person comes into the courtroom, how they should refer to them, ask them what their pronouns and chosen name are. The bigger goals are to advise the DA on policy. One of the things we’re working on right now is a best practices guide on names and pronouns of trans people, and we want that to include not just victims but defendants as well. Everybody deserves to be respected, and that includes defendants, even people with the most serious crimes. They deserve that basic human respect.”

Committee members include attorneys, legal assistants, investigators, and advocates from the FCDA’s office, as well as several members from outside the office, including Malik Brown, the Director of LGBTQ Affairs for the City of Atlanta, as well as members from LGBTQ advocacy organizations like Georgia Equality and Family First. At the ceremony on March 22, several of Sheriff Patrick Labat’s deputies were also sworn in under the same oath, signaling their support and dedication to “advocat[ing] for respect, visibility, protection, and equal rights for all LGBTQ+ persons who interact with the criminal justice system.”

“We just want queer people to know there are queer people in our office,” Wooten said, “and we’re here and we see you and we’re looking out for you.”