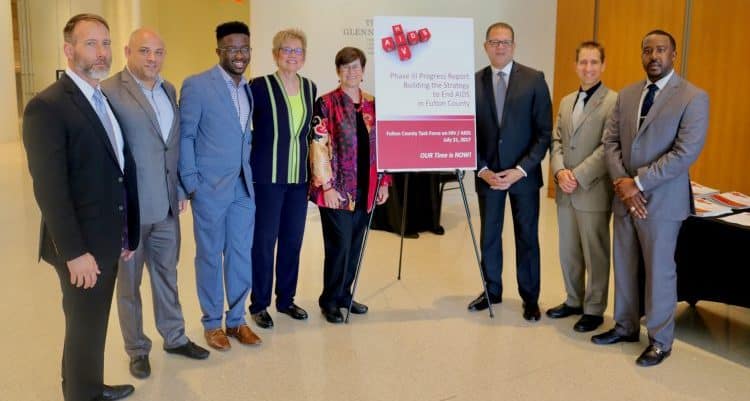 New strides are being made in Atlanta to eliminate HIV/AIDS.

On July 31, the Fulton County Task Force on HIV/AIDS presented its phase three progress report to end AIDS in the county. This was the last official day the task force existed, as on Aug. 1 the new HIV/AIDS Prevention, Care and Policy Advisory Committee came into existence.

“There is a structural change that is taking place right now. The Board of Commissioners, particularly Chairman [John] Eaves and Vice Chair [Joan] Garner, before she passed away, felt this was such important work they wanted to see it made permanent with a permanent advisory committee instead of a temporary task force,” said Dr. Melanie Thompson, principal investigator for the AIDS Research Consortium of Atlanta and member of the task force.

Each commissioner can appoint two people to the committee. Thompson said the task force plans to put together and submit to the board some recommendations for appointees.

“We want to make sure they are people who have expertise in HIV and that people living with HIV are represented on the advisory committee,” she said.

The new advisory committee comes on the heels of the commission losing two of its champions in the fight against HIV/AIDS: Garner passed away earlier this year, and Eaves is a candidate for mayor of Atlanta.

“It is a huge blow,” Thompson said. “Particularly [Garner], of course, who really has been such a stalwart supporter of HIV elimination for decades, but we have advocates on the Board of Commissioners. We feel that the task force had had broad support from all the board.”

One of those is Vice Chairman Bob Ellis, who fine-tuned the resolution to create the committee.

The task force formed in December 2014, and presented two sets of reports and strategies since..

“That was a result of Chairman Eaves and Commissioner Joan Garner hearing the devastating statistics of HIV in Fulton County, and feeling like something had to be done,” Thompson said. “The task force quickly decided that the most important thing we could do in addition to giving advice to the Board of Commissioners in general was to put together a strategic plan, which we call the ‘Strategy to End AIDS in Fulton County.’”

That strategic plan encompasses a number of topics and how the county could work to end the epidemic.

In the years since it was created, the task force held dozens of listening sessions, face-to-face meetings to address specific issues, weekly conference calls and meetings to determine what the top priorities are, Thompson said.

During the July 31 report, Thompson said the task force’s main goal was to ask the commissioners for policy decisions and resolutions.

“One of the things that is high on our list is being sure that all health and jail facilities in Fulton County have contractual requirements too implement routine opt-out HIV testing,” Thompson said. “We want to … be sure that comprehensive intercultural awareness and competence plans are included in these contracts. … The reason this is important is everywhere we’ve gone across the county, what we hear from people is that our clinics are just not welcoming. They may feel stigmatized, but also our systems aren’t working very well to get them into care.”

The task force also requested funding for increased staff to help with pre-exposure prophylaxis treatments, an area not covered yet under the county’s budget.

“In addition, they are asking for funding to increase retention in care and supportive services, like care navigators, to help people stay in care,” Thompson said. “If we keep people in care, we can do a pretty good job of getting them anti-retroviral therapy and getting their virus suppressed, but we have a very hard time keeping people in care.”