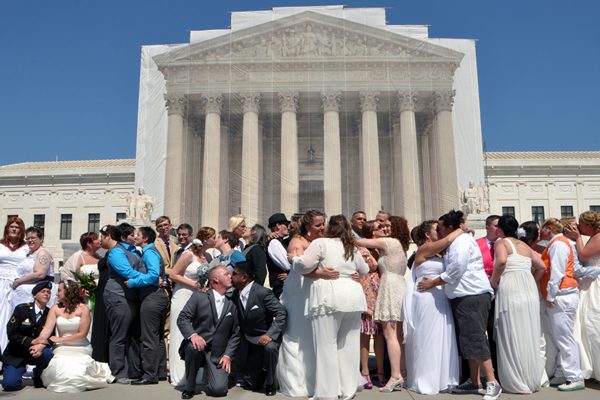 “I Do.” A mass wedding was held in front of the U.S. Supreme Court on June 21, 2013. Participants were bussed in from states that banned same-sex marriage to legally wed in D.C., a jurisdiction that enacted marriage equality years before the 2015 Supreme Court ruling. (Washington Blade photo by Michael Key)

According to the data kept by the firm, the upward trend steadily increased with a majority approval in 2011, followed by a 60% rating at the time of the U.S. Supreme Court’s Obergefell v. Hodges decision in 2015.

Gallup noted; “Since then, the issue has been less prominent in U.S. politics, and public support for same-sex marriage has continued to increase. Gallup has recorded other shifts in Americans’ ideas on marriage over time, historically, including expanded support for interracial marriage, which had 87% approval as of Gallup’s 2013 update.”

Republicans, who have consistently been the party group least in favor of same-sex marriage, show majority support in 2021 for the first time (55%). The latest increase in support among all Americans is driven largely by changes in Republicans’ views, Gallup reported.

Democrats have consistently been among the biggest supporters of legal same-sex marriage. The current 83% among Democrats is on par with the level of support Gallup has recorded over the past few years.

This could suggest that support for gay marriage has reached a ceiling for this group, at least for now. Meanwhile, support among political independents, now at 73%, is slightly higher than the 68% to 71% range recorded from 2017 to 2020.