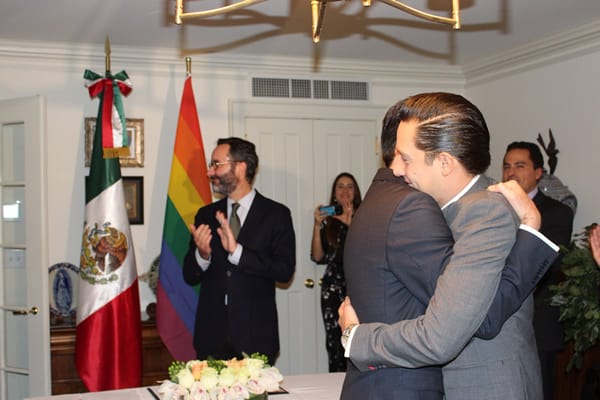 A same-sex couple from Mexico made history on Nov. 26 when they married in New York.

Mexican Consul General Diego Gómez Pickering officiated the wedding of Daniel Berezowsky and Jaime Chávez Alor that took place at Gómez’s official residence on Manhattan’s Upper East Side. Berezowsky and Chávez are the first same-sex couple from Mexico who were legally married outside the country to be recognized as married by the Mexican government.

“In his capacity as justice of the peace, the Mexican Consul General in New York, Ambassador Diego Gómez Pickering, joined the happy couple,” said the consulate in a press release. “He wished them success in their new stage (in life) while highlighting the relevance of the event, which paves the way for Mexican couples of the same sex who wish to legally join in marriage at an embassy or consulate of our country.”

New York City International Affairs Commissioner Penny Abeywardena is among those who attended the ceremony.

“On behalf of Mayor Bill de Blasio, I congratulate the newlyweds Daniel and Jaime on this special day that marks a milestone for global equality in New York City,” said Abeywardena in a statement.

Berezowsky and Chávez are originally from Mexico City. They moved to New York in 2016 in order to complete their master’s degrees.

Berezowsky told the Washington Blade during a telephone interview after his wedding that he and Chávez applied for a marriage license at the consulate on May 23, 2018. Berezowsky said the application was rejected, even though Gómez “was very supportive.”

“It’s been a bit of a long road,” Berezowsky told the Blade.

Same-sex couples can legally marry in Mexico City and several of Mexico’s 31 states, but the marriage rights for gays and lesbians are not guaranteed under the country’s federal code.

The Mexican Supreme Court in 2015 ruledlaws banning same-sex marriage were “indeed discriminatory.” The Mexican Supreme Court in 2014 struck down a law in Campeche state that banned same-sex couples from adopting children and ruledsame-sex spouses of those who receive benefits under the country’s social security system must receive the same benefits as their heterosexual counterparts.

“We’re very thrilled for both of us,” Berezowsky told the Blade as he discussed his marriage. “It was very important to have our marriage mean something not only to ourselves but the fight that a lot of couples have put in this fight for decades.”

Berezowsky noted to the Blade that marriage rights for same-sex couples was not a top issue for Mexican voters this year. Berezowsky added it was “important” for him and Chávez “to show through this case it is a matter of national relevance and should be something in the agenda of the Senate, the Mexican congress and the president.”

“The courageous action of this couple to press their case for marriage equality will make a meaningful difference for LGBT Mexican immigrants and their families living in New York City and elsewhere,” said Abeywardena in her statement. “As the proud host to the largest diplomatic community in the world and the birthplace of the modern movement for LGBT rights, New York City shows that our values of inclusion, equality and fairness represent the best of American values, today and always.”