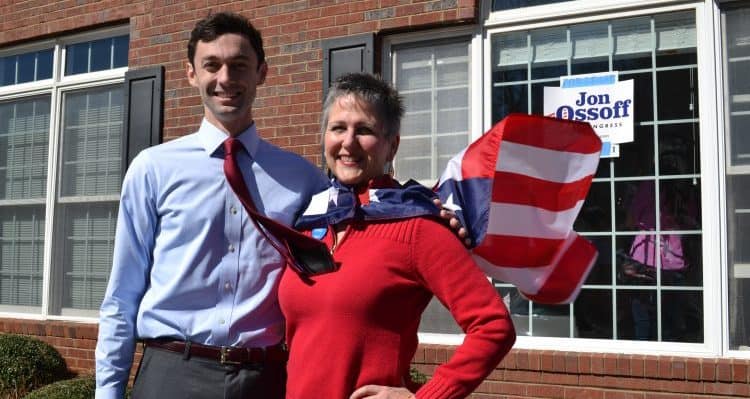 The battle is on for Georgia’s 6th Congressional District. Nineteen candidates threw their hats in the ring to take the House seat just vacated by new Health and Human Services Sec. Tom Price, who represented the region since 2005.

Democrats and progressives alike hope the time is ripe to turn the 6th blue. Efforts to “flip the 6th” include volunteer-led voter registration, neighborhood canvassing, and activists and private citizens alike opening their homes for meet-and-greets with candidates.

“I think this grassroots progressive movement has sort of bolstered the feeling that we’re not alone, that there are more Democrats and progressives and liberals. We must say there are Republicans who are our neighbors who did not vote for Trump. They did vote for Hillary, and we think those people are equally disturbed by the Trump agenda and want to send a clear message to Washington, DC, that we will not stand for this agenda of hatred,” said Louise Palmer, who monitors the Indivisible Georgia District 6 social media channels along with Amy Nosek. “Realistically, it’s still a bit of a long shot that we still might flip District 6, but as every day goes by and momentum gathers, it looks like it may be a very close race.”

Last fall, Palmer and Nosek helped flip Cobb County blue for the first time in about 40 years. Clinton won the county by 2 percent. Trump only won the entire 6th District by 1.5 percent.

“Forty-nine percent of the district voted for Hillary,” said Richard Keatley, a Democratic candidate from Tucker. “Why did they vote for Hillary? Was it because they couldn’t stomach the Republican candidate, or were they genuinely moving Democratic?”

There are five Democratic candidates who will test that question come April 18, the day of the special election. Including Keatley, who is a former Naval officer and a Georgia State University professor, Ragin Edwards, a technology company executive from East Cobb, feels now is the time to have a woman represent the 6th. Jon Ossoff’s had top-security clearance in Washington, DC, and uncovered government waste as part of his investigative filmmaking career — points he hopes will help draw conservative votes to his cause.

“We don’t have time to push a progressive agenda — right now we have to be resisting this agenda of hatred,” Palmer said.

Keatley, who’s worked with LGBT students over the years, said it’s a trying time to be any sort of minority.

“What we’re going to have to do is every time something like this occurs, is stand up on a box and decry that thing while working hard to try and … have a victory in another two or four or who knows how many years,” he said.

All Democratic candidates, save Quigg, explicitly stated in their talks with Georgia Voice or on their websites that they will stand up for LGBT rights at the federal level, if elected. The Republican, independent and Libertarian candidates were not so forthcoming with pro-LGBT issues on their platforms.

Getting out the vote

“The whole ‘flip the 6th’ or ‘turning that seat blue,’ is a movement to show that if you don’t listen to us, we will make sure somebody that does is in power,” Edwards said.

Because several of the candidates ran for political office before, their names may be more familiar to voters — especially on the Republican ticket. Palmer said those who want to turn 6 blue are actively involved in “get out the vote” efforts, and several candidates already put canvassers on the ground to distribute literature and make voters recognize their names and platforms come April 18.

“Most of those Republicans are going to vote for a Republican no matter what. Our efforts are in getting out the Democratic vote, period,” Palmer said.

In late February, Ossoff’s campaign — which raised about $2.8 million to date — kicked off a canvassing event with somewhere around 200 volunteers, knocking on doors for exactly that reason.

“This is a district with very well-informed voters who have proven that they judge candidates rather than voting for parties. I think we saw that in the outcome of the presidential election,” Ossoff said. “I don’t think it’s so much about the partisan identification of the representative as much as it’s important that it be represented by someone who will effectively represent the concerns of everyone in the district. I’ve never seen grassroots enthusiasm or efforts like this in my lifetime. It’s led by women. And it is powerful.”