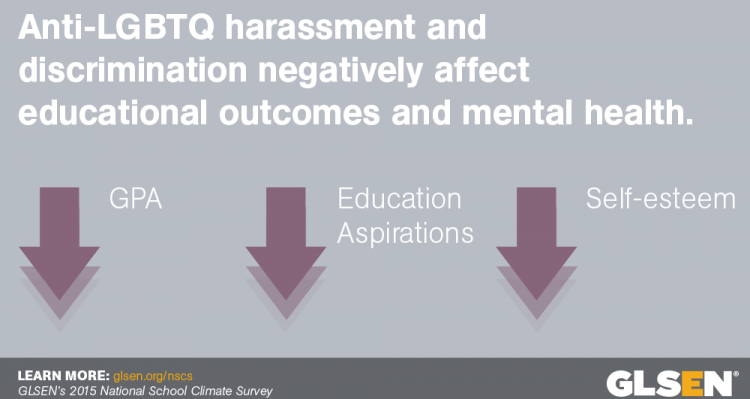 Schools are, ideally, a safe space to learn, meet new friends and expand the mind. That’s not necessarily the case for Georgia’s LGBT students, according to a report released today by national education organization GLSEN.

“Findings from the GLSEN 2015 National School Climate Survey demonstrate that Georgia schools were not safe for most lesbian, gay, bisexual, transgender and queer secondary school students,” the report says.

The snapshot for Peach State schools contradicts national trends shown in the survey. Though harassment of LGBT students is on the decline nationally, and inclusive climates on the rise, most Georgia students reported some kind of verbal harassment related to their sexual orientation, gender expression or gender. Some of these students even experienced physical assault based on these characteristics, data shows.

It’s not just the students in Georgia schools that cause concern. It’s the policies themselves, GLSEN finds.

“Nearly two in five LGBTQ students in Georgia were disciplined for public affection that does not result in similar action when it occurs between non-LGBTQ students,” the report shows.

Aside from PDA, LGBT students faced other discriminatory policies compared to heterosexual students. Twenty-four percent were prevented from bringing a same-gender date to a school dance, 22 percent couldn’t use a bathroom or locker room that aligned with their gender and 20 percent were even prevented from forming a Gay-Straight Alliance.

Only 3 percent of students surveyed said there was a comprehensive LGBT anti-bullying policy in their school.

GLSEN researchers looked at eight main factors regarding how LGBT students are treated at school: hearing biased remarks; feeling unsafe because of personal characteristics; missing school for safety reasons; experiencing harassment and assault; experiencing discriminatory policies and practices; how a hostile climate affects students’ academic achievement and mental health; instances of reporting and how adults handle reports; and how school experiences differ based on personal and community characteristics.

More than 10,500 students in all 50 states and Washington, DC, were surveyed to compile data. The students were in middle and high school, with ages ranging from 13 to 21.

GLSEN recommends Georgia schools establish anti-bullying policies and ensure personnel are aware of how to respectfully treat LGBT students. The organization also recommends including LGBT-inclusive clubs and resources to change the existing climate in many Peach State schools.

“Students attending schools with these resources and supports report more positive school experiences, including lower victimization and absenteeism and higher academic achievement,” the report says. “Given the high percentages of LGBTQ students in Georgia who experience harassment at school and the limited access to key resources and supports that can have a positive effect on their school experiences, it is critical that Georgia school leaders, education policymakers and other individuals who are obligated to provide safe learning environments for all students [take these steps]. … These actions can move us toward a future in which al students in Georgia will have the opportunity to learn and succeed in school, regardless of sexual orientation, gender identity or gender expression.”