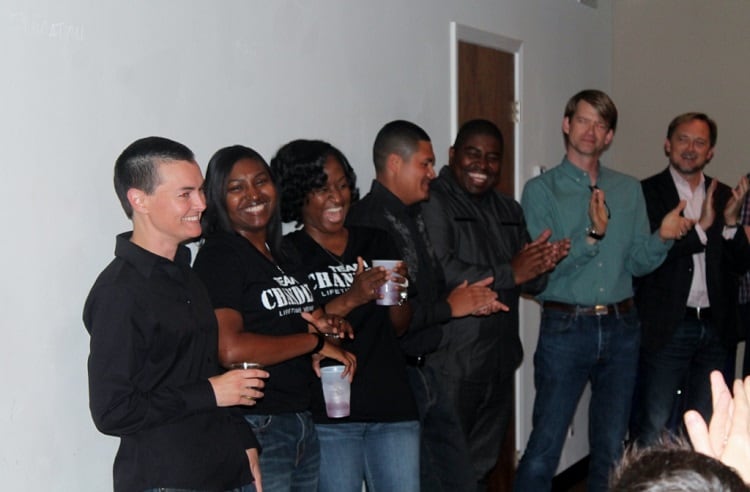 There is perhaps no greater development in Georgia LGBT history than the filing of Inniss v. Aderhold, the federal class action lawsuit that’s attempting to strike down Georgia’s 2004 same-sex marriage ban. There’s not going to be a quick “Law & Order”-style conclusion to the case, but we’re at a point where many briefs have just been filed and it will likely be September before we have another development.

So let’s take a step back and assess the case, figure out where we are in the process and what people can do in the meantime to help.

WHO ARE THE PLAINTIFFS?

WHO ARE THE DEFENDANTS? 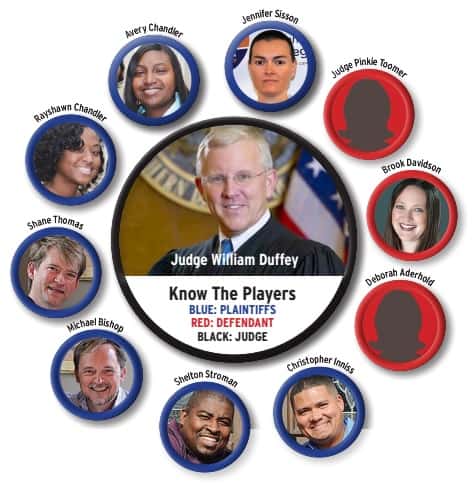 WHY ARE THOSE THREE BEING SUED?

Aderhold, the state registrar, is being sued for denying an amendment to Drenner’s death certificate recognizing her as legally married to Sisson in another state. Davidson and Toomer, the Gwinnett County Probate Court clerk and Fulton County Probate Court judge, respectively, are being sued in their official capacities for denying marriage licenses to the gay plaintiffs seeking them, therefore denying them their constitutional rights, the suit states.

WHO ARE THE LAW FIRMS DEFENDING THE PLAINTIFFS?

WHO IS THE JUDGE AND WHAT SHOULD I KNOW ABOUT HIM?

Judge William S. Duffey Jr. was randomly assigned to Inniss v. Aderhold, per court procedure. Duffey was a deputy to independent counsel Kenneth Starr in the Whitewater investigation, which looked into the real estate investments of Bill and Hillary Clinton and their associates. He then served as campaign finance chairman to President George W. Bush before appointment to the bench by him.

That might dishearten those worried about Judge Duffey’s political affiliations, but the legal experts the GA Voice interviewed about the issue were not concerned. Alex Reed, an assistant law professor at the University of Georgia and an expert on same-sex marriage rulings, said “I think it’s easy to look at who they’re appointed by or what careers they had prior to being a judge and predict how they might rule,” he says. “But I’ve been skeptical of a lot of that, particularly around the issue of same-sex marriage.”

WHAT DO THE LEGAL EXPERTS THINK OF THE STRENGTH OF THE CASE?

All of the constitutional law experts the GA Voice spoke to for insight on the suit sang the praises of the legal team and the plaintiffs, with expert and HRC Atlanta co-chair Anthony Kreis calling it “a masterful piece of legal strategy.”

Reed points out the teams’ inclusion of plaintiffs with children and plaintiffs who are police officers or who have served in the armed forces, saying it humanizes the legal issue for those who don’t know someone who is gay or lesbian.

As expected, Georgia Attorney General Sam Olens, a Republican, announced that his office would defend the state’s 2004 same-sex marriage ban. The announcement was made via a brief Olens’ office filed July 21, which was a motion to dismiss on behalf of defendant Debbie Aderhold, the state registrar.

Hillel Levin, an associate law professor at the University of Georgia and an expert on same-sex marriage rulings, says, “Unsurprisingly, these are the exact same arguments that have been rejected time after time by other courts around the country over the past year.”

HOW DID THE OTHER TWO DEFENDANTS RESPOND TO THE LAWSUIT?

Attorneys for the other two defendants, Davidson and Toomer, filed briefs later the same day Olens did. The lawyer for Davidson argues that the defendant has to follow the letter of the law in her duties.

The majority of Judge Toomer’s response is boilerplate and does not contain any constitutional bombshells, mostly stating that as a judicial officer she is required to comply with state laws and the Georgia Constitution and that this role also grants her “absolute judicial immunity” to such claims.

SO WHAT HAPPENS NEXT?

In a July 25 court filing, Judge Duffey granted the plaintiffs an extension of time to respond to Aderhold’s motion to dismiss (i.e. the Olens brief), and they now have until September 5 to do so. So the ball is back in Lambda Legal and the rest of the plaintiffs’ team’s court. Then Attorney General Olens has the right to file a reply brief.

WHAT CAN I DO IN THE MEANTIME?

The GA Voice has not made any official endorsements for this November’s elections, but for those who want to put the people in office who can make the largest impact in striking down Georgia’s same-sex marriage ban, they would do well to know who Greg Hecht is.

Hecht, the Democratic nominee for Georgia Attorney General who will face Olens in November, has announced his support for same-sex marriage and confirmed that if elected, he would not defend the ban.

So if Hecht should win, and the case is still going on when he takes office, he would be in a position to drop the state’s defense in Inniss v. Aderhold. Hecht’s stance on the issue is sure to make him a major draw for the LGBT community and the more progressive blocs of Georgia voters as they head to the polls in November.

Also, Georgia Equality, the state’s largest LGBT political and advocacy group, continues to monitor the situation and is always in need of volunteers.