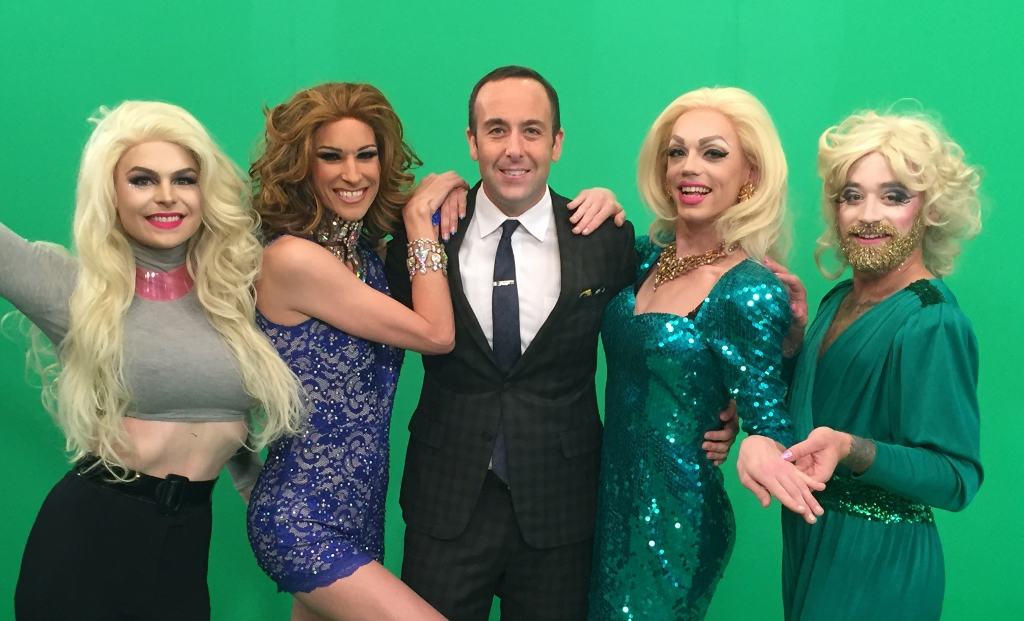 There will be a familiar presence on the Atlanta Pride parade route this year, as local TV news station 11Alive airs a live stream of the parade for the fourth year in a row with a beefed up team of anchors, reporters and more, plus a float in the parade. It will be the largest presence the station has ever had at Pride, continuing a trend of devoting more and more coverage to issues concerning Atlanta’s LGBT community throughout the year.

This year’s three-hour live stream will be hosted by reporter and anchor Blayne Alexander and “Atlanta & Company” host Christine Pullara, who will be stationed at a booth on the parade route on Peachtree Street along with openly gay reporter Jeremy Campbell.

It’s a breath of fresh air for Campbell, who says, “As a journalist it makes me excited to come to work every day because I’ve worked at stations where that’s not the case and this community is considered a fringe community. Like, ‘We’ll put an article on the web but that wouldn’t be something worthy of covering on television.’”

The station has kept a steady stream of LGBT stories on the air and online, from breaking news stories like the U.S. Supreme Court striking down same-sex marriage bans across the country in June, to more personal stories, such as that of Ashley Diamond, the transgender Georgia inmate who alleges she was sexually assaulted and denied hormone therapy treatment while in prison. The station followed Diamond’s saga throughout the past year, with Campbell scoring a coup by getting the first on-air interview with Diamond following her release from prison in August.

11Alive station operations manager Tim Thomas is quick to respond when asked what led the station to cover the parade live that first year in 2012, comparing it to their coverage of other community events like the Peachtree Road Race.

“These are things that tie us to the community and there’s no way whether it’s gay or straight that we should not cover it,” he says.

Campbell agrees, saying, “It has to be just to be a modern, relevant TV station. The LGBT community is such a big part of the population of Atlanta.”

But this year’s coverage of Pride will look completely unlike the station’s first crack at it three years ago.

“It was simply a laptop, a camera and somebody down there just talking about it,” Thomas says. “And as anything in its infant stage, we were like, ‘We’ve gotta do this better.’”

They added more camera people each year and made the Pride coverage a building-wide project involving more of the newsroom and engineering department. Joining Alexander, Pullara and Campbell this year will be color commentator (and 2014 Atlanta Pride grand marshal) Tony Kearney, as well as TV and radio personality Conn Jackson.

“[Jackson] does a great job of jumping on and off floats and he’s just crazy enough to do it, so we let him do it,” Thomas says, laughing.

There will also be produced pieces dropped into the coverage throughout the day, spotlighting a variety of issues, including an update on same-sex marriage in Georgia (featuring an interview with Georgia Voice Editor Darian Aaron), a look at transgender life in Atlanta and a more lighthearted piece on the city’s drag queens.

“With Violet Chachki winning ‘RuPaul’s Drag Race,’ I thought it was a great opportunity to declare Atlanta ‘The Drag Queen Capital of the World,’” Campbell says, adding, “I quickly learned if you’re going to do a story about drag queens, you can’t just include a few. You have to be equal opportunity. I learned that the hard way [laughs]. I started getting emails and Twitter messages, so I’m daunted with the task of jam-packing the story with all of the Atlanta drag queens that I can.”

“They’ve kind of kept us grounded because it’s easy in news to go with the news cycle, so we’ve got some great stories there,” he says.

And the interest in Pride coverage doesn’t end after the finale of the Starlight Cabaret on Sunday night. The station personnel say their Pride web page sees heavy traffic throughout the year as people come back to view photos and video from the weekend.

“That’s the perfect recipe, when you have the station doing this and then the feedback comes in from the community that, ‘Yes, we want to see this, we’re glad you’re doing it,’” Campbell says. “That’s how something becomes bigger and how we’ve gotten to where we are this year.”

Both Campbell and Thomas say it all goes back to that slogan you frequently hear if you’re a regular consumer of 11Alive’s coverage: “Holding the powerful accountable.”

“The station mantra falls into that and if there’s inequality about something, that type of story will get the attention of 11Alive,” Campbell says. “It’s a natural fit.”