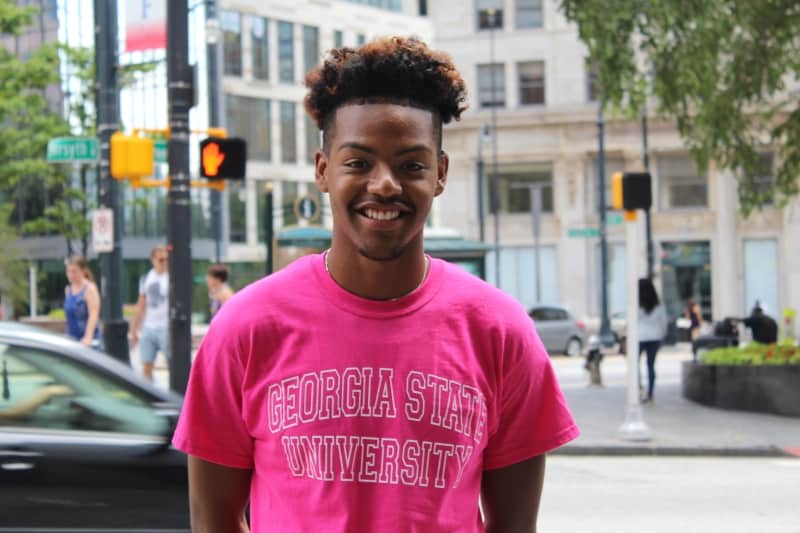 Tarek (pronounced ta-REEK) Ellis was the new kid when he arrived at Friendly High School in Fort Washington, Maryland in 2014. The openly gay junior noticed something wrong right away.

“I noticed how the LGBT community was being treated in the school,” he tells the Georgia Voice. “We had a transgender teacher who was misgendered a lot, we had students that people made jokes about. I heard the word ‘faggot’ all the time.”

He wanted to do something about it, but instead of going the common route and trying to change the attitudes and behavior of the offenders, he instead wanted to give the victims the confidence and the communication skills they needed in order to overcome such incidents and grow into more self-assured people.

So, after proposing his idea for an LGBT student empowerment club to the principal, and after getting the all-clear once he lined up a teacher to sponsor it (“It was perfect. A gay black man and a white transgender woman. It was amazing.”), Caring Colors was born. They expected five or six students at the first meeting but 20 to 30 showed up instead, hungry to study together, talk about issues at school and at home, work on confidence and public speaking and more.

He later applied for and became the LGBT liaison for Prince George’s County so he could create Now Ellis wants to replicate the model here. So he’s planning an LGBT empowerment conference called The Next Step Conference scheduled to occur in late spring/early summer 2017. And if you haven’t already received a phone call or an email from the laser-focused Georgia State freshman about it, you more than likely soon will.

Coming out and moving forward

The Tarek Ellis you see now is not the same one you saw early on in his freshman year of high school. Something changed though after he came out as gay that year.

“When I came out, I felt like ‘Look, this is my biggest secret, and you can’t tell me anything.’ My grades got better, I got more confident. I found out who I really was for the first time in my whole life, and that’s the best feeling,” he says.

He says bullies would never target him because of the confidence with which he carried himself, but of course not all youths have the same experience after coming out. So Caring Colors became a way for him to help the victims get the same confidence he had.

Ellis eventually did an internship at the National Institutes for Health, became a Point Scholar, got an invite to attend the White House Summit on African-American LGBTQ Youth in June, and nabbed a scholarship to Georgia State.

Students were worried that once he left for Atlanta that Caring Colors would fall apart, so Ellis created an executive board of students that would help schools learn how to start gay-straight alliances and Caring Colors chapters at their schools so the mission would carry on.

“I moved and I wasn’t going to let them have all the fun in Maryland, so I was like, ‘How can I make this bigger and better,’” Ellis says. “I knew I was moving to Atlanta so I said, ‘I want to help the community that I’m in because this is my new home.’” Enter the Next Step Conference.

Getting to know Atlanta

Ellis has been busy making contacts in and learning about Atlanta’s LGBT community, and is in the process of forming a planning committee, which already has six members, including Georgia State University Professor Eric Wright and Point Foundation board member Louis Gary.

One common thing he’s heard is that many young LGBT people move to Atlanta to escape the oppression they experienced at home, but they don’t have many plans or goals once they get here—they just want out. He says the Next Step Conference will provide them with the resources they need, connect them with scholarship opportunities and colleges looking for applicants, as well as companies that are hiring. He envisions financial workshops to teach people how to handle their money.

“Tarek is an example of the spirit of a Point Foundation Scholar,” Gary says. “A key quality in the selection of scholars are individuals whom have actively pursued leadership roles in LGBTQ causes in addition to their scholatic achievements. We are exited that Tarek has chosen to make his impact from Atlanta.”

Ellis met Pride School executive director Christian Zsilavetz at the White House conference in June, and he has similar sentiments.

“Tarek is amazing and confident and believes in justice for LGBT [people],” Zsilavetz says.

Find out more about Caring Colors and The Next Step conference at www.caringcolors.org.