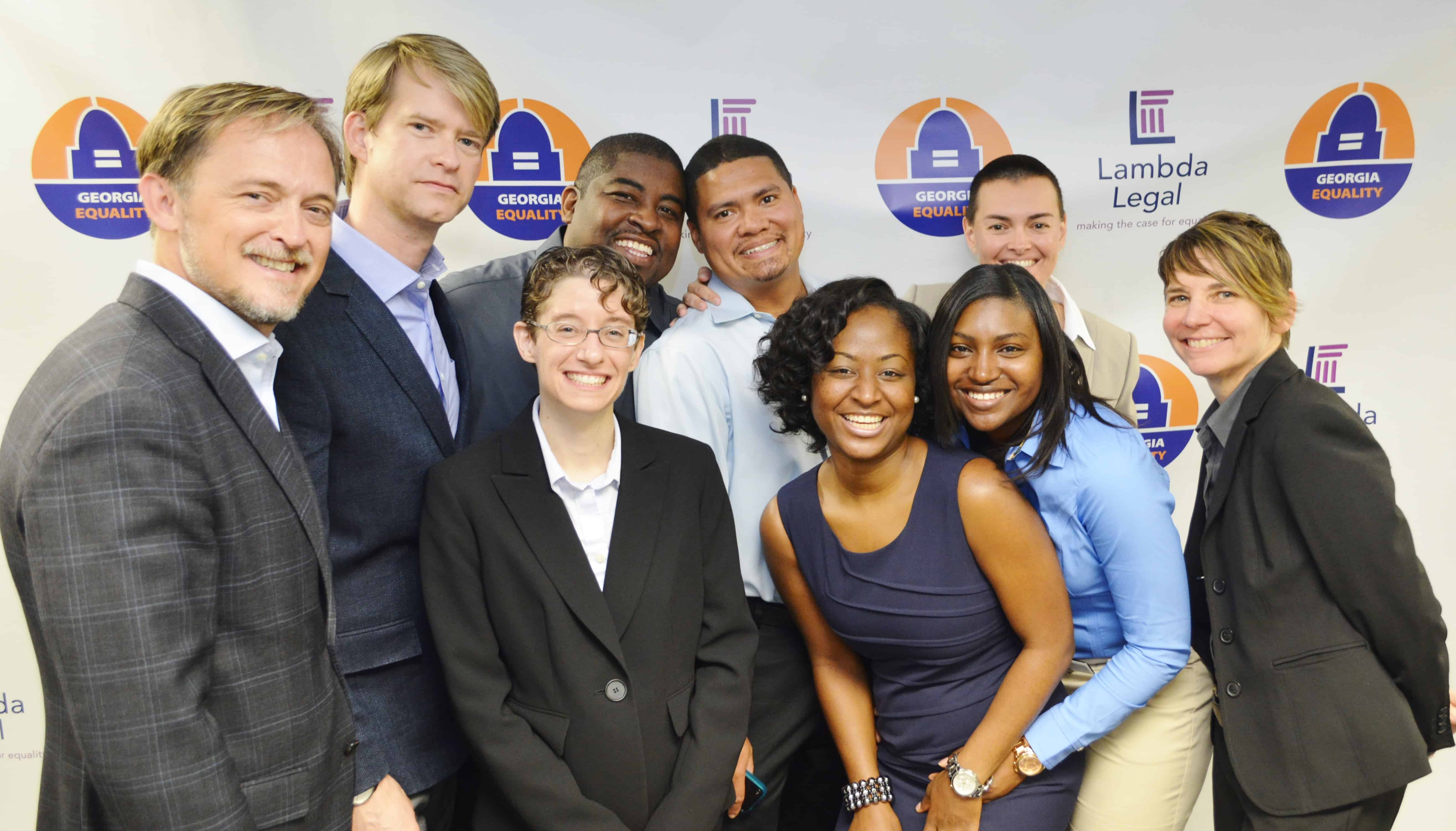 2014 People of the Year: The Georgia gay marriage plaintiffs

One day in November 2004, nine men and women were going about their lives like it was any other day when they heard the news that 76 percent of their friends and neighbors had a message for them—marriage isn’t for you.

They couldn’t have known then what role they would eventually play in attempting to reverse that day’s events. But they would.

This year, they came together. A veterinarian. A flight attendant. A lawyer. A teacher. A pet resort manager. A police officer. An engineer. A Realtor. A professor.

They came to step up and be the plaintiffs in the federal lawsuit challenging Georgia’s 2004 same-sex marriage ban, and they’re GA Voice’s 2014 People of the Year.

We talked to local legal experts about why the plaintiffs are the right people to help lead Georgia into becoming a state that recognizes same-sex marriage.

‘They present a powerful story’

Merritt McAlister, senior associate with King & Spalding, is a former law clerk to both Judge R. Lanier Anderson III of the 11th Circuit Court of Appeals and former U.S. Supreme Court Justice John Paul Stevens. The plaintiffs in this lawsuit are excellent choices because of the variety of stories they represent, she says.

“The Inniss plaintiffs reflect the richness and fullness of our community, and their stories underscore the variety of ways in which not being able to marry in Georgia imposes real costs on our lives,” McAllister says.

“Some of the plaintiffs have been married in other states, yet will be denied basic benefits in Georgia that their marriage would receive elsewhere. Others need the protection of marriage to secure adoption rights, health coverage for their families, and spousal benefits. Collectively, they present a powerful story,” she adds.

And, as importantly, they present powerful stories to which courts can relate. Their stories will resonate with judges who have shared similar experiences—the loss of a partner, creating a family, the risk of losing a loved one in the line of duty, McAllister says.

“We’ve seen how important it is for judges to understand that LGBT families are exactly like their own—especially when it comes to protecting the interests of children raised in LGBT families. Arguments focusing on families, children, and the real emotional costs, not just the obvious financial ones, of not being able to marry seem to have resonated well with the courts—even conservative judges.”

‘They deserve to be hailed as the heroes that they are’

“The Inniss plaintiffs are fighting for equality under the law, nothing more,” he says.

“Parents who want respect for their children, a widow told by the state her relationship with her life partner had no legal status, police officers bravely challenging a system they are sworn to uphold,” he adds. “For their courage and convictions, and for standing up not only for themselves but for countless others, they deserve to be hailed as the heroes that they are.”

‘Truly a reflection of the fabric of Georgia society’

Tara Borelli, senior attorney at the Southern Regional Office of Lambda Legal, the LGBT legal group that filed the case and is representing the plaintiffs, says she is inspired by the plaintiffs and their willingness to put their lives in the public eye in the fight for everyone’s equality.

“I have been so inspired to get to know these brave individuals and their families. They are truly a reflection of the fabric of Georgia society. They include teachers, business owners, and a police officer and deployed reservist serving in the Middle East,” Borelli says.

“Many are devoted parents. One of them nursed her beloved spouse through a final fight with terminal illness. It has been such a joy to get to know our plaintiffs, whose stories are truly inspiring. They are a reflection of our best selves, and Lambda Legal is honored to represent them,” she says.

Being honored as the GA Voice’s People of the Year is an honor they deserve, Borelli adds.

“We are so pleased that the GA Voice is recognizing their contribution to our movement. Stepping into the spotlight to bring a case like this is not easy. It takes stamina, fortitude, and dedication,” she explains.

“The plaintiffs devoted countless hours to working with the lawyers as we prepared their complaint. They have bravely subjected themselves to public scrutiny as part of the important work of telling our stories to change hearts and minds. This takes moral courage, and they have done all of it with such grace.”

• Christopher Inniss, 39, and Shelton Stroman, 42, of Snellville, have been together for 13 years. They adopted a child and because the fathers have different last names, there is often confusion with teachers and physicians. When Stroman tried to legally change his last name, he was “berated” in court by the judge for wanting to share the last name of another man, the lawsuit states.

• Rayshawn Chandler, 29, and Avery Chandler, 30, of Jonesboro. Rayshawn is a flight attendant with Delta Air Lines and Avery is a police officer for the Atlanta Police Department and a member of the U.S. Army Reserve. The two legally married in Connecticut on June 26, 2013, and they are planning to have children. The State of Georgia’s refusal to recognize their marriage means one of them might not be recognized on the birth certificate of their children, and Rayshawn won’t be recognized as her spouse if Avery gets killed in the line of duty.

• Michael Bishop, 50, and Shane Thomas, 44, of Midtown Atlanta, have been together for eight years. Michael, a lawyer, and Shane, a Realtor, have two young children. They worry about the sense of inferiority or uncertainty their children will carry because their parents can’t get married. They filed for a marriage license in Fulton County Probate Court on April 10 and were denied.

• Jennifer Sisson, 34, of Decatur, whose wife, Pamela Drenner, 49, died after a long battle with ovarian cancer on March 1. The couple legally married in New York on Feb. 14, 2013. When Sisson went to make funeral arrangements in Georgia, she was told, under Georgia law, she could choose as Drenner’s marital status only “never married,” “widowed,” or “divorced.” The death certificate eventually read “never married,” causing tremendous pain to Sisson.

• Beth Wurz, 41, and Krista Wurz, 39, of Brunswick, married in October 2010 in New Hampshire and have seven children, including five placed with them through foster care. Beth is an English professor and Krista is an Air Force veteran and special education teacher. Since Georgia doesn’t recognize their marriage, Krista and some of the children are denied health coverage through Beth’s job and they have been denied the ability to adopt their children jointly.

HOW WE CHOSE OUR PEOPLE OF THE YEAR

In our last issue of 2014, GA Voice names our fifth annual Person (or People) of the Year. This year we selected the plaintiffs in the federal lawsuit seeking to overturn Georgia’s same-sex marriage ban.

While each of the plaintiffs will tell you they are not activists, we believe that living an honest life is perhaps the most important role of any activist.

We applaud, and thank, the plaintiffs and their families for speaking out for all of us, and working to right the wrong that Georgia voters made into law in 2004 that prohibits same-sex couples from marrying. As states across the nation continue to join those that affirm marriage equality, we can only hope Georgia will one day soon be counted among them. When that happens, it will be thanks in no small part to the Inniss plaintiffs.

PAST GA VOICE PERSON OF THE YEAR HONOREES

2013 — Ria Pell, beloved restaurateur, chef, and activist. She died Nov. 24 and was honored posthumously
2012 — The Atlanta Sisters of Perpetual Indulgence
2011 — Vandy Beth Glenn, who won a landmark court ruling after she was fired for being transgender
2010 — Atlanta Eagle attorney Dan Grossman, who represented the plaintiffs suing over the unconstitutional 2009 police raid