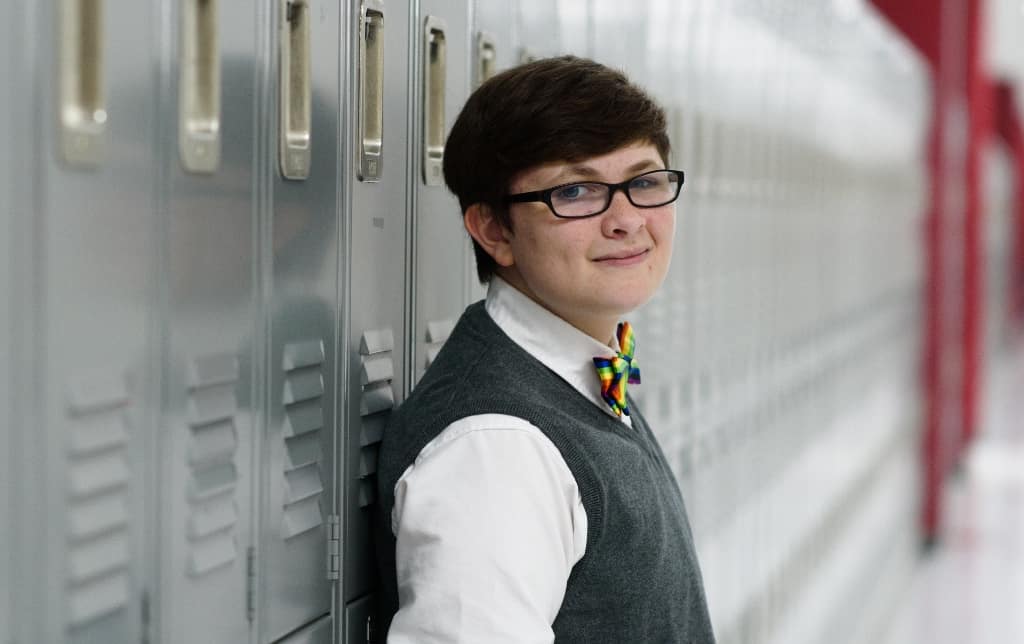 As LGBT people across the state came down from the late-June high of the U.S. Supreme Court decision on marriage equality, little did they know there was a fight brewing in South Georgia that would give a peek into what the future of the movement will look like post-marriage.

The controversy was about the proposed formation of a Gay-Straight Alliance (GSA) at Berrien High School in tiny Nashville, Georgia. The incident pitted students against students and parents against parents, with a group of faith leaders spreading a petition across town to stop the formation of the club and a school board under fire and facing legal action if it didn’t follow federal law.

Standing tall in the middle of the fracas—all 5-foot-3-inches of them—was Mars Hallman. The now 17-year-old Berrien High student, who recently came out as nonbinary and prefers they/them/their pronouns, led the charge for creating the GSA after being fed up with the way they and their LGBT friends were being treated by fellow students.

It’s hard to imagine there could be such an uproar over the 10 or so students who have been meeting this fall as part of Berrien High School’s new GSA.

“We’ve had a lot of very good discussions about how it’s okay to be yourself and we’ve mostly just been having fun,” Hallman tells Georgia Voice.

The GSA just presented a check to a local animal shelter. Next semester they’re teaming up with other GSAs to do park cleanups.

It was a long way to get to this point since the day Hallman arrived home from school in spring, tired of hearing the words “faggot,” “queer” and “dyke” ring out in derision throughout the halls of Berrien High. Instead of wilting, they sprang into action, looked online and discovered GSAs.

They researched what was needed to start one at their school, reviewed school system policy and looked up federal laws. They lined up a club sponsor and presented everything to their school principal, who gave them a “maybe” but later came back and turned them down.

Undeterred, Hallman called a meeting with the principal and the school superintendent and cited the Federal Equal Access Act, which requires that federally funded public schools provide equal access to extracurricular clubs. That did the trick.

The school board approved the club in May, but local faith leaders circulated a petition against it, gathering 1,300 signatures. One pastor read the petition at the June school board meeting, but the board held firm, nudged along by a strongly worded letter from the ACLU. Georgia Voice broke Hallman’s story in early July when there was one school board meeting to go and one final shot for opponents of the GSA to fight its creation before school started in August. The club stayed.

Looking back on that tumultuous time, Hallman says, “There was a lot of mixed and highly emotional reactions, some of it very personal. I think that for every person who signed a petition against my actions or who had a prayer rally against me and students like me, there were two more people who would send messages of support.”

Hallman’s story captured the attention of the Gay, Lesbian & Straight Education Network (GLSEN), which honored them as the national Student Advocate of the Year at the group’s 2015 Respect Awards in October.

“It was a bit mind-blowing to know that the people around me that I hero worship turn around and tell me that I was a hero,” Hallman says of the night. “It was a redirection of energies that I never expected.”

But while hanging with celebrities stood out, Hallman’s favorite part was eating dinner with who they call “the real celebrities for me,” the National Youth Council for GLSEN.

“They were just these nine kids like me who stood up for themselves and LGBT communities in their towns,” they recall. “They’re from all over the place and they’re like me, they’re my age. I have friends who are activists!”

The next fight and beyond

But the work continues for Hallman and other LGBT students at Berrien, who say that anti-LGBT incidents continue at the school, with one difference from before the GSA began meeting.

“The students who are out, or even the students who aren’t out, are a lot more comfortable reporting the incidents and getting help now that they know there’s already a conversation started,” the now-senior says.

Next up on the GSA’s agenda is adding gender expression to Berrien’s anti-bullying policy and adding a gender-neutral restroom. They’re working up a game-plan for that and will present the proposals to Berrien Principal Angie Lovein when school gets back in session in January. The proposals, just like the one for the GSA’s creation, will then likely go before the school board for a vote.

But the GSA fight wasn’t the only significant event for Hallman this year. Shortly after the club was approved, they came out as nonbinary. It would have happened sooner, but Hallman says they held back out of fear that it would hurt the chances of the club’s creation.

It made them realize something the 17-year-old will take with them to UGA, Emory, the University of Pennsylvania, Princeton or one of the other schools they applied to when they leave for college next fall.

“I maintained the label of lesbian to try to make the transition of adding a GSA to my community easier for myself and for other people around me,” Hallman says, “and I realized that I don’t have to sacrifice myself to wait around for other people to catch up to me.”