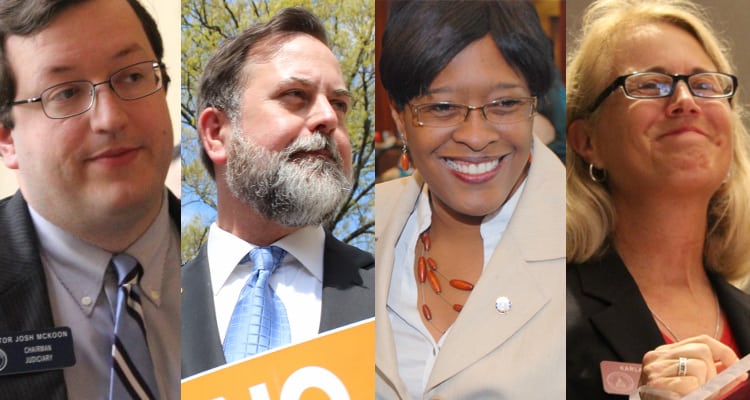 Hold onto your hats, folks. A perfect storm has brewed for this legislative session, featuring round three of a so-called “religious freedom” bill, a backlash to the U.S. Supreme Court decision to legalize same-sex marriage, and the “SEC Primary” on March 1, when Georgia and six other Southern states hold Democratic and Republican presidential primaries.

The new primary is the brainchild of Georgia Secretary of State Brian Kemp, who by moving up the primary date makes Georgia a bigger player in the 2016 presidential race. So expect a herd of GOP candidates visiting the Peach State as the date approaches, with religious freedom and marriage equality on the tips of their tongues and ready to make headlines.

It’s also an election year for state legislators with qualifying occurring in March and primaries in May, so expect a shorter session since legislators are not allowed to raise money while in session and they’ll need to get back to their districts to campaign. We’re hearing that legislators are targeting an adjournment date of mid-March, a huge time crunch considering the last session didn’t end until the first week of April.

“Every single legislative session has its own unique challenges,” says Georgia Equality Executive Director Jeff Graham. “We’ve got a lot of unique challenges this coming year that frankly we’ve never seen before.”

Already comes word that a state version of the First Amendment Defense Act will soon be introduced, and on Jan. 13, state Rep. Kevin Tanner (R-Dawsonville) introduced a pair of bills affecting the LGBT community—one a Pastor’s Protection Act that will ensure that no faith leader is required to perform same-sex weddings (a protection they already have under state law), and another more controversial one that would allow business owners to refuse service to same-sex couples.

The return of RFRA

A major concern of LGBT activists this session is the third go-round of a so-called “religious freedom” bill, modeled in part on the federal Religious Freedom and Restoration Act (RFRA).

Last we heard of Sen. Josh McKoon’s (R-Columbus) Senate Bill 129, it had stalled in the House Judiciary Committee in March after former Rep. Mike Jacobs (R-Brookhaven) introduced an anti-discrimination amendment to the bill. The amendment passed, the bill’s supporters tabled it and that’s where it remains, waiting to be addressed again when the next session starts in January.

Opponents of the bill have latched onto statements by supporters that an anti-discrimination clause would “gut” it.

“In the last public comments they made it clear that what we had been saying all along is really true, that they were looking to find a vehicle to specifically be able to deny services to the LGBT community,” Graham says.

However, McKoon claims that the Jacobs amendment was not an anti-discrimination amendment.

“The Jacobs amendment and the debate around it, it was obviously a poison pill amendment designed to make the bill meaningless so that the bill cannot move forward,” he tells Georgia Voice.

Both the Georgia Chamber of Commerce and Metro Atlanta Chamber of Commerce have voiced their support for a RFRA bill only if it includes anti-discrimination language, and both the Metro Atlanta Chamber and the Atlanta Convention and Visitors Bureau (ACVB) published studies showing an economic hit in the billions should the legislature adopt a bill without it. However, McKoon has been critical of the studies, saying the questions were loaded and comparisons to a similar bill in Indiana were inaccurate.

Critics of McKoon cite the fact that he’s in an election year—might he be spearheading legislation like RFRA for the third straight year and another bill that would make English the official language of Georgia (even though it already is) in order to fire up his base in advance of this November?

McKoon calls such notions “laughable,” saying there is a “sustained assault on religious freedom that’s been going on in our state for years and years” and notes how the criticism is personal to him.

“Let me tell you what, I would have much rather not had the last six months of my mother’s life her reading in the newspaper about her son being a bigot and her son hating people. It was pretty unpleasant,” he says.

Sen. Vincent Fort (D-Atlanta), lesbian Rep. Keisha Waites (D-Atlanta) and Shelley Rose, Associate Director of the Anti-Defamation League, confirmed that the defeat of RFRA would be a major focus of theirs. But there will be one less LGBT voice under the Gold Dome to fight it this year after the resignation of lesbian Rep. Simone Bell (D-Atlanta).

“Her loss will be huge and we will feel that,” says Waites. “She was very active and vocal during the conversation and debate during RFRA. So Rep. Drenner and I will have to step up in an extraordinary way.”

Georgia Equality beefed up the presence of faith leaders in opposition to the bill in last year’s session, a strategy Graham says they will continue to use during this session. The group is also in talks with former Georgia Attorney General Mike Bowers about returning to provide additional legal analysis as he did last session.

Hate crimes legislation is back

Georgia is one of only five states without hate crimes legislation, a fact that led the Anti-Defamation League to announce a 50 States Against Hate Campaign to get that number down to zero. But don’t expect Georgia to come off that list this session, says ADL’s Rose.

“I think to get something passed this year would be very optimistic,” she tells Georgia Voice. “But the plan is on getting something introduced, get a hearing and begin conversation around that now with the legislators.”

Georgia Equality is spread thin with the RFRA fight, but it will be working closely with ADL on the campaign. However, Graham shares a similar outlook with Rose on legislation passing in 2016.

“Unfortunately, since there’s no Republican support for it and we haven’t been able to get any hearings on it, I think we may need to start a bit from scratch on hate crimes,” Graham says.

However, Sen. Fort confirms he will take up Senate Bill 47 again, a hate crimes bill that includes sexual orientation and gender identity. He also says he is meeting with fellow members of the Georgia Legislative Black Caucus to make a final decision on which HIV/AIDS legislation they will tackle during the next session. The group introduced 10 policy recommendations on World AIDS Day and will work from that list to decide.

In the meantime, the major bit of offense LGBT leaders will be playing involves lesbian Rep. Karla Drenner’s (D-Avondale Estates) Fair Employment Practices Act, which would prohibit discrimination against state employees on the basis of sexual orientation and gender identity. This will be the fourth go-round for FEPA, which failed to pass in the last session despite having 77 co-sponsors, including 17 Republicans and 1 Independent. Rep. Drenner was unavailable for comment.

Graham confirms Georgia Equality will be actively involved in helping to pass the bill, which he says will help them read the tea leaves as to the future of hate crimes legislation.

“If we see advancement on FEPA, that really is I think Republicans starting to test the waters to see if they can really support [hate crimes legislation] without ruining their political career,” he says.

But don’t expect much more than that as far as pro-LGBT legislation this session.

“I don’t think we will end up with any other piece of broader civil rights legislation that we’ll see introduced this year,” Graham says.

On Dec. 11, Rep. Waites pre-filed House Bill 716, which would outlaw so-called gay “conversion therapy” for people under the age of 18. The practice has been debunked and deemed harmful by most major medical, psychiatric and psychological organizations. However, the odds are long on the bill getting much traction.

“Unfortunately it’s a very partisan environment down there so it’s very difficult to get anything done as a Democrat, specifically being a junior member,” Waites says.

Georgia Equality’s Graham adds, “It’s not one of the things that we’re actively speaking on now. Not that it’s not an important issue but we have a pretty hefty list, both defense and offense, that we’re working with right now. There’s always going to be more need and a desire for more legislation than what we can realistically and feasibly take on.”

Waites also says she is working on language for and will re-introduce an anti-bullying bill that will include sexual orientation and gender identity.

And it’s unclear at this point if there will be any additional legislation filed as a backlash to June’s marriage equality decision, but LGBT activists and politicians are at the ready should any legislators attempt to make other attempts to make it “marriage light” for same-sex couples in Georgia.