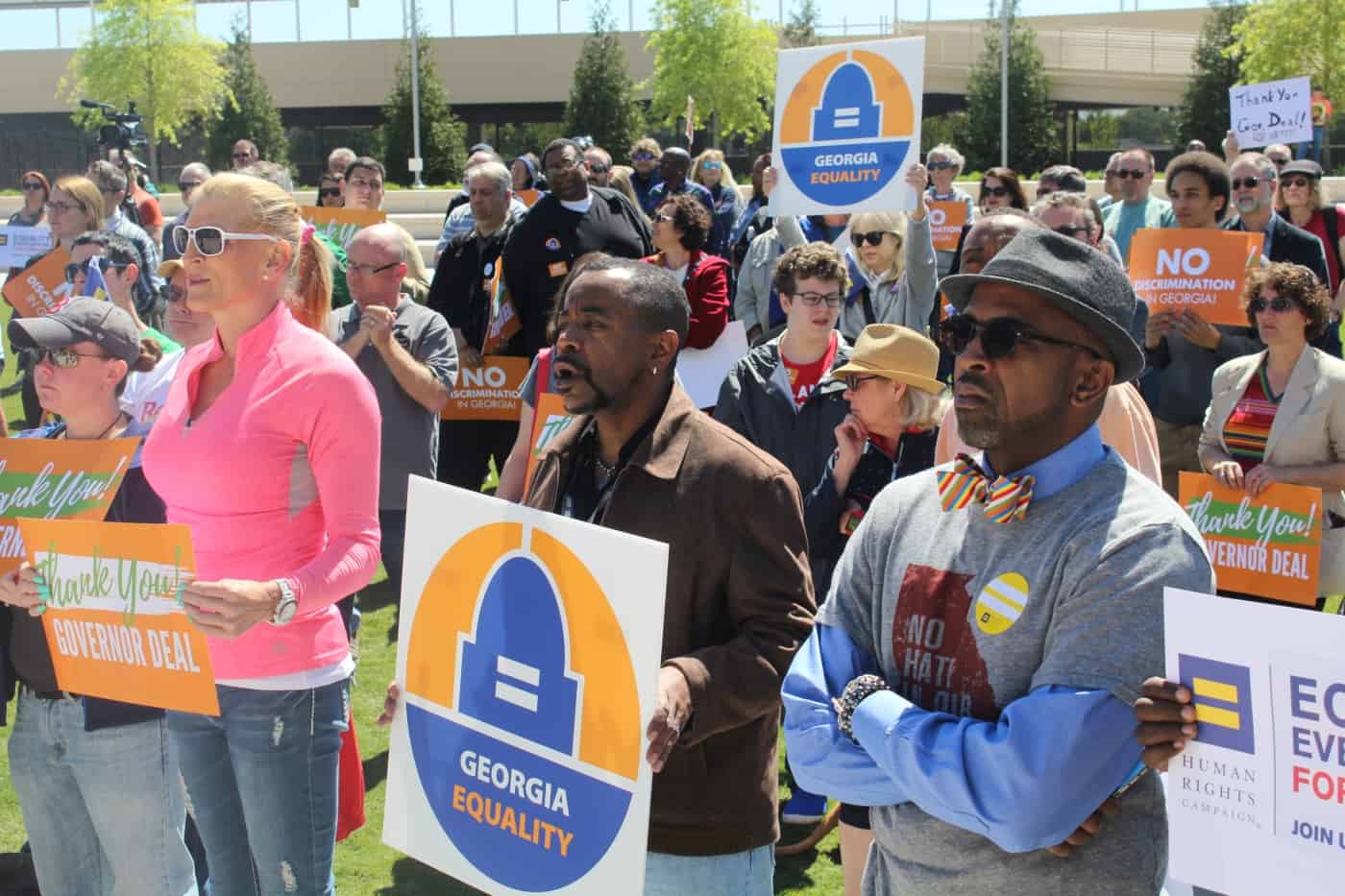 Following the resignation of Rep. Simone Bell in November 2015, there was concern about the falling number of LGBT voices in the state Legislature. But the community could rest a little easier after January’s special election to fill the seat. Park Cannon, who identifies as queer, beat former state Rep. Ralph Long III in a runoff.

Following the election, Cannon was invited to speak in July at the Democratic National Convention, where she announced, “I’m Park Cannon. I am a woman. I’m African-American. I’m queer. And I am the newest member of the Georgia House of Representatives.”

Georgia’s conservative lawmakers introduced and passed the anti-LGBT House Bill 757 in mid-March, a move the Human Rights Campaign called “shocking.” The bill had provisions saying no pastor could be forced to perform a same-sex wedding ceremony and allowed faith-based organizations to discriminate against groups or employees that “violate such faith-based organization’s sincerely held religious belief.”

“I do not think we have to discriminate against anyone to protect the faith-based community in Georgia,” Deal said in his veto remarks.

Georgia Department of Corrections under investigation

In April, Georgia Voice broke the story that the US Department of Justice and the US Attorney’s Office opened an investigation into how the Georgia Department of Corrections treats LGBT prisoners.

“We’re looking at potential violations of the Civil Rights of Institutionalized Persons Act (CRIPA), which deals with the constitutional rights of prisoners in institutions like prisons,” said John Horn, US attorney for the Northern District of Georgia. “What we can say is that we have received some complaints relating to allegations of abuse in Georgia prisons.”

One of the high-profile cases related to the investigation is that of transgender woman Ashley Diamond, a Rome, Georgia, resident who alleged mistreatment, sexual abuse and denial of medical treatment. The Justice Department said this is the first investigation it’s ever conducted that is focused on LGBT prisoners.

Atlanta’s LGBT and allied communities came out in force to mourn the loss of 50 lives and support the 53 injured in a June 12 domestic terror attack against Pulse nightclub, a LGBT mainstay in Orlando, Florida. In the days and weeks after, Atlantans organized a plethora of vigils and fundraisers, and there was an increased interest in active shooter survival training from the Atlanta Police Department.

“I am heartbroken, angry and determined to fight against any senseless acts of violence and hate, especially when it targets a strong and loving community,” lesbian Georgia House Rep. Karla Drenner (D-Avondale Estates) said following the attack. “Terrorism, gun violence and homophobia have no place in our society. Our thoughts and prayers continue to be with the victims and LGBT community.”

After two years of planning, Pride School Atlanta opened its doors at the Unitarian Universalist Congregation of Atlanta in July.

The K-12 nonprofit school for LGBT educators, students and families, is the brainchild of transgender educator Christian Zsilavetz.

“There’s a difference between being openly affirming and acting as if everybody has a great time with your kid being gay or gender diverse. We know that every parent struggles. All of our parents have struggled. And if you hang out with people who get it, then you’ll get it faster,” Zsilavetz said. “When you walk in, there’s nothing in there that would typically push out folks, especially those in the LGBT community.”

A chaotic week at Lost-n-Found Youth

As part of a late-August leadership reorganization at Lost-n-Found Youth, a homeless LGBT outreach organization, Executive Director Rick Westbrook’s title was changed to “co-founder and director of outreach.” The announcement was met with a wave of criticism and was followed by the resignations of numerous board members. Former board members came out against Westbrook, but at the end of the week in a contentious board meeting open to the public, he was reinstated as executive director, though that decision, too, wasn’t met without criticism: an eighth board member resigned on the spot.

The organization restocked its board of directors in the coming weeks, but questions about diversity resurfaced after it was revealed that the new board was 80 percent male and 100 percent white.

The group later announced that they were abandoning a years-long plan to renovate an aging Midtown building and turn it into their new shelter. Instead, LGBT-friendly Saint Mark United Methodist Church – which owns the building and land around it – is seeking a developer to turn it into an office building or tower and provide space to Lost-n-Found Youth upon completion.

Atlanta and the greater Georgia LGBT communities celebrated the lives of three activists, idols and role models this year.

Beloved drag queen Diamond Lil passed away at age 80 on Aug. 9. The Savannah-born queen overcame the adversity of being gender non-conforming in the 1950s South to become the “Queen of the Jukeboxes” on Atlanta’s LGBT scene. Fellow Savannah native The Lady Chablis passed away on Sept. 8 at age 59.

Chablis, a transgender performer, gained worldwide fame for her roles in the book and movie versions of “Midnight in the Garden of Good and Evil,” and was an integral part in the city’s Pride festivities.

On Oct. 2, cancer took the life of Cheryl Courtney-Evans, an Atlanta transgender activist and co-founder of Transgender Individuals Living Their Truth. Courtney-Evans was a fixture in the metro’s LGBT community and spoke out on a number of issues.

Amidst the disbelief over the 2016 election results on Nov. 8, Georgia did have a glimmer of hope: Gwinnett County voters elected Sam Park to the state House. Park, 31, upset Republican Rep. Valerie Clark, and became Georgia’s fourth LGBT lawmaker.

Park is the first openly gay man to get elected to the state Legislature, and he’s also the only Asian-American representative in the 2017 state House. Park follows in the footsteps of former legislator Rashad Taylor, who came out as gay while in office and did not get re-elected afterward. Over a dozen gay men have run for legislative seats, and Park is the first to succeed, beating a three-term Republican incumbent to do so.