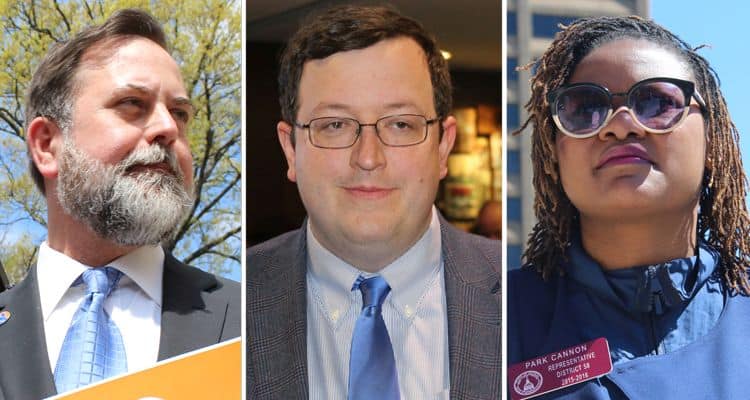 Passing a modernized adoption bill is a top priority for the General Assembly and statewide LGBT advocacy group Georgia Equality in 2018, but a continued discussion looms over potentially discriminatory language added at the tail end of the 2017 session.

“I suspect that there will still be a lot of discussion around that provision,” state Sen. Josh McKoon (R-Columbus) told Georgia Voice. “The bill that modernizes Georgia’s adoption code would be a bill that people would be pretty anxious to get through the process.”

The provision in question, added by Sen. William Ligon (R-Brunswick), would allow adoption agencies to refuse potential parents based on the agency’s mission. Reaction to the proposed amendment was swift, with activists calling it a “license to discriminate.”

“We are very concerned about the adoption bill that was introduced last year and it’s actually a good bill that needs to pass, but there was language added in an amendment that would create a license to discriminate,” said Jeff Graham, executive director of Georgia Equality. “There’s 13,000 kids in the foster care system in Georgia who need the legislation that oversees foster and adoptive services to be updated.”

McKoon said the criticism regarding Ligon’s amendment was not warranted, and that coverage of the situation blew it out of proportion. He believes the Senate needed more time to examine the bill, saying the House had been working on the adoption code overhaul for years.

“I do think there’s a discussion that needs to be had about whether or not we think faith-based adoption agencies should be allowed to operate in our state and whether or not the law is going to recognize that a variety of private adoption agencies have missions that may run contrary to somebody’s preference,” McKoon said. “I can’t speak for anybody else, but I believe the public policy of Georgia ought to maximize the number of providers. So, I am a little befuddled as to why we would not want our law to be written in such a way to maximize the number of agencies out there. No one in this debate … is suggesting that a fit parent should not be allowed to adopt a child.”

He believes what was missed in coverage of Ligon’s amendment was its intent: to make room for more agencies, which means more children are placed.

“Leadership on both sides of that would like and support a clean bill, so I could definitely see the adoption bill moving next year,” said openly gay state Rep. Sam Park (D-Lawrenceville).

State Rep. Renitta Shannon (D-Decatur), who came out as bisexual in October, said it was “heartbreaking” because some of those children could have been adopted in 2017 had the bill passed, but were now forced to wait “an entire year more.”

Kaleb McMichen, spokesperson for House Speaker David Ralston, told Georgia Voice that they remain hopeful the Senate will “act in the best interests of children awaiting adoption, and approve that bill early.”

“There was bipartisan disappointment on Sine Die last year … It was the first time I saw the Speaker get visibly upset,” Shannon said. “There are children sitting in foster care and under protective services and they need to be adopted and go into great homes. For someone to hijack that bill with anti-gay legislation … is just a waste of time and bad for the state.”

A continued fight for religious exemptions?

“Waste of time” or not, the push for a religious exemptions bill is likely to continue once the session begins on Jan. 8 — especially now that many Republican gubernatorial candidates indicated their support.

“There is already a RFRA [Religious Freedom Restoration Act] bill that was introduced in 2017 in the Senate, and all of that legislation remains live and active. We may see something that is reintroduced, we may see movement on the current RFRA bill,” Graham said. “Certainly the fact that the Speaker has indicated in his public comments that he feels there is no need to address that issue in 2018 gives us some comfort there.”

Georgia’s conservative leadership, led in part by McKoon, has been pushing for a religious exemptions bill for years, most notably when House Bill 757 made it to Gov. Nathan Deal’s desk. The governor vetoed the bill, and in 2017 neither chamber made religious exemptions a priority. Despite that, Sen. Marty Harbin (R-Tyrone) introduced Senate Bill 233, which intends to incorporate religious exemptions language into state law by reference.

“He offered a clean, state version of the federal Religious Freedom Restoration Act. I have certainly continued to advocate for the passage of that bill,” McKoon said.

A prime discussion point surrounding religious exemptions legislation is how it would affect Georgia’s chances of attracting the new Amazon headquarters should such a law hit the books in the Peach State.

“I do believe that for a majority of conservatives, they understand that there is so much on the line and it would result in huge economic losses,” Shannon said.

One of the greatest criticisms of religious exemptions legislation is that at the federal level, there are civil rights protections — but not at the state level in Georgia. Two bills were introduced this year, one each in the House and Senate, to address this issue. It’s unclear how successful those bills may be in 2018, given the combination of a shortened election-year session and a majority Republican General Assembly.

Graham said he’s hopeful there will be a “good hearing” on the Senate side, and openly queer Rep. Park Cannon (D-Atlanta) said she’s thankful for “trusted leadership” in the House that will work on this front.

Not everyone is as optimistic, however.

“I’m concerned about unintended consequences of well-intended legislation,” Graham said. “I think that before we start moving down that road, we need to have a clearly vetted piece of legislation that isn’t going to make the environment even worse on some of these First Amendment issues.”

McKoon said when he spoke with Sen. Lester Jackson (D-Savannah), who introduced the Senate bill, he raised questions he felt were not able to be answered by those who backed the bill, particularly in regard to religious-based private schools.

High-time for a hate crimes bill

“We have found from our colleagues at the Anti-Defamation League that there is Republican interest in a hate crimes bill,” Graham said. “Hate crimes bills have been introduced every year since the state Supreme Court declared the earlier version unconstitutional, but there’s not been enough interest from a Republican in either chamber to advance a bill forward. 2018 may be a little different for that.”

Georgia is one of only five states without a hate crimes law on the books. Graham said that creates problems for individuals who feel they have been victims of bias-motivated crimes and seek to have those crimes investigated and prosecuted.

“One of the additional reasons we would love to see this, frankly, is to make sure there is uniform understanding across the state police departments on what bias-motivated crime looks like,” Graham said. “We only have a handful of police departments that are doing any reporting on hate crime statistics. We know that those statistics then actually fall short of what the real problem is. At the very least, we need to have some strong statistics on how to address violence against our communities.”

Shannon and Park both indicated their support of the bill, should it get introduced, but McKoon had some concerns with it.

“When you criminalize this offender more because of the motivation, I’m just not sure what kind of message that really sends,” he said. “If the problem Mr. Graham has identified is there are prosecutors who are not being sufficiently aggressive when someone is harassed, injured, killed … and it’s because of some sort of anti-gay motivation, then I think what we need to do is we need to have a pretty robust conversation about prosecuting attorneys around the state about ‘why are y’all treating these cases differently?’”