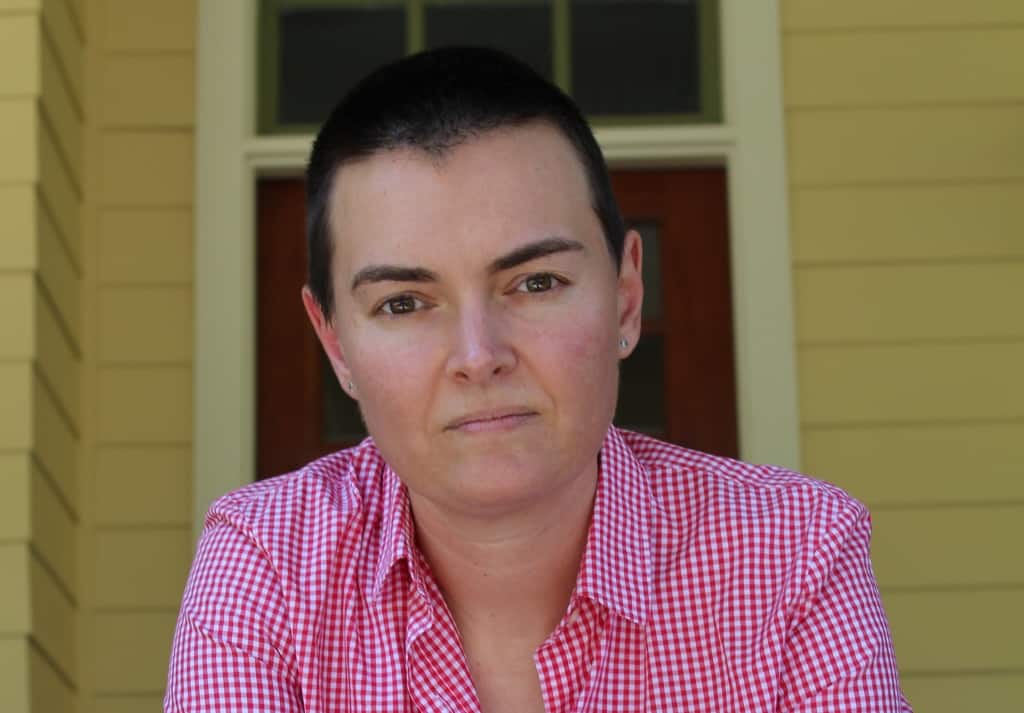 A widow, a death certificate and the fall of Georgia’s same-sex marriage ban

Note: this story was written before the June 26 announcement by the U.S. Supreme Court striking down same-sex marriage bans nationwide.

When marriage equality becomes the law of the land in Georgia, thousands of same-sex couples across the state will line up to exchange vows. That’s the picture everyone will have in their minds and on their social media feeds that day—happy couples, flowers, uninhibited enthusiasm.

But another victory—no less important or profound—will take place, and it won’t be in a county probate court or a chapel or an elaborately decorated event space. It will take place in a nondescript room at the State Office of Vital Records, when the marital status on the death certificate of Pam Drenner will be updated from “single” to “married.”

Sisson, a 35-year-old engineer who lives in Decatur, and Drenner’s relationship wasn’t exactly a story of love at first sight. In fact, it wasn’t even love at first decade.

They met through mutual friends around late 2001, thereafter running into each other every so often but not spending any significant amount of time together. But come 2011, circumstances had changed for both, and a relationship bloomed.

Sisson was aware that Drenner had had ovarian cancer since 2008 which, while she was in remission, might have given one pause about entering into a relationship with someone in that situation given the aggressiveness of the disease. But it didn’t deter Sisson.

“Did I worry about the situation I ultimately found myself in? Certainly I knew it was a possibility, but I think the overriding thing was that I loved her,” she says. “I knew her for many years before she was diagnosed so I never saw her as ‘oh this is the person with cancer.’ I saw her as Pam. So that didn’t scare me. I felt like it was something that if I could help her in any way, with that or through it, that’s what I wanted to do. I loved her.”

They clicked, with Sisson’s low-key, almost soft-spoken personality and fierce intelligence pairing up well with the more extroverted Drenner.

“She was very unique, very dynamic, funny. She made everyone laugh. She was always very creative so you never knew what each day was going to bring. You were always entertained, always doing something. She was rarely bored. If she got bored she developed some new adventure for everybody to go on, and sometimes that would incorporate the whole neighborhood. Very intelligent.”

They married on Valentine’s Day 2013 in New York. Six weeks later, Drenner went in for a check-up and newlywed bliss came to an immediate halt. The cancer was back.

While not a complete surprise given the nature of the disease, the couple was still taken aback by the timing.

“I remember being a little stunned thinking, man, I thought we’d have a little longer,” Sisson says. “We had a month!”

After getting over the initial shock, they went into action, led by Drenner.

“She was like, okay what do I need to do and what are my options and getting different opinions from different doctors at different hospitals,” says Sisson, who shaved her head in solidarity with Drenner as she went through her treatments.

While no one would question Drenner being a fighter, she wasn’t a fan of the term “fighting cancer,” as Sisson explains, “because in a fight somebody has to lose and oftentimes that’s the cancer patient.”

Drenner went through several treatments over the following year. But they wouldn’t take. She died on March 1, 2014, leaving behind Sisson and Drenner’s two children from a previous marriage. But Sisson’s fight wasn’t over.

The day after Drenner’s death, Sisson went to the funeral home with a friend and Drenner’s 18-year-old son Evan. It should have been routine, a formality, just filling out some paperwork so they could get back to grieving.

She began filling out a form that would provide the information for Drenner’s death certificate, not hesitating when she got to the section on marital status. She checked “married,” filled in her name as the spouse and gave the form to the funeral home employee.

“He tells me the state of Georgia doesn’t recognize our marriage,” Sisson says. “So my options were to say Pam was single, widowed or divorced. And I was like, well she was married and I have a marriage certificate.”

They went back and forth, with Sisson understandably unwilling to say her late wife was single, widowed or divorced. The only other option available was a box called “unknown.” Sisson checked it and they left.

One day a few weeks later, still fresh from enduring the gravity of Drenner’s passing, Sisson got a letter in the mail from the State Office of Vital Records. She opened it, pulling out Drenner’s death certificate. Under marital status, it said “single.”

“It was sickening,” she recalls. “I initially thought it was the funeral home so I marched down there because I thought we had been in agreement, but they actually did very well. They were as bothered about it as I was and started looking into it and made calls down to the state for me.”

Apparently, “unknown” defaults to “single” in the state’s system. And their marriage wasn’t legally recognized by the state, so there was nothing to be done. The state of Georgia had erased Drenner and Sisson’s marriage.

“Even sitting there that day with them telling me that, I was just completely dumbfounded,” she says. “I was Pam’s full-time caregiver. I’d spent six or seven months solely 24 hours a day caring for Pam and I feel like that type of commitment only comes with something like a marriage. That’s what marriage is, you’re making that level of commitment to someone. And then sitting there in the funeral home and having essentially the state of Georgia say no, we don’t recognize that commitment? It feels like a huge slap in the face.”

Taking a cue from her late wife, she sprung into action.

It was April 22, less than two months since Sisson had said goodbye to her wife. She stood in a conference room in Midtown with three other couples (a fourth would join the suit a few months later) and a team of attorneys from Lambda Legal. She looked out at an army of local and national press who eagerly waited to hear from the plaintiffs at the center of the federal class action lawsuit filed that morning challenging Georgia’s 2004 same-sex marriage ban.

For Sisson, an admittedly private person with no previous experience in activism and the only plaintiff without a partner there with her that day, it was not easy. More accurately, as she says, she felt like she “was going to puke.” But she thought of Pam.

“Pam was a very courageous person and through her illness she really gave everyone around her a lot of strength,” she says. “I carried a lot of that with me and like to still think, even to this day moving forward in my life, I think that’s where a lot of my calmness stemmed from. And I thought about her and how strong she was. Your perspective changes when you’re sitting there facing death with someone you love.”

Beth Littrell, senior attorney for Lambda Legal, says, “If the Supreme Court recognizes that state marriage bans violate the constitutional rights of same-sex couples, we expect Defendant [state registrar Deborah] Aderhold to issue a corrected certificate reflecting the reality that Pam Drenner was married to Jennifer Sisson at the time of her death.”

And if Aderhold refuses, Littrell expects that a ruling in the federal lawsuit will ensure that an accurate death certificate is issued. Sisson can’t help but smile at the thought.

“I remember saying at the press conference and I certainly still feel this way, that it’s a chance to write a different ending to the story. I don’t know, I feel some sense of relief, I don’t know quite how to capture it. For so long I felt like I fought for Pam and our relationship and everything and I feel like this is the last battle that can finally seal things up. And I feel that I’m still carrying some of that, carrying a little bit of the fight for Pam and me and everything.”

“I think it is a sense of closure. Also kind of a disbelief of man, look at this path I just came down. Did this really happen? Because from that moment in the funeral home, I’ve never felt so alone and just so much against me. And yet to come out on the other side of that less than a year-and-a-half later I think there will certainly be a little bit of ‘We did it.’”