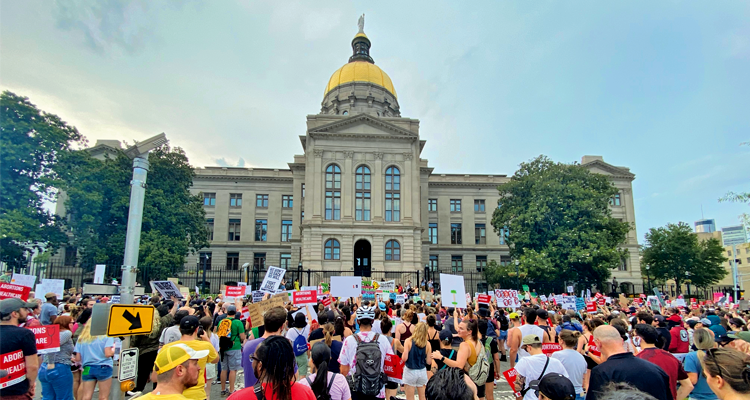 Abortion Rights are On the Ballot

You’ve heard it before. “This election is the most important of our lifetimes.” It’s a phrase that has been evoked seemingly every year since 2016. With the overturning of Roe v. Wade by the Supreme Court this summer, however, that phrase has never been truer. With abortion access now dictated on a state-by-state basis, who we elect this cycle will directly impact how accessible abortion and other reproductive health care are.

With Gov. Brian Kemp’s record on abortion, the impact of this race is clear. In 2019, he signed one of the most restrictive abortion laws in the country, effectively outlawing the procedure after six weeks of pregnancy with exceptions for women facing serious hardship or death or in cases of rape or incest, so long as a police report was filed. With Roe v. Wade overturned, a federal appeals court panel allowed the law to go into effect this summer.

By contrast, Democrat Stacey Abrams’ campaign website states she would work as Governor to “repeal Brian Kemp’s extreme and dangerous ban on abortion after six weeks,” as well as “support safe pregnancies, [and] invest in maternal health care.” Like Kemp, Abrams comes from a Christian background, and she was “anti-abortion” until going to college. She told CNN, however, that she met a friend in college with similar faith values with whom she had conversations “about what reproductive care and abortion care really is … This is about a woman’s right to experience and determine her future.”

“[If Abrams is elected,] I think you’ll see much more proactive legislation to support access to abortion, contraceptives, and other forms of reproductive health care,” she said. “Knowing the redistricting and gerrymandering of our districts in Georgia, Republicans have made it really hard for Democrats to take control over either legislative body. She as Governor would have a tough fight ahead of her, but she could be the stop to all additional bans to sexual and reproductive health care, among other things, whether it’s access to contraception or decisions about who we marry. Stacey Abrams would still have a tough fight ahead of her as Governor, but she would be there to support the values we care about and support the people of Georgia.”

Outside the Governor’s race, the race for the Senate seat occupied by Democrat Rev. Raphael Warnock is of tantamount importance. Republican Herschel Walker is up against Warnock and, like Kemp, has extreme views on abortion — actually, even more so. Walker has expressed support for a full federal abortion ban without any exceptions for rape, incest, or the health of the mother. However, he walked back this opinion during his debate with Warnock on October 14. Warnock, during that same debate, said that “God gave us a choice and I respect the right of women to make a decision” regarding abortion.

Other races Kennedy said are of importance to Planned Parenthood are the races for Secretary of State and Attorney General.

“We’re also working hard on the Secretary of State race, knowing that that position really controls how we vote and puts restrictions on how we vote,” she said. “I think we’ll see this year the impact of recent legislation around voting rights and how it impacts turnout.

“We know moments after the Supreme Court struck down Roe v. Wade, Brian Kemp was there eager to enact his own six-week abortion ban and putting that into effect,” Kennedy continued. “He did that with the help and support of the Attorney General.”

She also emphasized the importance of state legislator races, as well.

“We know that because of gerrymandering and a lack of a fair redistricting process in Georgia, our legislative districts aren’t drawn in a way that provides support to pro-choice legislators, unfortunately,” Kennedy said. “So, for us it’s important that were able to cut down any ability for a supermajority of anti-choice legislators and also that we support and amplify the work of pro-choice legislators when they’re elected and increase the numbers of them.”

Should this election not go in the direction toward reproductive freedom, Planned Parenthood will continue to provide the services it’s able to and fight for the reproductive rights of Georgians.

Early voting is currently underway and ends November 4. Election day is on November 8. For more information on your polling place and other voting information, visit mvp.sos.ga.gov.