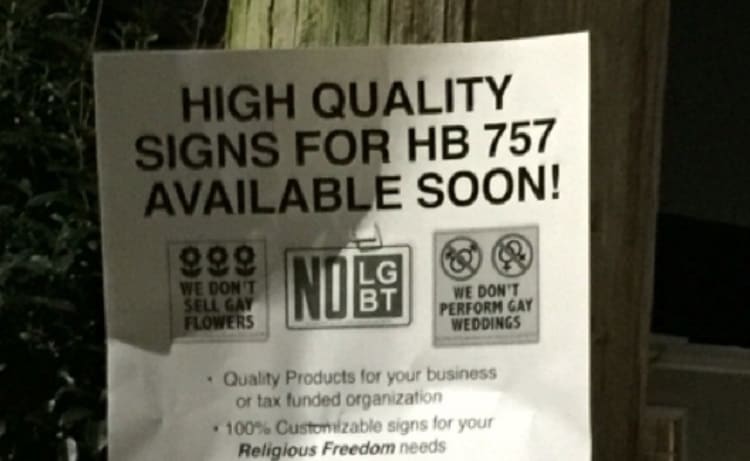 If this is satire, someone’s going to great lengths to make it happen.

Flyers have been spotted in Reynoldstown, Cabbagetown and Midtown advertising a company that sells signs for businesses who don’t want to serve the LGBT community. The company, 4A Graphics of Georgia, includes nuggets of info on the flyer like “Quality products for your business or tax funded organization” and “100% customizable signs for your religious freedom needs.”

A look at the company’s website reveals a number of signs apparently available for purchase, including “No gas for gay people,” “Hotel closed to homosexuals,” “We don’t sell gay cakes,” “Attention: We do not serve gay clients” and more. There are other signs for those who don’t want to serve people of various faiths (including Christians) and those with tattoos.

There are a few hints this is a joke, perhaps from someone in opposition to HB 757 who wants to make a point or start a conversation. Many of the signs have a line at the bottom of them that says “By the order of the governor of the state of GA and HB 757,” plus when you attempt to order anything, everything’s listed as out of stock.

HB 757 is, of course, the anti-gay bill that’s caused a national backlash, with over 400 businesses signed up in opposition to it, and just this morning leaders from Georgia Equality, HRC and Lambda Legal delivered 75,000 emails and postcards in opposition to it to Gov. Nathan Deal’s office.

We’ve reached out to the company via phone and email and have not heard back yet. Here’s a gallery of signs (apparently) available from the company below.

UPDATE: We’re hearing from readers that they’ve seen the flyers posted on telephone poles and on car windshields in Virginia Highlands and Little 5 Points as well.