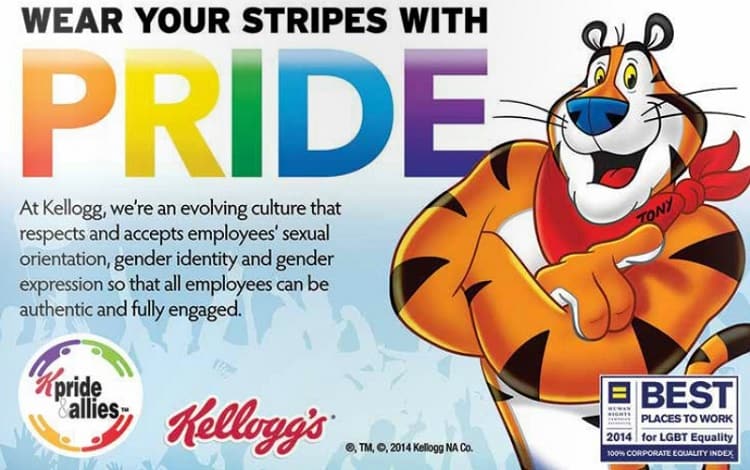 Certified hate group the American Family Association threw some chum to their supporters by pointing out the ad Kellogg’s placed in this year’s Atlanta Pride guide.

This has led to a flood of comments on AFA’s Facebook page, including this from one Joe M. Wesson, who is on a first name basis with Tony the Tiger, so you know it’s personal:

what they’ve done to tony is thoroughly disgusting. they won’t stop until every comic character in the world is a homosexual. criminal is what it is. so sad.

Kellogg’s was a sponsor of the Atlanta Gay Pride March and festival last month. Apparently, Tony the Tiger wants to make sure you and your kids “wear your stripes with pride,” gay pride that is. According to the AFA Facebook page, “They even put an ad in the ‘Pride Guide.” But wait, there’s more. According to HRC’s Buyers Guide, Kellogg’s acquired a rating of 100, a perfect score, due to Kellogg’s efforts to support the LGBT community. Worst of all, though, the “PRIDE” ad didn’t even get the pun right. Tigers don’t belong in “prides,” let alone pride parades.

Kellogg’s released a statement to the Huffington Post on the AFA’s response:

Kellogg is firmly committed to diversity and inclusion and puts a tremendous amount of effort toward ensuring equality through our policies, benefits and culture. We are honored to have been named a Top 50 company for Diversity by DiversityInc, and for achieving a perfect score on the Human Rights Campaign’s Corporate Equality Index.

Kellogg’s isn’t the only cereal conglomerate to spread the LGBT love, with General Mills getting into the spirit with LGBT-themed ads for Cheerios and Lucky Charms. And don’t forget Kraft’s Honey Maid commercial, which led to an even more heartwarming follow-up ad about the negative response.