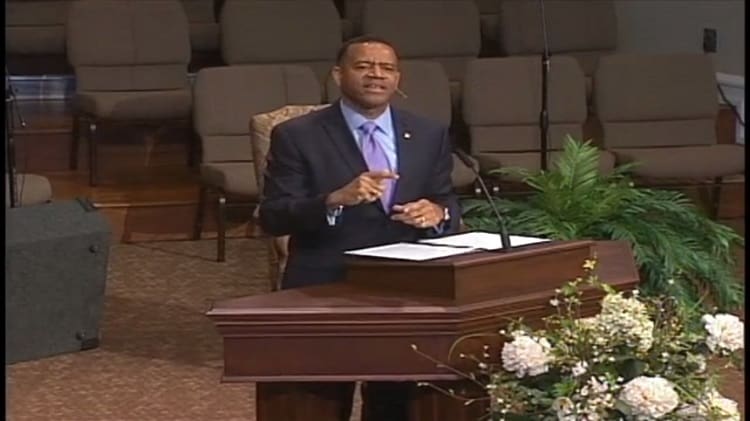 Ousted Atlanta fire chief Kelvin Cochran, who was let go in January by Mayor Kasim Reed for not following city protocol after the publication of his anti-gay book, gave a sermon at a Cartersville church recently where he compared himself to Jesus Christ, Job and other biblical figures.

The news comes following recent remarks by former Atlanta mayor and U.N. Ambassador Andrew Young, who said Cochran doesn’t understand the Bible, and signs that the Baptist leaders who initially sided with the former fire chief are beginning to distance themselves from him.

Cochran then went on to claim that God told him he was in the same company as Job, Jesus Christ and others.

“God reminded me that I’m in pretty good company when it comes to God-induced sufferings. He reminded me, brothers and sisters, that Job was just minding his own business, being a faithful husband, taking good care of his children, minding his flocks in his fields and god volunteered him for an unimaginable God-induced suffering. But after he endured the suffering, God blessed him with twice as much as all that he had prior to the suffering.”

Cochran then compared himself to Daniel in the story of him and King Darius, and how others plotted against Daniel to bring him down, making a comparison between the 30 days that King Darius made Daniel pray to only him and the 30-day suspension Mayor Reed gave Cochran. The plotters against Daniel were thrown to the lions, Cochran says.

“[Daniel] was so faithful and so successful, the King was thinking about putting him over the whole territory. The other two presidents and some princes put up a plot against Daniel and they said, ‘The only way we’re going to get Daniel in trouble because he’s so efficient, is through his faith.’ So they made the King sign a decree that nobody could pray to anybody but the king for guess how long? 30 days. Daniel says, ‘As faithful as I am to you oh King, I’m going to sustain my prayer life,’ and he kept right on going. His friends caught him praying, he ended up in the lion’s den, the punishment for praying to anybody besides the King. The King was brokenhearted. He loved Daniel, he prayed and fasted all night and ran to the lion’s den the next morning and realized that Daniel’s God had saved him from the lions. He made a decree that nobody could worship any other God in this kingdom but Daniel’s God and threw the plotters, the schemers against Daniel and their families, in the lion’s den and they became food for the lions.”

Cochran made the final comparison, saying, “Then he reminded me of the ultimate suffering servant, Jesus Christ, who suffered, bled and died. Rose again on the third day and because of his suffering he has the name that is above every name. God blesses always during suffering.”

Cochran also dove into the book controversy and said that sex should only be had for procreation and that it should only be between a man and a woman—a point met with a round of applause by those in attendance.

He ended his sermon by predicting his full vindication, whatever that may entail.

The end credits then ran over an image of Cochran’s book, “Who Told You That You Were Naked?”

Evangelicals distancing themselves from Cochran?

A group of Baptist leaders held a rally for Cochran on Jan. 13 at the Georgia State Capitol that doubled as a show of support for so-called “religious freedom” bills that many fear would open the doors to increased LGBT discrimination. But those same leaders have since tried to put distance between Cochran’s situation and the fight over the bills.

Virginia Galloway, regional director of the Faith and Freedom Coalition, made such a point in a recent interview with the GA Voice, saying, “The Religious Freedom and Restoration Act would not help him from a legal standpoint. His situation is an employee and employer situation which would be covered by federal law. The RFRA would not have any bearing on his situation one way or another.”

Pastor Mike Griffin of the Georgia Baptist Convention reiterated the point when asked about Cochran during an 11Alive News debate this week with Bryan Long, the openly gay leader of progressive political group Better Georgia.

“They’re two separate issues. The issue with Chief Cochran has to do with an employment issue,” Griffin said, a point Mayor Kasim Reed has been making ever since he fired Cochran.

And in a Jan. 28 press conference held by Baptist leaders in support of the bills, not one speaker mentioned Cochran’s name.

It remains to be seen whether evangelical leaders will continue to distance themselves from Cochran as the “religious freedom” bills fight continues.