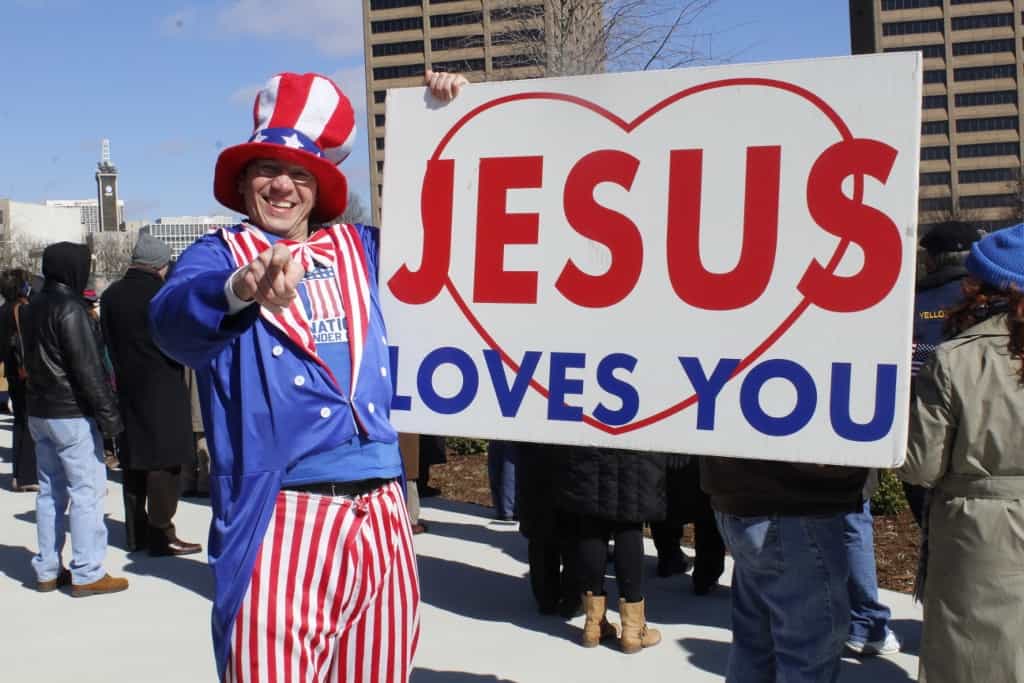 Anti-gay preacher Franklin Graham decried marriage equality and transgender rights at a prayer rally Wednesday afternoon at the Georgia State Capitol. Thousands of people packed Liberty Plaza for the event, which is part of Graham’s Decision America tour and took place the day after a Rally Against LGBT Discrimination hosted by Georgia Unites Against Discrimination. There was heavy security for the rally, with several streets blocked off and, by one trooper’s unofficial count, nearly twice the number of Georgia State Troopers on hand as normal.

The son of evangelist Billy Graham listed off the “sins of our nation,” which he said included racism, abortion and gay marriage. He also referenced how city leaders in Charlotte resurrected a controversial bathroom ordinance that involved giving transgender people the right to use the public bathrooms that match their gender identity.

“If this person wakes up in the morning and they feel like they’re a woman, and it’s a man, and he wants to go into a ladies restroom then they can do that. That’s [Charlotte Mayor Jennifer Roberts’] goal,” Graham told the crowd. “And I’m going to tell you right now, that’s wicked and that’s evil. Men belong in men’s bathrooms and women belong in women’s bathrooms, and we don’t need men and predators going into women’s bathrooms. I’m just telling you. Now, that’s what happens when Christians don’t vote, this is the kind of garbage we get.”

Graham’s message throughout the rally was urging people to vote and to run for office, warning people, “It’s not that the enemy is at the gate, they came through the gate a long time ago. They’ve left the gates wide open, and we have allowed our moral walls and gates to deteriorate and to fall down.”

The rally followed a morning breakfast that featured a slew of anti-LGBT speakers, including the Benham brothers, Alveda King, Pastor Kevin Williams, Rafael Cruz (father of Republican presidential candidate Sen. Ted Cruz) and former Atlanta Fire Chief Kelvin Cochran. People then went to the Capitol to lobby legislators and then to Liberty Plaza for the rally, a lineup of events being called Georgia Religious Freedom Day, hosted by a number of organizations including the Faith & Freedom Coalition, the Family Research Council and the American Family Association.

It was great to see former Atlanta Fire Chief and head of US Fire Administration Kelvin Cochran again today. pic.twitter.com/IEfgdTPp0B

Graham’s choice of words wasn’t surprising, as he has said in the past that gay people are “the enemy” who want to “devour our homes” and “devour this nation” and just this past Sunday telling WSB Radio’s Scott Slade that same-sex marriage is “a major failure of our nation.”

The next stop in Graham’s Decision America tour is later this month in Honolulu. Meanwhile, legislators in Georgia will continue to consider the now eight “religious freedom” bills floating around the Gold Dome.