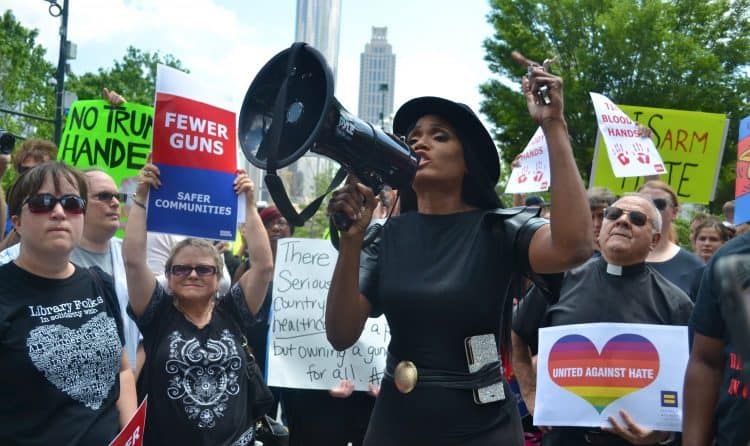 Atlanta LGBT, ally activists give inside tips on effective protesting

Some of these issues can be addressed in meeting rooms and conversations with elected officials. But some elicit such a powerful response from the public that they’re best addressed in the streets.

When those times arise, there’s a desire to “do something,” but sometimes it’s hard to know where to begin. Georgia Voice reached out to a number of Atlanta activists for advice on how to develop, execute and evaluate these movements.

Allies to the cause

“If you know you’re going to go forward with a protest, and you know it’s going to be the most effective way to draw attention to the issue or put pressure on an individual or organization or create momentum around an issue … then a good next step is figuring out who are the stakeholders that need to be involved in that?” said Jeff Graham, executive director of Georgia Equality.

James Brian Yancey, founder of mentor organization Rainbros., which helped organize the Transgender Equality March in July, said groups he’s involved with plan ahead on two fronts: first, for things that they anticipate may come to pass, he said there’s an effort to identify who is interested in being in charge of a response; and then for things that come out of nowhere — like the transgender military ban tweeted out by President Trump on July 26 — a different reaction is required.

“We usually try to break that down into, are we trying to gain awareness of an issue? Are we trying to get a specific storyline or message? Other times you really want there to be an angle; you want them to leave with a message or thought they didn’t think before,” Yancey said. “The last thing, is there anything they should leave with a further action?”

In the case of the Transgender Equality March, that further action was donating to a city-wide fundraiser benefiting trans nonprofits.

Protest location and response time will determine whether or not a permit is required. Graham said protests planned at the Gold Dome will require paperwork and occasional costs, and permitting may need to go through the Parks Department, the Police Department or the City of Atlanta, depending on who owns the property.

Protests with more time to plan — and get permits — may also have requirements handed down from city officials. Lukis Newborn, political activist and director of Civic-Minded Citizens, said the March for Science had to have portable toilets and a march route provided to the city because of the crowds expected.

“Sometimes it does take time to plan, but it’s an issue that is going to be on people’s minds for a while,” Graham said. “After Pulse, here in Atlanta, we chose to take a couple of days … When we actually got the community event together, I’m really glad we took the time to do that because it allowed us to have a really powerful, meaningful program that allowed us to hit a lot of themes that we might not have been able to hit if Georgia Equality had called people to the corner of 10th and Piedmont [immediately].”

But in the case of an immediate response, there may not be time to go through the permitting process.

“A lot of people don’t realize if you are exercising your First Amendment rights, the police are generally going to try and help you as long as you’re communicating with them,” Yancey said. “If it’s rapid response, generally the rules of thumb are have a planned route; if the police communicate with you, you talk to them, tell them what the plan is.”

There are multiple dimensions to tackle on the day of a protest.

In addition to the core group of organizers, Graham recommends having a few key positions to keep the event moving and safe on the day-of: attorneys, security and an emcee to introduce any speakers. Ken Wainwright, LGBT ally and activist, also suggested having someone in charge of first-aid stations and ensuring protesters have bottled water.

“Have people at the front of the march know where the march is going,” Newborn said. “Have people that are very easily identifiable as volunteers.”

Marches can also be prefaced with activities like sign-making, keynote speakers and group chants to “get fired up,” as Wainwright says.

“It’s not about advocating disobedience, but it is advocating that as Americans, we have a right to protest,” he said.

Social media is a powerful tool protesters can engage in during the march as well.

“If I press a ‘live’ button, you have 125 people at a protest and they’re commanding attention that wasn’t there before I pressed that button,” Wainwright said. “People from other countries are realizing on camera the injustices that are happening in the LGBT community and the black community. Now they’re seeing it … it starts to cause for change to happen.”

“Marching in itself and protesting in itself doesn’t do anything. But what you do after that march and the people you inspire in that process is what matters,” Newborn said. “Without 65,000 people marching in the streets of Atlanta at Women’s March, there wouldn’t be these thousands of people who came together to create nonprofits, to create this movement.”

It’s from the protests and marches that more new activists emerge and political candidates file declarations of intent, he said.

“It doesn’t stop at the steps of the Capitol where we stop marching. That march continues into direct dialogues with our senators,” Newborn said. “The other aspects of protests is they ask those tough questions.”

Change won’t happen overnight, Wainwright said, but that doesn’t mean a protest isn’t effective. He believes what determines success happens later, when protesters have a ballot in front of them.