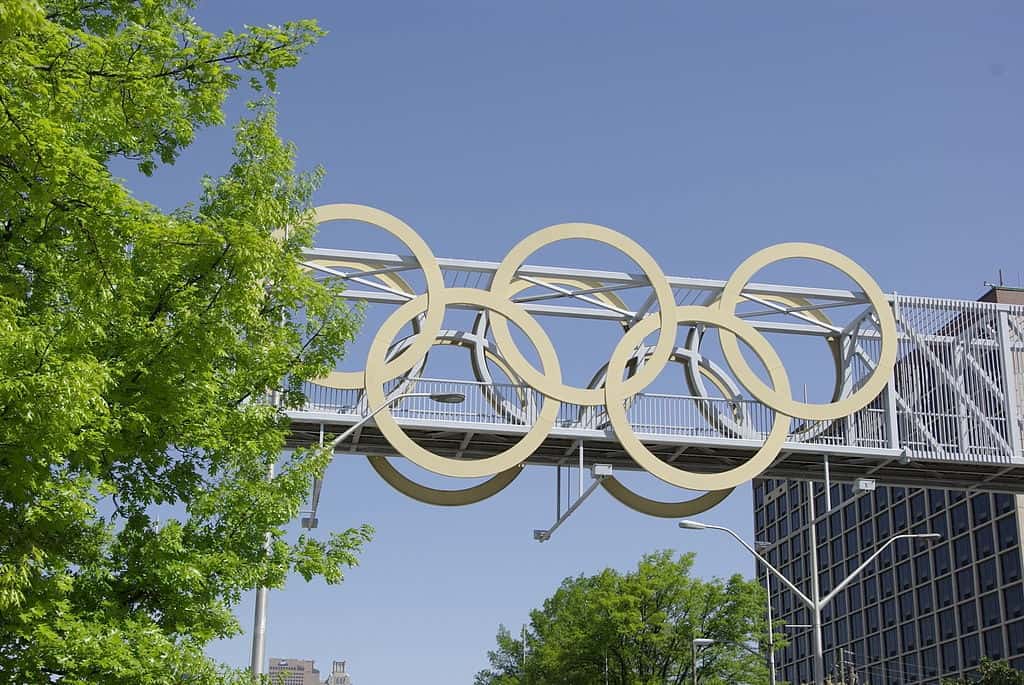 The International Olympic Committee (IOC) is a very touchy organization, most especially when it comes to the Olympic rings. They guard their trademark jealously and litigiously, commonly suing anyone who dares to approximate the iconic rings for their own purposes. Even local street vendors during the Games have been shut down for violating copyright.

Anthony Braswell wasn’t thinking about that when he and a co-worker came up with a dangerous idea. It was 1995, and Atlanta was in the height of Olympic fever as the city prepared to host the 1996 Summer Games.

Braswell served as Director of the Grady Health System Infectious Disease Program (IDP), Atlanta’s new HIV clinic. One day he and his medical director, Dr. Jeff Lennox, were chatting about the enormous HIV education opportunity the Games presented. If only they could garner the attention of the worldwide media that would soon be streaming into the city for a two-week stay.

“A basket of condoms was sitting on the conference table,” Braswell said in an interview with My Fabulous Disease. “Jeff took five condoms out and starting arranging them on the table, and joked that we should make the Olympic rings out of them. I remember looking at him and saying, ‘yeah. Play safe.’ And that is how it started.”

At the time, they didn’t burden themselves with whether or not creating such a campaign was legal, or what the response of the mighty IOC might be. Or exactly how it might be done. They just started working.

“We didn’t think about next steps,” said Braswell. “We were just enjoying the simplicity of the message. There was no budget, no money at all for this idea.” That problem solved itself when people began offering free services to design, photograph, print, and distribute a full-color poster of the fledgling idea.

A marketing company in Los Angeles stepped in with a photographer and studio time. “They took great care in matching the color of the condoms to the Olympic ring colors,” said Braswell. “They also learned that the lubricated condoms caused damage to their camera lens, so they had to scrap those and find unlubricated ones.”

When the drafts of the poster arrived from a volunteer marketing company, Braswell couldn’t believe that “our crazy idea came to life. But it was missing something.”

Meeting with others on his clinic staff, the group realized the “Play Safe” message simply would not translate to scores of international Olympic visitors. “To be effective we needed to communicate with many different nationalities, many different cultures,” Braswell recalled, “so we contacted all sorts of international groups to determine how the ‘play safe’ message would translate.”

They added a border to the central image that spells out the “play safe” message in eighteen languages. “The hardest one was Chinese,” said Braswell. “There were no symbols that delivered the message of safe sex, and we wound up saying ‘have good sex.’ But they did not have a symbol for ‘sex,’ either, so in the text we actually had to spell out the word in English.”

A final graphic detail was adding the phone number for the Georgia AIDS Information Line, a number that still operates today. “We didn’t ask their permission,” Braswell said, because he wanted to protect them. 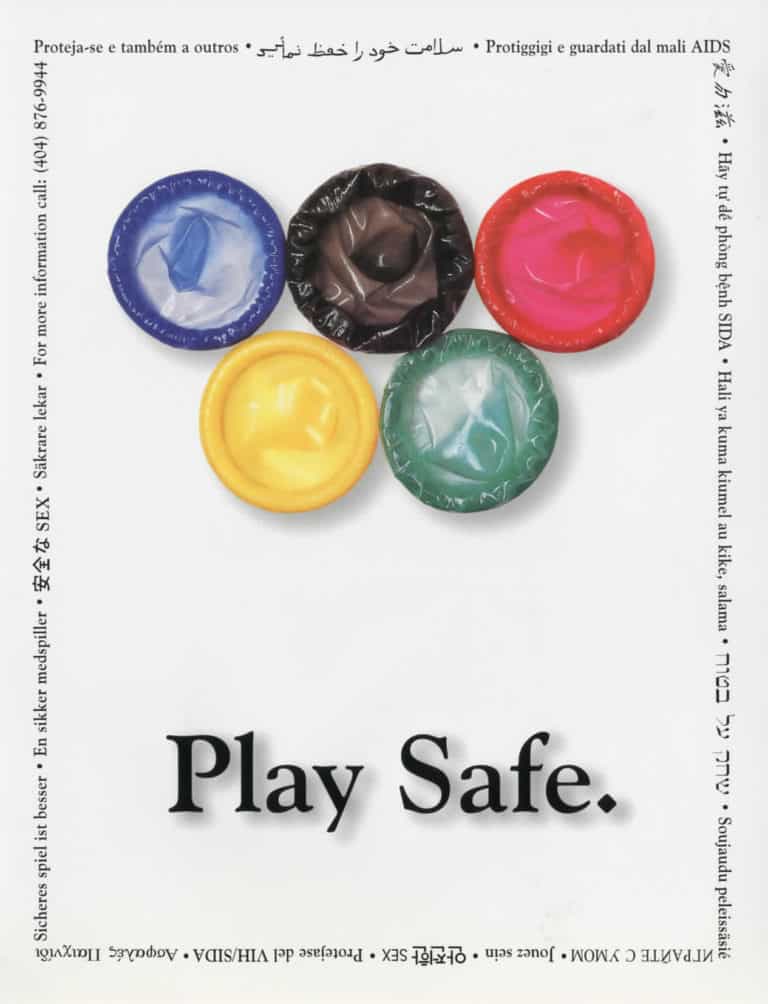 By then, a growing array of Atlanta HIV advocates, from gay men to the staff of AIDS service agencies to health department employees, had heard of the campaign plans and stood ready to accomplish the most daunting task of all: distributing the 750,000 copies of the poster, which a Los Angeles movie studio had paid to print and shipped directly to Braswell’s home.

“The weekend before the Olympics, several large trucks pulled up in front of my house,” Braswell said. “Over one thousand boxes were on them. I was horrified. We filled every inch of my house, floor to ceiling with boxes, and there were still more to go. We took one truck to the clinic and hid about 400 boxes in the storeroom. Even my neighbor put a hundred boxes in her living room.”

Braswell, and the army of volunteers ready to unleash the campaign, knew full well how much the poster would infuriate the IOC. Any potential fallout very likely emboldened them, as much for the publicity as for the fact there was no love lost between the citizens of Atlanta and the IOC. The aloof and arrogant president of the IOC, Juan Antonio Samaranch, had actually asked locals to address him as “your excellency,” a request that went over like stale cornbread in a Southern city so unpretentious it featured a fleet of pickup trucks in its opening ceremonies.

On the opening weekend of the Atlanta Olympic Games, the plan was executed. “It was all very covert,” said Braswell. “Friends working in the Olympic Village helped us sneak the posters in.” Meanwhile, other volunteers had jobs at the hotels, including those where media was staying, so under every door they slipped press packets that included the poster and a statement about the need for AIDS awareness and safer sex materials. The poster was wall-papered on light posts, in store windows and in restaurants throughout the city.

Braswell doesn’t believe many condoms were distributed in Atlanta’s Olympic village. “When we asked about making condoms available, the Atlanta Olympic Committee said no, telling us that there would be no sex in the village. Oh my God.” The attitude contrasts sharply with the 450,000 condoms that will be made available to athletes in Rio. “What a different world we live in now,” said Braswell.

The 1996 poster effort, once the Games began and the materials got out, yielded… not much. At first.

“For a couple of days we heard nothing,” said Braswell. “And then the press began. Officials from the IOC and the Atlanta committee were looking for the people ‘who had done this to the Olympic rings.’”

In a city containing more press than any place on earth during that time, the Olympic condom rings gained traction, leading to officials having to answer questions about whether or not there was an “official condom of the 1996 Olympic Games.” Reporters gleefully reported the answer that no, there was not.

The attention was glorious but short-lived. During the second weekend of the Games, a bomb was detonated in Centennial Olympic Park, an act of homegrown terrorism that stole the headlines and broke the hearts of the good people of Atlanta.

The tragedy took the heat off of the condom poster controversy and shifted attention to the very serious business of security and the bomb’s aftermath. The poster disappeared from media reports as quickly as it had appeared.

As with most acts of activism, whether a flash mob or a protest, the Olympic condom ring poster found an audience, made its point, and was gone.

“In the end, the campaign worked,” Braswell said. “I am so proud of the people who believed in this effort. And this was twenty years ago, before the power of social media!”

“No matter,” Braswell concludes. “It worked. And we pulled it off.”