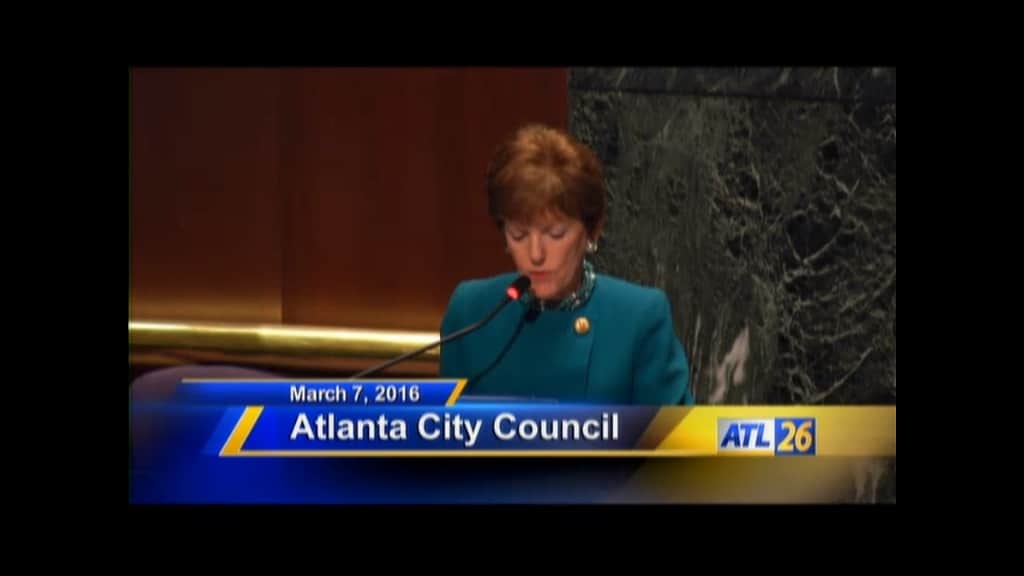 The Atlanta City Council on Monday voted to pass a resolution in opposition to House Bill 757, Senate Bill 129 or any other legislation that would discriminate against the state’s LGBT community.

The move is the latest hit against such bills, following the LGBT community and allies, the business community, many faith leaders and the biggest headline-grabber so far this month—Gov. Nathan Deal.

“I join Governor Nathan Deal, businesses all across Georgia, the LGBT community and all Georgians who know that as Georgians we must stand for inclusion, equality, and fairness for all,” Norwood said in a statement. “As a citywide representative of our capital city, I understand how important it is to have a welcoming environment for everyone who lives, work in, play in or visits our capital city and other communities throughout our great state. Our recent successes in corporate relocations as well as our every expanding tourism businesses are predicated on knowing that Atlanta and all of Georgia welcomes them and embraces them.”

“This is what sets Georgia and Atlanta apart and makes us a world-class environment, taking our place on the world stage. We cannot go backwards; we cannot afford to have discrimination in any form — under any guise — as the law of our state. Our future is too important,” she said.

HB 757 of course is the so-called “Pastor Protection Act” that passed last month in the Senate and now awaits a move from the House. The previous version of the bill was considered one of the least discriminatory of all the “religious freedom” bills, that is until the anti-LGBT language of Sen. Greg Kirk’s (R-Americus) “First Amendment Defense Act” was inserted during a Senate committee meeting. Critics say that version now under consideration by the House would discriminate against the LGBT community, single mothers, unmarried couples and others.

SB 129 is state Sen. Josh McKoon’s (R-Columbus) state version of the federal Religious Freedom Restoration Act. That bill, which faced opposition for many of the same reasons as HB 757 is now, took up much of the oxygen in last year’s session but is stuck in a House committee.

Here’s the entirety of the Atlanta City Council’s resolution below:

A RESOLUTION BY COUNCIL MEMBERS MARY NORWOOD AND ALEX WAN

A RESOLUTION EXPRESSING THE CITY OF ATLANTA’S OPPOSITION TO HOUSE BILL 757 AND SENATE BILL 129 OR ANY OTHER LEGISLATION THAT WOULD ENSHRINE DISCRIMINATION INTO GEORGIA LAW; AND FOR OTHER PURPOSES

WHEREAS, the City of Atlanta (the “City”) is known throughout the world as a tolerant “International City”, serving as a host city for the Olympic Games, the City that is “too busy to hate”, and the City with one of the largest Pride celebrations in the United States; and

WHEREAS, the Georgia General Assembly is considering several pieces of discriminatory legislation that would negatively harm Georgia’s and Atlanta’s vibrant Lesbian, Gay, Bisexual, and Transgender (“LGBT”) Community, such as House Bill 757 which was known in the State House as the “Pastor Protection Act” and was merged in the State Senate with the controversial “First Amendment Defense Act” and last year’s Senate Bill 129 which is commonly known as the “Religious Freedom Restoration Act”; and

WHEREAS, a diverse coalition of over 400 businesses across Georgia, many located in the City of Atlanta and on the Fortune 500 list, have signed a petition to the Georgia General Assembly and Governor opposing Senate Bill 129 and House Bill 757 or any other legislation that would allow discrimination against the LGBT community under the guise of “religious liberty”; and

WHEREAS, the City’s recent successes in corporate relocations as well as an ever expanding tourism business are predicated on knowing that Atlanta and all of Georgia welcomes them and embraces them; and

WHEREAS, these two pieces of legislation also pose a risk to our City and State’s reputation as an international business hub, our growing reputation as the “Hollywood of the South”, and our thriving convention and hospitality industry; and

WHEREAS, on Wednesday, March 2, Georgia Unites Against Discrimination a bipartisan grassroots campaign dedicated to protecting LGBT Georgians from discrimination delivered a petition with over 75,000 signatures opposing any efforts to enshrine discrimination in Georgia Law to the Governor; and

WHEREAS, three days after the 75,000 letters were delivered, Gov. Nathan Deal released his strongest statement yet against the so-called ‘religious-liberty’ bills, saying he would reject any bill legalizing discrimination; and

WHEREAS, the Atlanta City Council would like to join Governor Nathan Deal and other reasonable voices in opposition to Senate Bill 129, House Bill 757, or any other discriminatory legislation that sends a message that Georgia isn’t the best place to live, work, and do business for all people.

NOW, THEREFORE, BE IT RESOLVED BY THE COUNCIL OF THE CITY OF ATLANTA, GEORGIA, requests that the Georgia General Assembly defeat and/or the Governor Veto House Bill 757 (“Exhibit A”) and Senate Bill 129 (“Exhibit B”) so that Georgia can remain a welcoming place with a reputation as the best place to work, visit, and do business.

BE IT FINALLY RESOLVED, that the Municipal Clerk shall distribute a true copy of this Resolution to the Governor, Lt. Governor, and all Members of the Georgia General Assembly.